Accessibility links
The Musical 'Seeds' of Jesca Hoop Unsigned and living in a van, Hoop took the Los Angeles area by storm with only a demo recording. Several years later, she has a fully fleshed-out major-label album, one that draws on sundry sounds and shape-shifting voices. 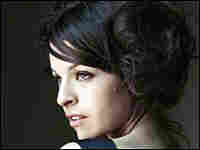 Jesca Hoop grew up in a musical family, and then spent years as a nanny for another musical family: that of Tom Waits. Frank Ockenfels III hide caption

Hear the full-band album versions of the songs Jesca Hoop performed at NPR:

A few years ago, radio host Nic Harcourt played a song called "Seed of Wonder" on his influential show Morning Becomes Eclectic on KCRW in Santa Monica, Calif. The audience response was unprecedented.

Listeners enjoyed it so much, it set an unofficial record for the show: It was one of the top five most requested songs for two months running. The singer didn't have a record deal at the time — she had sent a rough demo. At the time, she was living out of a van.

That singer is Jesca Hoop, who has recorded a different version of "Seed of Wonder" for her major-label debut Kismet. She sat down with Melissa Block to discuss her craft and her new album.

Hoop grew up in a large and musical Mormon family in Northern California. For five years, she worked as a nanny for the children of gravelly voiced singer Tom Waits, who helped pass her demo along to get that record deal.

Hoop describes her songs as having a wardrobe around them — a "landscape," or an "architecture" — and she uses diverse sonic building blocks to construct the songs on Kismet. For example, listeners might hear the winding of a jewelry box, or a film projector, or crows, or a sound that bassist Ian Walker generated to simulate a rope being pulled across a boat.

"The Beatles and Kate Bush: I love how they bring [in] outside elements," Hoop says. "There's a theatrical aspect, kind of a soundscape they create from using outside sounds — sounds from the outside world."

As varied as its sonic palette is, Kismet is also full of Hoop's mutable voice, which frequently morphs into different registers, filters and colors.

"I love that about singing — you get to do whatever you want with your voice," she says. Hoop compares the process to acting. "I think I indulge in that area," she says, "because we're not one thing: We're many, many different things, and we should be able to take advantage of all the different characters we have within us."

That internal monologue is present as Hoop devises her songs in her head. She doesn't write down her tunes until they're fully formed, the result of constant singing to herself.

"I usually am able to hold on to that one — the seed of the song," Hoop says. "And then I keep singing that seed until the seed gets a sprout, and then I just sometimes have to try to remind myself to push the sprout through and start the next section."

And her recent success? "I have real good luck with holding on to the essence of a song," she says.