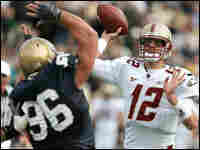 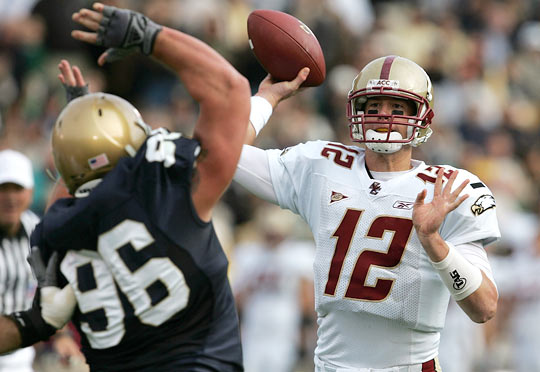 OK, all of the ballots are in for this week's influential National Public Radio college football poll. Well, actually, I'm the only one with a ballot in the NPR Poll. Everybody else at NPR has more important things to attend to. And here's the news: The voters have decided to call off the poll for 2007.

Instead, the official NPR Poll has decided that any team that wants to can declare itself the national college football champion this year.

Hey, this makes about as much sense as the actual system which was, I believe, designed by the same people who are arranging the 2008 primary election schedule, wherein, based on polls and computers and the entrails of small animals, two teams are selected to play for what is the national invitational championship.

Now, this athletic version of reductio ad absurdum is a ridiculous way to run a sports competition. In sports, you must earn your way to triumph upon the field of battle — not with the support of somebody else's slide rule.

Oh yes, in some years, such as 2005, when Texas and USC faced off, two teams are demonstrably head and shoulders above the rest. But this year, either there are a lot of very good teams or no good teams at all. Whichever, parity, thy name is chaos. No fair or rational system can choose just two teams to play for the title. Dancing with the Stars is a more genuine athletic competition.

So that is why the NPR Poll is declaring that everybody is national champion this year. Even Notre Dame. We're No. 1! Every team in the nation will be awarded the new T. Boone Pickens Trophy, named after the billionaire who has donated $265 million to his alma mater, Oklahoma State University. Well, excuse me, the $265 million didn't quite go to the university, just to the athletic program. But for that generous bounty to the cause of higher education, Mr. Pickens certainly deserves to be honored for his ability to keep things in perspective.

But boy, wouldn't it be great if we had a football playoff this year, like March Madness in basketball? There's no telling who could win.

Hawaii is an undefeated contender. Who even knew they played football in the islands? Do they have tailgate luaus? Boston College is also undefeated. A New England college football team? That's like German perfume. Kansas, strictly a basketball school, is undefeated. And not only that, Kentucky and UConn are gridiron juggernauts, too. What, are they using the backdoor offense?

And the big game this past week was between South Florida and Rutgers. What? This is like you woke up some morning and found out that Dennis Kucinich and Duncan Hunter have gone ahead in the polls. South Florida didn't even field a football team until 10 years ago, but if we had an honest football playoff, the nouveau Bulls would have a real chance to play for the title. And that's the American way — not the NCAA way.