Accessibility links
Fabled Santa Ana Winds Fuel Wildfires in California The Santa Ana winds driving California's wildfires are fabled. Some call them the Santa Anas and others call them the devil's breath. While they make the winters warm and pleasant by blowing the worst air pollution out to sea, they can also spawn massive infernos.

The massive wildfires in Southern California have been fanned by notoriously hot, dry winds that move through the region every fall and winter. Some call them the Santa Anas. Others call them the Devil's Breath. Since Sunday they have been blowing at near record speeds.

These winds begin when masses of cold air form over high desert plateaus in Utah and Nevada. The winds that spin off of these high pressure systems grow warmer, dryer and stronger as they spill south and west, down through mountain canyons towards the ocean.

When the winds are moderate, they blow air pollution out to sea and make life in Southern California more pleasant. But last week, after a gigantic mass of air formed over the high plateaus, the Santa Ana winds turned into monsters.

Mike Davis, a historian from the University of California, Irvine, says the high speed winds, rushing into canyons, produced "literally a blast furnace effect at the other end of the canyon."

That is what happened on Sunday, he says, when fires burned all the way to the beach.

Malibu is one of several towns and cities ravaged by the wildfires. Those fires have been fanned by a set of Santa Ana winds that is among the most ferocious since the government started keeping records in the 1930s.

"It's probably up there in the top five, as far as wind speeds go," says Eric Boldt, a meteorologist with the National Weather Service.

He says one monitoring point, just above the Point Mugu Air Station, measured winds traveling 111 mph. Winds at another point reached 108 mph. That is the speed of winds in a Category 2 hurricane.

"Not every place felt that, obviously, but many areas did see winds of 40 to 60 mph, and that's like a tropical storm or Category 1 hurricane," Boldt said.

Worst May Be Over

Weather experts say they do not know exactly why the recent spate of Santa Ana winds has been so hellish, nor do they know whether more freakish winds and fires will arrive during the coming winter.

But Robert Fovell, an atmospheric scientist at the University of California, Los Angeles, says he has a hunch that the worst is over.

Fovell says the biggest question now is when the next big rains will come, if they come at all. For more than a year, the region has been mired in a severe drought. 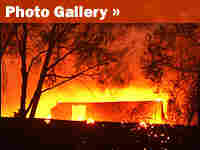 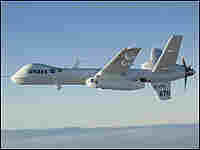 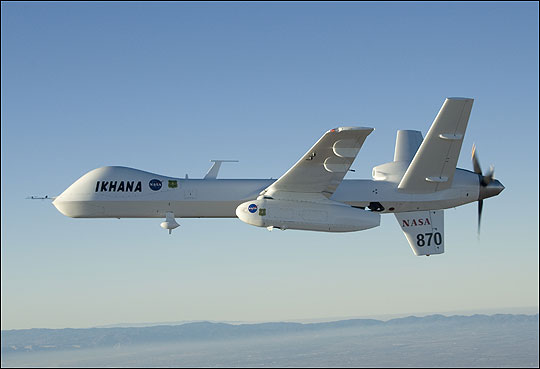 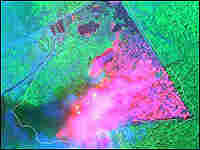 Infrared sensors on the Ikhana drone can penetrate smoke and relay crucial data about the fire. Courtesy of NASA hide caption 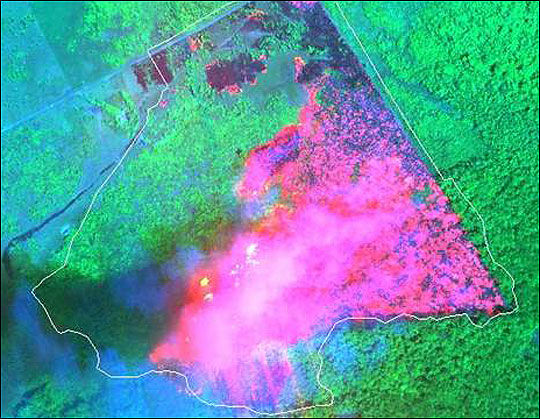 Infrared sensors on the Ikhana drone can penetrate smoke and relay crucial data about the fire.

Fire crews battling the wildfires sweeping across Southern California have been joined by a new colleague: a pilotless plane based on military technology. Onboard infrared sensors will relay data about the fires, via satellite, to firefighters on the ground.

The drone is called the Ikhana, which means "intelligent" in the Native-American Choctaw language. It's 36 feet long and is controlled by technicians at Edwards Air Force Base in the Mojave Desert.

Thermal imaging isn't new — the technology has been around for some 30 years — but mounting the sensors on drones is a much more recent development. It was first used last year in California. This will be the drone's most important assignment to date.

The advantage of the drones is that they can stay airborne much longer than conventional aircraft — up to 20 hours, says Everett Hinkley, program leader with the U.S. Forest Service's Remote Sensing Applications Center in Salt Lake City. The Ikhana drone is a version of the Predator drones used by the U.S. military overseas, he says.

The infrared sensors can penetrate smoke and relay crucial data about the fire — size, intensity and the direction it's moving — to firefighting crews on the ground. "They produce daily maps for the battle plan," says Everett.

"It's extremely useful information, and you can do this through the smoke, which is a big advantage," adds Compton Tucker, a senior Earth scientist with NASA.

Those involved in the fire sciences, as the field is known, distinguish between strategic and tactical information. Satellites provide broad-brush strategic information about the fires in a given area. But the satellites pass overhead only twice a day. That makes them of little value to firefighters battling fast-moving blazes, like those currently burning in Southern California. Airplanes, and now drones, provide much more useful, real-time information.

Other technological advances also help crews contain wild fires: C-130s, the military cargo plane, have been refitted with side-mounted water-cannons that shoot precise streams of flame retardant. A newly designed intake hose for helicopters can douse fires with 2,000 gallons of water slurped in 30 seconds from ponds, rivers and the ocean.

One of the more promising technologies, still in the research stage, is "fire-behavior modeling." The idea is to measure the "fuel content" of a forest — in other words, how much timber and brush is in the path of a fire — and then determine in which direction, and how quickly, it's likely to grow.

Despite these advances, the basic strategy of fighting a wildfire has not changed in decades. Firefighters try to encircle the fire and cut it off from fuel sources — to starve the fire — while dousing it from the air with flame retardants. It is labor-intensive, exhausting and often dangerous work. Last year, five firefighters were killed battling a Southern California mountain fire.

"Fundamentally, the way we go about putting out fires is the same as it was 70 years ago," say Murry Taylor, a former firefighter and author of Jumping Fire. "Yes, we have better tools, the fire engines are bigger, the crews are better trained and the aircraft are more modern. But we're dealing with Mother Nature, and she dances a mean boogie."

Thermal imaging is helpful, says Taylor, but he doubts it will be of much use in battling the rapidly moving wildfires sweeping across Southern California now.

"It's valuable data where the weather is not too extreme, but when it gets into this situation now, it's worthless," he says. "In five minutes, the data won't be worth a damn."