Accessibility links
Sharon Jones' '100 Nights' of Heartache Sharon Jones and the Dap-Kings' "100 Days, 100 Nights" is about love, not some supersized flood; according to the singer, that's how long it takes for a man's heart to unfold. Meanwhile, her dynamite backup band chips in the brassy punctuation marks. 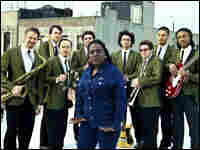 The horns slide down a chromatic run, all sad and blue. It sounds as if "100 Days, 100 Nights" will be a downer — like the band is going to launch into "The Volga Boat Song" or something. Then in jumps Sharon Jones, queen of retro funk, who was once told that she was too short and too dark-skinned to be a star, but kept on singing anyway. The tempo quickens, and the gut-wrenching force of her voice wipes away the sorrowful intro.

Also the title of Jones' new album, "100 Days, 100 Nights" is about love, not some supersized flood. According to the singer, that's how long it takes for a man's heart to unfold. Her longtime backup band, the dynamite Dap-Kings, chips in the brassy punctuation marks. (If the group's horn work sounds familiar, that's because it helped propel Amy Winehouse to stardom earlier this year.)

Halfway through her rousing sermon, Jones stops and tells herself: "Wait a minute... Slow it down just a little." The wait-a-minute-slow-it-down may be one of the oldest tricks in the soul-music book, but she makes it seem as if it just occurred to her for the first time ever. The pace does indeed diminish, but the intensity of her delivery quintuples as it turns out that — even after 100 days and 100 nights — her man is nowhere to be found.