Accessibility links
For Percussion Projects, the Beat Goes Unevenly On The cliché about a catchy song: "It's got a good beat, you can dance to it." But things get more complicated when the beat is all there is to it. Two recent albums put the percussion front and center: Batterie, from Loop 2.4.3, and Global Drum Project, with Grateful Dead drummer Mickey Hart and tabla master Zakir Hussain.

Listen
For Percussion Projects, the Beat Goes Unevenly On 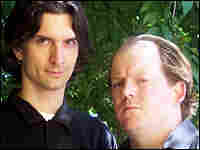 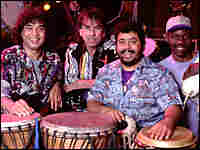 About the only constant in the last 50 years of popular music is that it's become more and more aggressive with rhythms. And yet I find I have problems with most percussion albums. I wouldn't hesitate a moment to tell anyone to go see a dramatic, inspirational live performance by the Kodo drummers of Japan. Yet even a DVD diminishes the power of their music — and the recordings are even more beside the point.

Percussionists are aware that it's hard to make an all-rhythm album interesting. A common solution is to add embellishments — other instruments, voices — while keeping the beats central. Another is to draw on established, familiar world-rhythm traditions. That's what Grateful Dead drummer Mickey Hart and Indian tabla master Zakir Hussain do on their new Global Drum Project.

A much tougher approach is to reinvent percussion from the bones out, so that drums and other beat-makers surprise you, throw you off base and draw you into a vortex of pulses. This is what the oddly named duo Loop 2.4.3 does on its debut release, Batterie.

Hart and Hussain's fusion project is smart, honorable and admirable — maybe more admirable than purely pleasurable — though they certainly do work up some mysterious mojo at times. I kept wondering, though: Why does Global Drum Project work best percolating away in the background? When I focused in, track by track, the underlying concept of world rhythms being universal and unifying seemed strained, even false. One African tune, one Indian tune, a Latin track and a couple of mild fusions do not add up to an identity.

Hart and Hussain have worked together a very long time, releasing their first collaboration as the Diga Rhythm Band back in 1976. Global Drum Project isn't as fresh — or as much fun. Diga is considered groundbreaking for a reason. Start there.

Loop 2.4.3 is Thomas Kozumplik and Lorne Watson, and while the two have worked together as a unit only since 2001, they have an extensive background with numerous ensembles, notably Kozumplik's quartet, Clogs. But what jumped out at me is that Loop 2.4.3 is in residence this fall at the Harry Partch Institute. Partch was an outsider classical composer who invented his own instruments, most of them exotic percussion tools. He also wrote incidental music for plays.

Not coincidentally, Kozumplik has worked for film and theater. And that's as close as I can come to describing Loop 2.4.3's style — if Partch had been warmer, more linear and had a better sense of dramatic narrative, he might have made music like this.

Loop 2.4.3's Batterie works best as foreground music, following the beat stories as they develop. Just when you think you know what's coming, a wash of glockenspiel or gongs throws you off. Most impressive, Kozumplik and Watson never sound arbitrary or like makers of novelty music. There are action adventures and reveries on Batterie, and it all sounds like part of a well-thought-out tradition. Only the tradition has never existed until now.