Accessibility links
Few Indian Chefs Still Cook in the Courtly Tradition Nawabi cuisine is part of a centuries-old Indian tradition, where dozens of spices are used and unexpected dishes are created. This involved style of cooking is a fading tradition in India. 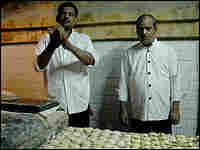 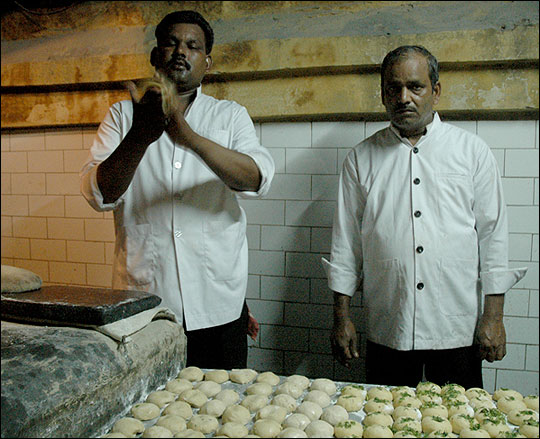 Kitchen workers in the Indian city of Lucknow prepare dough for making Indian flatbread, called naan. Lucknow is famous for its opulent feasts. 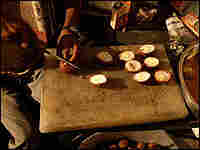 Kitchen workers in Lucknow craft eggs wrapped in minced meat for a Nawabi feast. Part of a centuries-old tradition, Nawabi cooking is heavy on cream and oil, and incorporates dozens of spices. David Kohn, for NPR hide caption 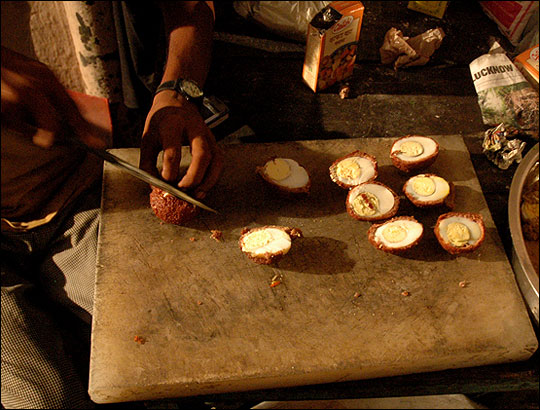 Kitchen workers in Lucknow craft eggs wrapped in minced meat for a Nawabi feast. Part of a centuries-old tradition, Nawabi cooking is heavy on cream and oil, and incorporates dozens of spices. 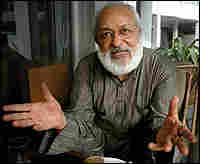 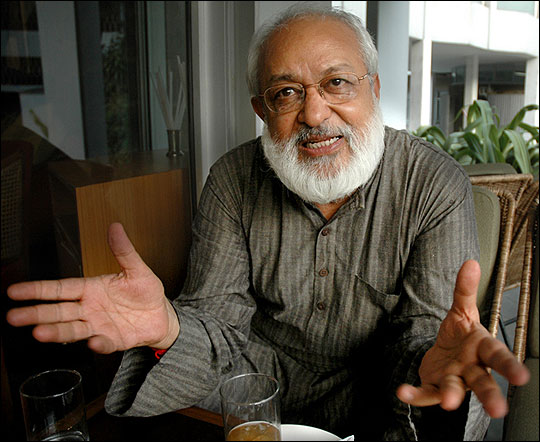 Pushpesh Pant, an Indian food lover, worries that the fine art of Nawabi cuisine is disappearing.

For hundreds of years, the Indian city of Lucknow has been famous for its opulent cuisine traditions, which are still practiced by a few chefs.

Most of these chefs trace their culinary lineage back to their grandfathers and beyond.

Until the British arrived on the scene, Lucknow and the surrounding area were controlled by Nawabs. Incredibly wealthy, each Nawabi ruler had a team of chefs, who competed to create the most sumptuous meals. Theirs was a luxurious style of cooking — heavy on cream and oil, marinated meat and innumerable spices.

"The first thing I would say is that it had to be exotic. It had to be unexpected," says Pushpesh Pant, an eminent Indian foodie. "Say you eat a dessert, and you say 'Is this reduced milk? Is it eggs?' And the host would say, with a twinkle in his eye, 'No, it is grated potatoes.'"

These "riddle dishes" were central to Nawabi cuisine. At one 19th-century feast, cooks used sugar, honey and other sweets to create an entire riddle meal. Desserts masqueraded as entrees like kebabs, curries and even whole fish.

Pant compares these chefs to composers blending many instruments into a symphony.

"Even a simple, everyday dish would use, shall we say, instead [of] three or four spices, every day, it would change and would include 30 odd spices, condiments [and] flavoring agents," Pant says. "But what would always be [essential] there is an aromatic spice, which is dominant. ... It is, again, like music."

But Indian epicures worry that Nawabi knowledge is disappearing. Pizza Hut and McDonalds are increasingly popular in India, and modern life isn't conducive to armies of chefs and recipes that require days to prepare.

Now, the Nawabi lifestyle is no more. One of the few places left to get the food is Dum Pukt, a five-star restaurant in the Delhi Sheraton. The hotel's chef, Gulam Qureshi, comes from a long line of Nawabi chefs.

The culinary odyssey begins with something called kakori kebabs, made with lamb and topped with a thin layer of silver leaf — made from real silver. The metal is so thin that it isn't actually worth much, but the simple fact that the Nawabs gilded their food tells you something about the level of luxury. The metal seems to not add any flavor, but for these kebabs, which were so full of texture, the taste needed no boost. The kebabs were smooth—almost like a liquid—flowing down your throat.

Qureshi keeps his recipes secret, but he does share a couple of key steps to his cooking. He uses 22 spices, though he doesn't disclose which spices. He minces the meat to give it a kind of gooey texture.

Qureshi serves five luscious courses. Among the courses were kundun kalia, a succulent lamb curry made with yogurt and almond paste topped with a gold leaf; subz milani, a delicate puree of vegetables; and shai tikla, a creamy yet understated dessert made with milk, sugar, and crushed rose petals.

The most remarkable dish was murg kush purda, a rice and lamb dish covered with a blissful bread — and cooked for hours in a thick, metal pan on a low flame.

The Sheraton's Tejinder Singh explained how the bread was added in layers to the dish.

"The top is a crisp layer. It's so crisp it can become powder," Singh says, adding. "[It's] like a croissant. The base is like, you can stretch it out. That's because from under, it's being cooked by steam and from the top it's getting dry heat."

Remembering a Culinary Past

"It was very luxurious. ... Economic restraint was not there. There were several dishes in breakfast and lunch and dinner," Khan says.

These days, Khan has only one cook, and he has had to sell off most of his palace. But a few times a year, he throws a Nawabi dinner party. He invites some friends and a few tourists eager for a real regal meal. Afterwards, of course, it's back to less fantastic fare. But Khan still has his lavish memories.

"That sort of life is like a dream now, and you cannot imagine at this hour and time that you can live such a life," Khan says.