Accessibility links
Despite Worries, Psychiatric Hospital Bans Smoking Smoking has been part of life in psychiatric hospitals for decades. Now, one such hospital faces the challenges of promoting a smoke-free environment. 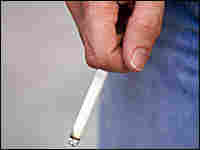 Smoking bans have taken hold in workplaces, restaurants and hospitals around the nation. But as recently as last year, a survey showed that 59 percent of psychiatric hospitals in the United States still allowed patients to smoke.

In recent months, though, some state psychiatric hospitals have taken steps to ban patient smoking.

St. Elizabeth's in Washington, D.C., is one such institution. It declared plans to go cigarette free in January of this year.

Patrick Canavan, the CEO of St. Elizabeth's, announced the policy and said that while some of the staff welcomed the change, many feared what would happen. For decades, cigarettes have been used to control patient behavior at the hospital. If a patient acted out, cigarette privileges were denied. If they calmed down, they would get a smoke.

"[The staff] said, 'You know we're going to have more instances of aggressive behavior. We're not going to be able to help people calm themselves down,'" Canavan says. "And that is a real worry. You know, 15 minutes out of every hour was dedicated to smoking."

But it was more than that. Canavan says some of his staff argued that it just wasn't fair to the patients to take their cigarettes away.

"The attitude was people who are mentally ill have so few things in life that are enjoyable to them. They don't have significant relationships, they may not have a home, they don't have meaningful work. If this is something that is pleasurable, why would you even consider taking it away?" Canavan says.

Many of the patients at St. Elizabeth's also reacted strongly to the news of the smoking ban. One patient told Canavan that he would only be able to quit if he were confined to a maximum-security ward, so he would not have access to cigarettes.

But Canavan and others at St. Elizabeth's have said that the smoking ban went much more smoothly than anyone — staff and patients — anticipated. Week by week, cigarette breaks were reduced. There were smoking-cessation programs, patches, pills, gum. According to one staff member, Beth Gouse, who worked as a psychologist at St. Elizabeth's for 14 years, when the first totally smoke-free day finally arrived two months ago, it was actually all right.

"I think it's ended up being not as difficult as we thought it would be," Gouse says.

But not all of St. Elizabeth's patients have stopped smoking. Some of them go home on weekends and smoke there. Some have privileges, which means they're allowed to leave the campus for a while in the afternoon, and they smoke then.

But, Canavan says, 100 percent of the patients at St. Elizabeth's have, at a minimum, cut down on how much they smoke. And some patients have stopped altogether. Since mentally ill people die on average of 20 years earlier than non-mentally ill people, and since smoking is partially responsible, Canavan thinks the smoking bans he and others are beginning to implement are a good thing.

But not everyone agrees with Canavan's position.

"At this point in time, we have no confidence that smoking bans are going to serve the best interests of patients, and we can't support them," says Ron Honberg, a spokesman for the National Alliance on Mental Illness. The organization has more than 1,000 affiliates in the United States.

Honberg says his organization supports the idea that mentally ill people, like everyone else, should stop smoking. But, he says, mentally ill people go to psychiatric institutions at their most vulnerable point, and it's just wrong to force them to quit when they're in such crisis.

Honberg explains that part of the fear is that if institutions go smoke-free, mentally ill people will no longer be open to getting institutional help.

But it may be that such fears about smoking bans are misplaced. One afternoon last week, across the street from the front gates of St. Elizabeth's, a small crowd of patients gathered to smoke a few cigarettes during their short afternoon break. Standing on the sidewalk, a woman named Juliette explained that patients at St. Elizabeth's still secretly smoke on campus. They'll sneak into a bathroom, or behind buildings. And, Juliette says, every ward has at least one cigarette dealer.

"One lady sneaks them in her hair. She gets a braid and pokes it up on the top and sticks cigarettes in it," Juliette says.

At first, Juliette hated the idea of the ban, but she thinks it has gone much better than she expected.

"Actually, most people have kept their cool for the most part. For the most part, the smoke-free thing has been a success. I think the patients have been a little more responsible than anybody gave them credit for," she says.

As for Canavan, he has no doubt that the smoking ban is good and that it's working. He says he got confirmation of his belief in the plan when he ran into an old friend a few days after the ban began.

"There is this one particular nursing staff member who I have known since I was a little psychologist here at St. Elizabeth. She's tough and she tells it like she sees it all the time. And she said to me one day, 'You know, baby, you might be right.' and I thought, if she's willing to give me that much, we're going to be OK."