Accessibility links
Smoking Bans Help People Quit, Research Shows Smoking bans are on the rise across the country in workplaces, restaurants and bars. Research shows these bans decrease the overall number of cigarettes people smoke and in some cases, actually result in people quitting. 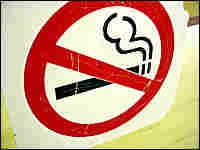 Smoking bans help lessen the urge to smoke by decreasing exposure to nicotine, and by 'de-normalizing' the behavior. iStockphoto.com hide caption

Some state psychiatric hospitals are taking steps to ban patients from smoking, and the transition isn't as difficult as many expected.

Nationwide, smoking bans are on the rise in workplaces, restaurants and bars. Research shows that bans decrease the overall number of cigarettes people smoke and in some cases, actually result in people quitting.

One reason bans help people quit is simple biology. Inhaling tobacco actually increases the number of receptors in the brain that crave nicotine.

"If you had a smoker compared to a nonsmoker and were able to do imaging study of the brain, the smoker would have billions more of the receptors in areas of the brain that have to do with pleasure and reward," says Richard Hurt, an internist who heads the Mayo Clinic's Nicotine Dependence Center.

So, removing the triggers that turn on those receptors is a good thing.

"If you're in a place where smoking is allowed, your outside world is hooked to the receptors in your brain through your senses: your sight, smell, the smoke from someone else's tobacco smoke or cigarette. That reminds the receptors about the pleasure of smoking to that individual, and that's what produces the cravings and urges to smoke," Hurt explains.

Hurt adds that bans help decrease the urge to smoke in another way: They de-normalize it. For example, where smoking is considered the "norm" — as it was in so many countries in Europe for so long — more people smoke. In places where smoking is no longer the "norm"-- in California, for example — there are fewer smokers.

Research shows that nicotine replacement medications — like nicotine gum, patches or inhalers — double a smoker's chances of quitting. So do counseling and therapy. Add a smoking ban, and Hurt says the chance of successful quitting is even better.