Accessibility links
Pop-Rock Bliss, Familiar and Timeless The Lodger's "Kicking Sand" works with well-worn ingredients (memorable guitar hooks, a thumping bass line) without adhering to a single sound or era: Siddall's sweet voice even calls to mind Peter Noone from Herman's Hermits. The result begs to be played to excess. 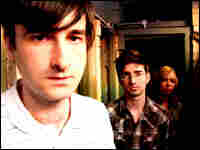 The U.K. band The Lodger makes the most of its basic ingredients. Photo courtesy of The Lodger hide caption

London and Manchester may have the vaunted musical history, but Leeds has become a major hotspot for all things Britpop, thanks to the success of bands such as Kaiser Chiefs and the local Dance to the Radio label. The latter has been responsible for supporting bands through its popular compilation CD series, which is where The Lodger made its official debut in 2005.

"You say we're in the same boat / I'm not in yours / I couldn't care less about your life," singer-guitarist Ben Siddall sings in the biting refrain to "Kicking Sand." A slab of unadulterated pop-rock bliss, the song takes familiar ingredients (memorable guitar hooks, a thumping bass line) and gives them an air of timelessness: Siddall's sweet voice even calls to mind Peter Noone from Herman's Hermits. "Kicking Sand" begs to be played to excess — and stands up to the repetition.

Album
The Grown-Ups
Artist
The Lodger