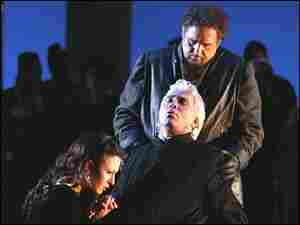 If Giuseppe Verdi had done nothing more than compose operas, he'd still have been one of the most admired figures in Western music. But Verdi was more than just a great composer — he was also a great man.

The composer lent his wealth and reputation to any number of causes — some of them quite risky. Politically, his work and personal integrity helped to inspire a generation of Italians in their struggle for independence, and he often faced the wrath of government censors as a result. He was even urged to run for public office, and he was popular enough to have won handily.

All of this was serious business, to match Verdi's personality. He wasn't exactly a barrel of laughs. Of his more than two dozen operas only two were comedies, and one of those was his very first opera — seldom heard today.

Still, even Verdi himself once referred to the opera we've got here as, "too sad and desolate." It's the somber, historical drama Simon Boccanegra, named for a real life Doge of Genoa who lived in the 1300's. The story is almost unrelentingly gloomy. The opera has no moments even approaching levity and the whole thing has an air of death about it right from the start.

But don't let any of that scare you away. Simone Boccanegra also has a tremendously complex and sympathetic title character, and some of the most beautiful music Verdi ever wrote. What's more, World of Opera host Lisa Simeone brings us a Houston Grand Opera production featuring Dmitri Hvorostovsky, one of the most outstanding baritones in the world today.

The Story of 'Simon Boccanegra' 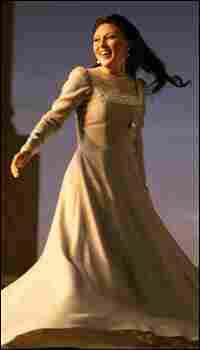 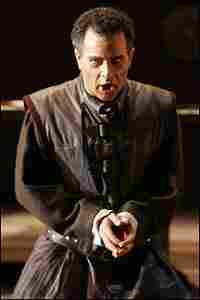 Nearly 25 years later the composer had another go at it, this time enlisting librettist Arrigo Boito. (Boito also wrote the librettos for Verdi's Otello and Falstaff, giving him a pretty good resume, too.) Both composer and librettist thought Boccanegra was too gloomy and they needed to lighten it up a little. Their revision did little to make the opera lighter, but it did make it better.

Among many other changes, Boito added the famous Council Chamber scene. It's a sequence the younger Verdi might have struggled with in the 1850s. By 1880, its potential for complex ensembles, vivid characterization and high drama was right up Verdi's alley.

PROLOGUE: The action beings in a square at night, where Simon agrees to be a candidate for Doge, or leader, of Genoa. He'll represent the commoners against in a contest against the candidate of the noblemen.

The orchestra plays a beautiful, innocently soaring string theme as Boccanegra enters Fiesco's home, looking for Maria. He finds her body just as the crowd joyfully announces his election as Doge.

The drama resumes 25 years later. Boccanegra is still the Doge of Genoa and has gained enormous power. Outside the Palace of Genoa's wealthy Grimaldi family, we meet the young woman Amelia Grimaldi. Boccanegra has banished the Grimaldi sons for subversive activity. Amelia is in love with a young nobleman, Gabriele Adorno, who arrives to speak with Amelia's guardian. The guardian is actually Fiesco, Boccanegra's longtime enemy, now living under an assumed name. Boccanegra's advisor Pietro interrupts, saying the Doge himself is approaching and would like to visit Amelia. She agrees.

As Amelia suspected, Simon wants her to marry his associate Paolo, and he offers to pardon her brothers if she'll agree. She's grateful, but says she's in love with Adorno. Anyway, she tells him, she's not really a Grimaldi by birth. She was taken in as a foundling, after the old woman who was caring for her died.

Considering this, Simon produces a locket with a picture of Maria, his long-dead lover. Amelia has the same picture in her own locket — it's a picture of her mother, whom she never knew. They both realize that Amelia is Simon's own lost daughter, and Verdi gives them a reunion scene that rivals even his own masterpiece Rigoletto in its portrayal of love between father and daughter.

Boccanegra leaves and abruptly tells Paolo to forget about marrying Amelia. But Paolo's not going to bow out quietly. He and Pietro plot to kidnap Amelia before she can marry Adorno.

Next is the famous scene in the Doge's Council Chamber. A group of plebeians is admitted with a grievance. They've apprehended two noblemen — Amelia's lover, Adorno, and her guardian, whom Simon still doesn't recognize as Fiesco. It seems Adorno has killed a Plebeian leader. Adorno says the man he killed had tried to abduct Amelia, on the orders of "a powerful person." Adorno assumes the Doge himself ordered the kidnapping and draws his sword to assassinate Boccanegra. The Doge's men prevent this and Amelia begs Simon not to harm Adorno.

Boccanegra agrees, at least until the whole kidnapping matter is straightened out. This enrages Paolo, which puts Simon in a tricky, political situation. But the Doge has a psychological trick up his sleeve. He rightly assumes it was Paolo who actually ordered Amelia's abduction. So he pronounces a deadly curse on the supposedly unknown kidnapper and forces Paolo to repeat that curse. The act ends as the superstitious Paolo knowingly curses himself, while dreading the possible consequences.

Paolo is left in a sort of double jeopardy. He's afraid of the curse and of what the Doge will do when he finds out what's been going on. Paolo decides that his only way out is to kill Boccanegra.

Paolo knows he'll never keep his power if he's known to be the Doge's assassin, but he wants to be doubly sure of Simon's death. First, he puts poison into Simon's carafe of drinking water. Then he summons Adorno and Amelia's guardian Fiesco, who are both being held in the palace as plotters against the Doge. Paolo suggests that Fiesco might just want to sneak up on the Doge while he's asleep — and murder him. Fiesco refuses and returns to his cell.

Paolo then tells Adorno that Amelia is in the palace, visiting Simon, implying that the two are lovers. Adorno finds this plausible — he doesn't know that Simon and Amelia are actually father and daughter. He confronts Amelia. She refuses to reveal her true relationship to Simon and Adorno is convinced that she's betrayed him.

Meeting with Simon in private, Amelia asks him to give Adorno clemency in return for political support. Simon agrees and Amelia goes off to find Adorno.

Alone, Simon drinks the water that Paolo has poisoned and falls asleep. Adorno appears. Unaware of the deal Amelia made, he's intent on killing Boccanegra. Amelia stops him. In a dramatic trio, Adorno finds out that Amelia is Simon's daughter. He asks for the Doge's forgiveness and vows his loyalty.

ACT THREE: Fiesco has been freed, as part of the Doge's deal with Adorno, and is now in a position of power. Paolo has been taken into custody and tells Fiesco that he has poisoned the Doge. He also admits that he's the one who planned Amelia's abduction. For his trouble, he's hauled off in chains.

The Doge himself appears, still unaware that he's been poisoned. Fiesco reveals his true identity, as father of Simon's long-dead lover, Maria. Simon can now accept the peace that Fiesco offered as the opera began and reveals that Amelia is his daughter, and Fiesco's granddaughter. Fiesco and Simon are reconciled, and Fiesco tearfully tells the Doge that Paolo has poisoned him.

After blessing the love of Amelia and Adorno, Boccanegra names Adorno his successor and dies.

The Music of Russia: Balalaikas and Baritones May 19, 2005