Accessibility links
The New Pornographers, a 'Real' Supergroup Critics have been calling The New Pornographers a supergroup for years. Meredith Ochs calls the designation a misnomer, though the vibrant pop arrangements of the band's new album Challengers lead her to reconsider her nomenclature.

Challengers is the fourth album from the indie-rock collective The New Pornographers. Courtesy of Matador Records hide caption

My Rights Versus Yours

The Canadian pop band The New Pornographers formed a decade ago as a side project for its members, who all belonged to other projects. Since then, critics have called the band a supergroup.

But calling The New Pornographers a supergroup is a misnomer.

For that matter, the band's name itself is a misnomer, borrowed from a Jimmy Swaggart quotation about music being "the new pornography." But supergroup? Not exactly. Though some of its fans might recognize them by sight, The New Pornographers are better known for making vibrant pop music inspired by '70s AM radio and '80s new wave.

On their new CD, The New Pornographers dial down the bounce factor of their earlier work. They lean more heavily on thoughtfully composed, magnificently arranged songs, mostly written by band leader Carl Newman. Newman is known for his love of big pop compositions. But there are a few surprises here, like the slinky riff and stealthy groove on "All the Old Showstoppers" that pull you into a symphonic explosion.

Though they formed in Vancouver, The New Pornographers offer an evocative snapshot of New York City on the song "Myriad Harbour," written by Dan Bejar. They capture the moments of epiphany that can be found by just standing still in the midst of New York's chaotic streets. You can imagine them, or maybe yourself, motionless and meditative as the city rushes by.

Carl Newman wrote the song "Go Places" for his new bride — he even put her first name in the lyrics. Instead of singing it himself, though, he hands it to country belter Neko Case: a smart move. With her strong, expressive voice, Case transforms what might have been mawkish or too sparse into a stunning moment.

And that's the beauty of The New Pornographers: their collaboration. When your bandmates can take your song far beyond what you can do by yourself, well, that's what I call a real supergroup.

The New Pornographers in Concert on All Songs Considered 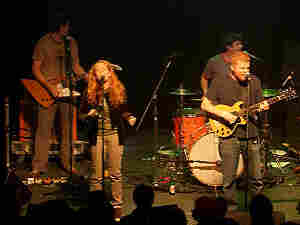 The New Pornographers performing live at the 9:30 Club in Washington, D.C. hide caption

With stunning vocals from Neko Case and playfully cerebral narratives from songwriters Dan Bejar and A.C. Newman, the Canadian band New Pornographers is virtually peerless in the world of power-pop and indie-rock. The New Pornographers gave a full concert on NPR.org Oct. 27, webcast live from Washington, D.C.'s 9:30 Club. Hear the performance online, with opening sets by Benjy Ferree and Emma Pollock.

The band is on tour in support of Challengers, its fourth full-length release. The disc is a melodic, hook-drenched collection of songs Newman says were inspired by his recent move to New York, finding love and the universal search for meaning. Though as passionate as the band's earlier work, Challengers feels slightly more wistful and melancholic.

On the album's title track, Newman sings about finding new love out of nowhere and trying to play it cool. "When I wrote the lyrics I thought of the Camus quote from the liner notes to a Scott Walker album," he says. "'A man's work is nothing, but this slow trek to discover through the detours of art, those two or three great and simple images in whose presence his heart first opened.'"

The New Pornographers is a collective of sorts, with members from several other popular Canadian bands. Newman is from the group Zumpano, while bassist John Collins is from Thee Evaporators and guitarist Dan Bejar moonlights in Destroyer. Keyboardist Blaine Thurier is a well-known cartoonist and filmmaker. Singer Neko Case has an established career as a solo artist. The New Pornographers also features Kurt Dahle on percussion, Todd Fancey on guitar and Kathryn Calder on vocals and piano.

Benjy Ferree is an artful singer-songwriter based in Washington, D.C. His 2006 album, Leaving the Nest, is loosely based in American roots music.

Emma Pollock is a former member of the Scottish pop group The Delgados who just released her solo debut, Watch the Fireworks.