Accessibility links
Officially Sanctioned: A Guide to the U.S. Blacklist Economic sanctions are an important—and controversial--foreign-policy tool for any U.S. administration. Currently, the U.S. has sanctions in place against a dozen nations. They range from "targeted sanctions" — aimed at the leaders of a regime — to blanket trade embargos against entire nations.

Officially Sanctioned: A Guide to the U.S. Blacklist

Officially Sanctioned: A Guide to the U.S. Blacklist 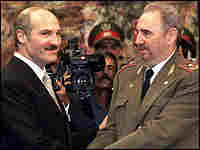 The United States has sanctions in place against a dozen nations. They range from "targeted sanctions," aimed at the leaders of a particular regime, to blanket trade embargoes against entire nations. Here is a look at some of the nations that currently face U.S. sanctions – and why the policies were put in place.

In place since 1962, the trade embargo against Cuba is among the strictest and longest-running of U.S. sanctions regimes. With rare exceptions, U.S. companies are forbidden from doing business with Cuba, and Cuban imports are banned in the United States. Travel restrictions are also in place, and most U.S. citizens are not allowed to travel to Cuba. Those who violate the sanctions face up to 10 years in prison and $250,000 in fines. "The basic goal of the sanctions is to isolate the Cuban government economically and deprive it of U.S. dollars," according to the U.S. Treasury Department. Some argue that the embargo has failed, since Cuban leader Fidel Castro remains in power. If anything, critics say, the embargo has strengthened Castro's hand, since it allows him to portray himself as a victim of U.S. "aggression."

Three days after North Korea launched a full-scale invasion of South Korea in June 1950, the United States invoked a total embargo on exports to North Korea. Economic sanctions, in one form or another, have been in place ever since. Following a North Korean nuclear test in October 2006, the United States tightened sanctions, imposing an embargo on luxury goods, including cognac, cigars, plasma televisions, beer, iPods, Rolex watches, diamonds, wine, yachts and Harley Davidson motorcycles. The idea was to pressure North Korean leader Kim Jong-Il, and his inner circle, who reportedly have a penchant for such luxury goods.

Also, using a little-known provision of the Patriot Act, the Bush Administration targeted a bank in Macau that North Korea had reportedly used to launder money. The action against Banco Delta Asia created a domino effect that resulted in two dozen financial institutions restricting their dealings with North Korea. The tactic may have helped persuade Pyongyang to return to the negotiating table. It recently agreed to dismantle its nuclear weapons program in exchange for U.S. economic assistance.

In 2004, the United States imposed a wide range of sanctions against Syria, accusing it of supporting terrorism and blocking efforts to stabilize Iraq. All U.S. exports to Syria are banned, except for food and medicine, and Syrian aircraft are barred from flying to the United States. The sanctions, though, are largely symbolic. No Syrian airliners flew to the United States anyway, and President Bush exempted telecommunications equipment, such as cellular phones, from the embargo, along with food and medicine. Syria has other friends with which to do business; Italy, Germany and France are Syria's biggest trading partners.

Concerned about the authoritarian regime of Belarusian President Alexander Lukashenko, President Bush imposed "targeted sanctions" in 2004. Following "fraudulent presidential elections," as former White House Press Secretary Tony Snow said, in March 2006, Bush extended those sanctions, freezing the assets of President Lukashenko and nine other Belarusian officials. He and his top aides are not permitted to travel to the United States and all Americans are barred from doing business with him. The sanctions, though, fall well short of a full-scale trade embargo.

In response to the recent crackdown on pro-democracy demonstrators, mainly Buddhist monks, President Bush announced new sanctions last month. He ordered the Treasury Dept. to freeze the U.S. assets of additional members of the repressive junta and those deemed responsible for "the most egregious violations of human rights." More than two dozen junta leaders are now barred from entering the United States. Bush also tightened controls on U.S. exports to Myanmar, also known as Burma. The new sanctions are largely seen as symbolic. Many of Myanmar's banks are in Singapore and China. So freezing assets in U.S. banks won't be very effective. The ban on entry to the United States will also have little effect unless the junta leaders have relatives studying in the country.

In 1997, citing Sudan's human rights abuses and support for international terrorism, President Clinton imposed a trade embargo and froze all assets of the government. Recently, President Bush ordered new, tougher sanctions, in hopes of pressuring the Sudanese government to halt the bloodshed in Darfur. The sanctions target government-run companies involved in Sudan's oil industry, and three individuals, including a rebel leader suspected of being involved in the violence in Darfur. It's not clear if the new sanctions will be effective; lately, Sudan has tuned to other nations for foreign investment, especially China, which is thirsty for oil to fuel its economic expansion.

Secretary of State Condoleezza Rice once called Zimbabwe "an outpost of tyranny," and the United States has worked actively to isolate the regime for the past few years. Sanctions have been in place since 2002. They are "targeted sanctions" aimed at Robert Mugabe and members of his Zanu-PF party. The idea is to punish Zimbabwe's leaders without harming ordinary citizens. In 2003, President Bush issued an executive order freezing assets held in the United States by 75 high-ranking Zimbabwe officials. The United States also cut off all non-humanitarian foreign aid. Mugabe routinely blames his country's economic problems on the United States — a dubious claim, analysts say, since the sanctions do not prohibit trade between the United States and Zimbabwe.

The United States also has sanctions in place against The Democratic Republic of Congo, Cote d'Ivoire and several Balkan nations.