Accessibility links
In Manifesto, Ministers United Against Intolerance Fifty years ago, 80 white pastors in the Atlanta area took on segregationists in the Deep South. They took their beliefs to the front page of Atlanta's main newspaper in 1957, issuing what has been called The Ministers' Manifesto. 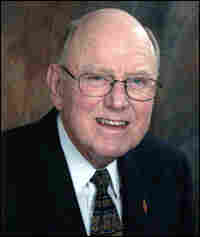 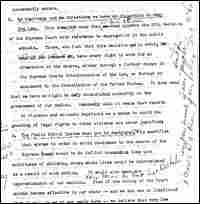 An early draft of The Ministers' Manifesto. hide caption

Source: The Regional Council of Churches of Atlanta 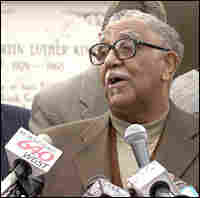 Brown v. Board of Education
The March on Washington

"Hatred and scorn for those of another race, or for those who hold a position different from our own, can never be justified. It is only as we approach our problems in a spirit of mutual respect of charity, and of good will that we can hope to understand one another, and to find the way to a cooperative solution of our problems."

Fifty years ago, 80 white pastors in the Atlanta area took on segregationists in the Deep South. They took their beliefs to the front page of Atlanta's main newspaper in 1957, issuing what has been called The Ministers' Manifesto.

It was an appeal for peace during the debate over integration, when the state of Georgia weighed closing its schools rather than allow black and white children to attend them together. The ministers issued their statement on Nov. 3, 1957, after mobs had partially shut down Central High School in Little Rock, Ark.

Jones says his parishioners weren't surprised by the manifesto because he had been "preaching on the issue," though they were "curious" about the tactic. "But I got some awfully, awfully hot letters from the public and some phone calls," he adds.

"Considering the environment and the times in which they issued a statement, it was a bold statement," Lowery says.

Read today, the manifesto sounds "mild and extremely cautious," Lowery says. "But at that time, it was a strong statement and we welcomed it for we needed leadership from the church."

The statement never explicitly condemned segregation, but nevertheless it had a "sobering and calming effect on people across the South," Lowery says.

Today, more progress is needed on the desegregation of schools in Atlanta and other cities, Lowery says.

"Of course, we're not satisfied because we haven't reached the maximum potential of brotherhood and justice in this country," he says. "But these ministers were more courageous than white ministers generally are today. We simply do not hear the calming, prophetic voices that this statement represented a half-century ago."

Jones says the manifesto should be celebrated as "an example of the kind of influence and impact that the church should have" as a force for unity on civil rights issues.

Jones and Lowery are scheduled to speak about the Minister's Manifesto this weekend in Atlanta.

THESE ARE DAYS of tremendous political and social tension throughout our entire world, but particularly in our nation and beloved Southland. The issues which we face are not simple, nor can they be resolved overnight. Because the questions which confront us are on so many respects moral and spiritual as well as political, it is appropriate and necessary that men who occupy places of responsibility in the churches should not be silent concerning their convictions.

The signers of this statement are all ministers of the Gospel, but we speak also as citizens of Georgia and of the United States of America. We are all Southerners, either by birth or by choice, and speak as men who love the South, who seek to understand its problems, and who are vitally concerned for its welfare.

In preparing this statement we have acted as individuals, and represent no one but ourselves. At the same time we believe that the sentiments which we express are shared by a multitude of our fellow citizens, who are deeply troubled by our present situation and who know that hatred, defiance and violence are not the answer to our problems, but who have been without a voice and have found no way to make their influence effective.

IN PRESENTING our views for the consideration of others we can speak only in a spirit of deep humility and of penitence for our own failures. We cannot claim that the problem of racial relationships has been solved even in the churches which we serve, and we are conscious that our own example in the matter of brotherhood and neighborliness has been all too imperfect. We do not pretend to know all the answers.

We are of one mind, however, in believing that Christian people have a special responsibility for the solution of our racial problems and that if, as Christians, we sincerely seek to understand and apply the teachings of our Lord and Master we shall assuredly find the answer.

We do not believe that the South is more to blame for the difficulties which we face than are other areas of our nation. The presence of the Negro in America is the result of the infamous slave traffic-an evil for which the North was as much responsible as the South.

WE ARE ALSO conscious that racial injustice and violence are not confined to our section and that racial problems have by no means been solved anywhere in our nation. Two wrongs, however, do not make a right. The failures of others are not a justification for our own shortcomings, nor can their unjust criticisms excuse us for a failure to do our duty in the sight of God. Our one concern must be to know and to do that which is right.

We believe that the difficulties before us have been greatly increased by extreme attitudes and statements on both sides. The use of the word "integration" in connection with our schools and other areas of life has been unfortunate, since to many that term has become synonymous with amalgamation. We do not believe in the amalgamation of the races, nor do we feel that it is favored by right thinking members of either race.

We do believe that all Americans, whether black or white, have a right to the full privileges of first class citizenship. To suggest that a recognition of the rights of Negroes to the full privileges of American citizenship, and to such necessary contacts as might follow would inevitably result in intermarriage is to cast as serious and unjustified an aspersion upon the white race as upon the Negro race.

Believing as we do in the desirability of preserving the integrity of both races through the free choice of both, we would emphasize the following principles which we hold to be of basic importance for our thought and conduct:

1. FREEDOM of speech must at all costs be preserved. "Truth is mighty and will prevail." No minister, editor, teacher, state employee, business man or other citizen should be penalized for expressing himself freely, so long as he does so with regard to the rights of others. Any position which cannot stand upon its own merits and which can only be maintained by silencing all who hold contrary convictions, is a position which can not permanently endure.

2. AS AMERICANS and as Christians we have an obligation to obey the law. This does not mean that all loyal citizens need approve the 1954 decision of the Supreme Court with reference to segregation in the public schools. Those who feel that this decision was in error have every right to work for an alteration in the decree, either through a further change in the Supreme Court's interpretation of the law, or through an amendment to the Constitution of the United States. It does mean that we have no right to defy the constituted authority in the government of our nation. Assuredly also it means that resorts to violence and to economic reprisals as a means to avoid the granting of legal rights to other citizens are never justified.

3. THE PUBLIC school system must not be destroyed. It is an institution essential to the preservation and development of our democracy. To sacrifice that system in order to avoid obedience to the decree of the Supreme Court would be to inflict tremendous loss upon multitudes of children, whose whole lives would be impoverished as a result of such action. It would also mean the economic, intellectual and cultural impoverishment of our section, and would be a blow to the welfare of our nation as a whole.

4. HATRED and scorn for those of another race, or for those who hold a position different from our own, can never be justified. It is only as we approach our problems in a spirit of mutual respect of charity, and of good will that we can hope to understand one another, and to find the way to a cooperative solution of our problems. God is no respector of persons. Every human personality is precious in His sight. No policy which seeks to keep any man from developing fully every capacity of body, mind and of spirit can be justified in light of Scripture. This is the message of the Hebrew prophets as it is of Christ and His disciples. We shall solve our difficulties when we learn to walk in obedience to the Golden Rule: "Therefore, all things, whatsoever you would that men should do to you, do ye even so to them for this is the law and the prophets."

5. COMMUNICATION between responsible leaders of the races must be maintained. One of the tragedies of our present situation is found in the fact that there is so little real discussion of the issues except within the separate racial groups. Under such circumstances it is inevitable that misunderstandings will continue and that suspicion and distrust will be encouraged. One of the reasons that extreme measures have been so often proposed or adopted by groups within both races is found in the fact that those who are most concerned have seldom faced the issues in a free exchange of ideas. We believe that a willingness of the part of white leaders to talk with leaders of the Negro race, and to understand what those leaders are really seeking for their people is necessary and desirable. An expressed willingness on our part to recognize their needs, and to see that they are granted their full rights as American citizens, might lead to a cooperative approach to the problem which would provide equal rights and yet maintain the integrity of both races upon a basis of mutual esteem and of free choice rather than of force.

6. OUR DIFFICULTIES cannot be solved in our own strength or in human wisdom. It is appropriate, therefore, that we approach our task in a spirit of humility, of penitence, and of prayer. It is necessary that we pray earnestly and consistently that God will give us wisdom to understand His will: that He will grant us the courage and faith to follow the guidance of His spirit.

To such prayer and obedience we would dedicate ourselves and summon all men of good will.

These are the Atlanta ministers signing the declaration of beliefs on the racial problems in alphabetical order:

The Regional Council of Churches of Atlanta
About Bishop Bevel Jones