Accessibility links
'Real Life' Rarity: A Romantic Comedy for Grownups Dan in Real Life is a rare romantic comedy aimed at adults. The Dan of the title is a newspaper advice columnist stumped by his own life. He's mourning the death of his wife and raising three rambunctious daughters who are growing up faster than he'd like.

Dan in Real Life is a rare romantic comedy aimed at adults. The Dan of the title is a newspaper advice columnist stumped by his own life. He's mourning the death of his wife and raising three rambunctious daughters who are growing up faster than he'd like.

We have a review this morning from Los Angeles Times and MORNING EDITION film critic Kenneth Turan.

KENNETH TURAN: "Dan in Real Life" is the rarest kind of film. It's a sophisticated, star-driven romantic comedy aimed at adults. The Dan of the title is a newspaper advice columnist stumped by his own life. He's mourning the death of his wife and raising three rambunctious daughters who are growing up faster than he'd like.

Mr. STEVE CARELL (Actor): (As Dan Burns) Well, Marty, what else can I do for you?

Mr. FELIPE DIEPPA (Actor): (As Marty Barasco) I'd like to see your daughter, sir, if I could.

Mr. CARELL: (As Dan) Nice to meet you, Marty. Come back in two years.

TURAN: Then at a bookstore, Dan, played by Carell, meets Marie, played by Binoche, and a queer and immediate attraction takes place. Imagine Dan's shock then when he goes to a big family reunion and is introduced to Marie as his brother's new serious girlfriend.

This is a classic screwball comedy predicament. Dan and Marie have to make believe they're strangers when they might be falling in love. In this misery-loves-comedy predicament, Dan even follows Marie into the bathroom to tell her how uncomfortable he is.

Mr. CARELL: (As Dan Burns) I'm not enjoying myself and I think that as two people with principle, that we should have some ground rules, don't you?

Ms. BINOCHE: (As Marie) What are you talking about?

Mr. CARELL: (As Dan) The salsa dance. This - this thing. If you could just not do that.

TURAN: Many of the good things in "Dan" came from director Peter Hedges, who wrote the novel and screenplay for "What's Eating Gilbert Grape?" Hedges specializes in reality-based comedy with a hidden heart. He doesn't take shortcuts with people and he doesn't let humor interfere with emotional complexity.

Carell, one of today's hottest comedy actors, handles the transition to romantic lead with grace. Though Binoche is usually found in more ethereal roles, like "The English Patient," she successfully made herself into an everyday version of the woman of every man's dreams.

Both Carell and Binoche were determined that there being nothing cute about the situation, and there is not. What we get instead is what Marie is looking for in that bookstore - something human and funny that could sneak up and surprise you, which is just what "Dan in Real Life" beautifully does. 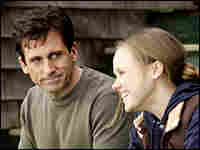 By the end of The 40 Year Old Virgin, the title character had lost his virginity — and actor Steve Carell had become a star.

The actor, who was a correspondent on Comedy Central's The Daily Show for several years, has gone on to films including Little Miss Sunshine and Evan Almighty, and next summer he'll star as hapless secret agent Maxwell Smart in a Hollywood adaptation of the vintage TV series Get Smart. And of course he's got a central role on NBC's The Office.

Now Carell is starring in Dan in Real Life, a big-screen comedy about a newspaper columnist who dispenses advice about parenting — never mind his own problems on the home front. Among other things, he falls in love with a woman without realizing that she's his brother's girlfriend.