Accessibility links
In New England, Concern Grows for Sugar Maple The sugar maple is a majestic tree with an important role in American history. Climate change may be threatening the tree and could jeopardize its sap production. 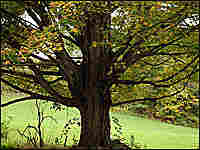 The furrowed trunk and wide reach of an old majestic sugar maple in Vermont. Some have expressed concern that a warming climate could impact the future number of these trees in New England. Ketzel Levine, NPR hide caption 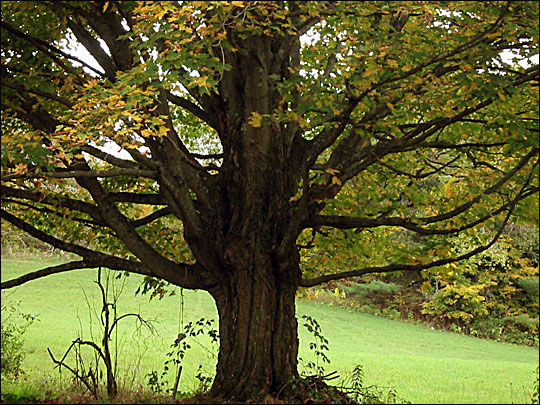 The furrowed trunk and wide reach of an old majestic sugar maple in Vermont. Some have expressed concern that a warming climate could impact the future number of these trees in New England.

More on Maple and Climate 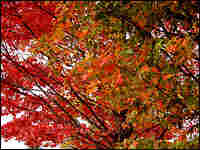 A sample from the fall palette of maple trees. While sugar maple colors range from yellow to peachy pink and all hues in between, the hot red seen here belongs to a red maple. Ketzel Levine, NPR hide caption 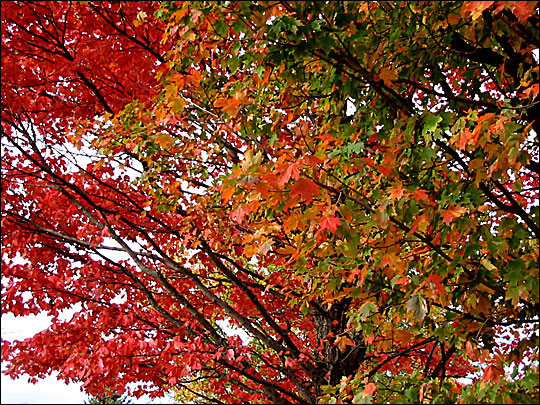 A sample from the fall palette of maple trees. While sugar maple colors range from yellow to peachy pink and all hues in between, the hot red seen here belongs to a red maple. 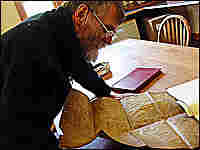 Charlie Cogbill reads the original lotting map for the town of Calais, Vt. The real find here is the description of tree species written in the corner of each 18th century lot. Ketzel Levine, NPR hide caption 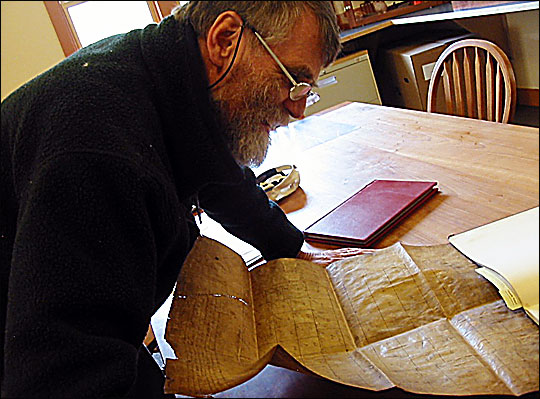 Charlie Cogbill reads the original lotting map for the town of Calais, Vt. The real find here is the description of tree species written in the corner of each 18th century lot.

Consider the color of fall leaves on a sugar maple tree: peach, orange, lemon, mango. It's an autumn delicacy, a thunderhead of foliage.

The species is also quite long-lived. In the Carlsons' forest in Sandwich, N.H., a few date from the 1700s. Martha Carlson has a number of favorite trees, with stories to tell about each one.

"I was tapping the trees right beside my house, and it was early in the season," Carlson says. "It was 34 degrees, and the sap was just pouring out. Then a cloud went over and the sap stopped. You could almost hear the tree click off."

An exquisitely sensitive tree, shuddering at the slightest chill, the sugar maple has a wide variety of residents, ecologists and scientists worried about how it will fare should Northeast temperatures rise as projected during the next century of climate change.

As he looks out over the hills of Northeastern Vermont, historical ecologist Charlie Cogbill takes his cues about sugar maples from their past.

"They were actually more abundant during the inter-glacial period 4,000 years ago," Cogbill says. "But they've been here for 8,000 years."

Cogbill's current focus is the pre-settlement forest, the way the landscape looked before white settlers shoed a horse or churned a tub of butter. Studying the lotting map of the town of Calais, Vt. — the original 1763 animal-skin parchment — he lists the big trees growing at the corner of the lots.

"We've got maple, spruce, beech, ash, hemlock. All the trees that were growing in 1763 are still growing outside in this landscape," Cogbill says.

Beech trees once dominated Calais, but by the late 1800s sugar maples ruled throughout the region. The reason was not natural selection, but human predilection. Early Americans were crazy for this tree.

And why not? It was a ready-made foliage festival, the promise of winter syrup on snow and, possibly, the most beautiful and durable wood in the forest.

Growing Concern for the Maple

In central New Hampshire, a pair of sugar maple trees frames the doorway to a historic house. The trees were likely planted by the family that originally built the house around 1790.

"They're wonderful gnarled trees," says lumberman Jamey French, whose parents live here in central New Hampshire. "They're in the latter stages of their life, all cabled now."

The French family is enormously beholden to the sugar maple for the butcher blocks, bowling lanes and squash and basketball courts its wood has been prized for. It is wood that has been harvested and sold by four generations of this hardwood lumber family.

At heart a steward of the forest, French has been watching many tree species for signs of decline, particularly the sugar maple. It's a touchy species living in a landscape of tangible, environmental change.

"I've seen multiple species of birds wintering over that were not common in my childhood: mocking birds and cardinals and titmice," French says. "Look along the sides of roads, and between the salt, acid rain, potential heat and drought cycles, you see trees stressed and dying. Boy, this is happening right in front of our eyes."

A few hours away, Carlson looks through a hand lens at ugly blotches on a maple leaf caused by a spreading black fungus. The likely culprit: a wet spring. She's also studying sap-to-syrup ratios in her graduate degree research at the University of New Hampshire. She wants to know whether sap is getting more watery and, if so, whether the reason is climatic stress.

Her family's own maple-rich forest looks healthy enough, some black fungus notwithstanding, but it's what she doesn't know that has her worried about her trees.

"If climate warming is going to hurt them, we need to study them not so much as a resource, but as a patient," Carlson says. "If there is something I can do, whether pruning them different or giving them more shade, I'd like to know that."

"Over the last 20 years, we've had more than our share of bad seasons," Morse says. "It isn't cold enough."

Morse says that no farmers are more dependent on the weather than sugar makers, many of whom say global warming is bunk. Not Morse, who says he and his fellow farmers began adapting to climate change the day they switched to vacuum pumps.

"Some sugars makers might say, 'No, the reason we went to vacuum is so we can get more sap,'" Morse says. "If they'd be really honest about it, they'd say more sap, or the same amount we used to get when we had the perfect weather."

Perfect days have been plentiful in New England this fall. Rotund clouds, pastel skies and sugar maples across the horizon. As temperatures rise, these luminous trees may slowly cease to dominate. But they will not turn off their taps, pack up their trunks and leave us sad as mud.

Spruce and fir may be at much greater risk; hemlocks are battling ravenous pests right now. Development, disturbance and human hands seem a greater threat than temperature.

Today, some 78 percent of Vermont is wooded — as much as 84 percent of New Hampshire. The odds, for lumberman French, still favor the forest.

"Fifty or 100 years from now, maybe hard maple won't be the most valuable species," he says. "But maybe the red oak in this area is back. Or maybe the white oak will recover. There was more white oak in our ancestors' time, but they cut it all down for boats and barrels. Who knows what it'll be. But I think our forests will survive."