Accessibility links
Scientists Study the Impact of Water on Climate Water is the most important greenhouse gas. NASA scientists study the moist air over Costa Rica to learn more about the role of water in climate change.

Listen
Scientists Study the Impact of Water on Climate 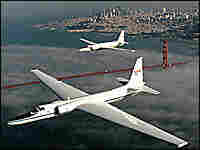 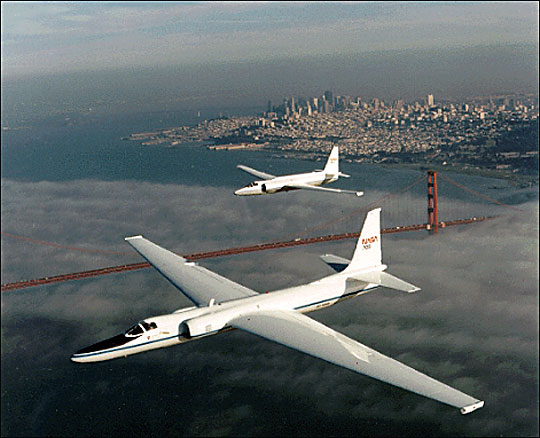 Two ER-2 planes fly over San Francisco. Planes like these record atmospheric data as the fly.

By the end of this century, the earth could warm up by two degrees — or 10 degrees. Sea level could rise a few inches — or a few feet. Scientists aren't sure because nothing to do with climate change is simple.

Take greenhouse gases, for example, which trap heat from the sun. The most important greenhouse gas isn't carbon dioxide or methane. It's water. And scientists are still trying to understand what role water has in global warming.

This summer, NASA sent a team to Costa Rica in search of more on information on the topic. One of their most important research tools was a sleek white jet that looks like a U-2 spy plane. Actually, it's a civilian version of the U-2, called the ER-2 — and it's is set up for science.

During one flight, the ER-2 spent the morning gathering information about the atmosphere 10 miles over head. But it wasn't a perfect flight.

"And it was not long after takeoff that it failed," Newman says.

But it's a minor setback. The day before, lightning punched a small hole in another NASA plane.

Clouds Crucial to Life and Research

It's all part of working in this area of the tropics, which may be the best place on earth to learn more about the role of water in global warming.

"Water is a tremendous greenhouse gas. It can condense and form all these clouds. Clouds can reflect radiation. Clouds can actually insulate the surface, if you got a cloud layer overhead the surface stays a little bit warmer. So water is really crucial to the whole process," Newman says.

To appreciate the importance of water in the atmosphere you have to imagine what the earth would be like without it.

"If we didn't have an atmosphere with water in it, the earth's average temperature would be about 30 degrees Fahrenheit below freezing," says Brian Toon, of the University of Colorado and a member of the Costa Rica team.

Water in the atmosphere is absolutely necessary. Unfortunately, water amplifies the effects of other greenhouse gases.

"You add carbon dioxide to the air, you burn a fire, drive a car, something like that, and that carbon dioxide floats up to the upper atmosphere and blocks some of the light from escaping to space, so the earth warms up a little bit," Toon says.

That causes water in the atmosphere to radiate more energy. So the oceans get warmer.

"And when you make water warmer, as everybody knows in their kitchen, more water evaporates and so the atmosphere gets more water in it. And that warms things up even more. So, the net effect of all this is is that if you just put in the carbon dioxide you get a temperature change, but all that water gives you three times more temperature change than you get with the carbon dioxide alone," Toon says.

Most water doesn't linger in the atmosphere. It falls back to earth within a week or so.

What's not clear is whether that extra water is the result of human activities and whether it's accelerating global warming.

NASA picked Costa Rica to study these questions because it's one of the places where large amounts of water can actually reach the stratosphere. The reason is massive thunderheads during the rainy season.

"In fact, some of these clouds do poke up to very high altitudes, 60,000 feet. And you get cirrus particles, small ice particles, the very feathery kind of clouds you see, they will come off of these thunderstorms," Newman says.

And they transport water into a part of the atmosphere that is normally very dry.

A flight took the ER-2 into high-altitude clouds that were discovered only a few years ago. They're cirrus clouds so thin they're invisible from the ground.

"We actually flew along with the airplane and we had a laser that shoots out the bottom of the plane and you could tell that this sub-visible cirrus was there, so we actually measure it with the laser," Newman says.

Scientists hope the infra-red measurements will show whether these clouds are contributing to the greenhouse effect by reflecting heat back to earth. That won't make climate predictions perfect. But it will make them better.