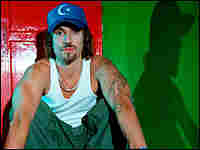 On the inside cover of his new CD, Dani Carbonell waxes epigrammatic. He quotes the Polish poet Stanislaw Jerzy Lec: Translated, it reads, "Learn languages. Even the nonexistent ones."

The Barcelona-based Carbonell, also known as El Mono Loco (The Crazy Monkey), is the lead singer and songwriter behind the Spanish pop outfit Macaco. And on the band's new Ingravitto, he sings in French, English, Portuguese, Spanish and Italian.

Such easy fusion of international references and funky rhythms has propelled Macaco to the top of the European charts for years. On the eve of the band's first U.S. tour, Carbonell discusses his genre-crossing music — in English.

Carbonell is a globally minded artist, but his musical ideas are rooted in the local community of Barcelona and the Catalan-speaking regions of Spain. He says he derives his rhythmic roots from the rumba catalana — "the groovy part of flamenco," he says.

Slow down the guitar riffs, though, and Carbonell says it begins to sound something like reggae. "People say that the way I sing is a mix of the reggae and rumba catalana — but it is something natural," Carbonell says. "I don't know why and how I started doing that."

For Carbonell, fusion comes organically. His father spoke Catalan and his mother spoke Spanish, his name is of Gypsy origin, and he has spent many years in the internationally minded port city of Barcelona.

The Barcelona scene, he says, fueled his hybrid musical concept. Ten years ago, Carbonell was squatting in a house in a run-down, international, artist-friendly neighborhood near the city port. He decided to start performing on the street, powering amplifiers with car batteries and experimenting with the musical ideas he heard around him.

"That's why I say always 'fusion without confusion,' because it's not a fórmula quimica [chemical formula]; it's not mathematic," Carbonell says. "It comes from the heart and the feeling."

"I compare mother earth, like, when if I say something bad about your mom or your family, very fast, you will be like 'Hey? What are you talking about?' in defense," he says. "I compare that feeling with 'Mama Tierra' — it's something very big that is under our feet, but it's alive, no?"