Accessibility links
Foolproof Test for Catching Liars Still Elusive Despite decades of trying, scientists still haven't developed the perfect lie-detector test. Critics complain of many problems with the current polygraph test, including that it seems to measure anxiety more than honesty. 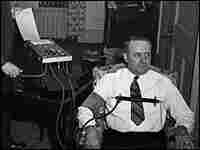 M.R. Allen, Treasury Secret Service agent in charge of Washington, serves as the subject of a demonstration of the Keeler polygraph before the United States Secret Service Men's convention in 1941. Bettmann/Corbis hide caption 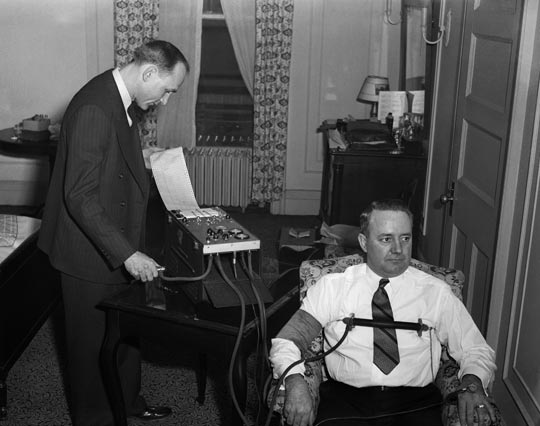 E.A. Wildy of the Treasury Secret Service gives a demonstration of the Keeler polygraph with M.R. Allen, secret service agent in charge of Washington, as his subject, before the United States Secret Service Men's convention in 1941.

What About in Court?

The polygraph test seems to turn up more frequently on low-brow daytime talk shows these days than in the courtroom. That's because a federal appeals court essentially ruled lie-detector tests inadmissible just a few years after the first one was invented.

Leonarde Keeler — the Berkeley, Calif., cop who patented the polygraph machine, made it portable and helped publicize its use — is often referred to as the father of the polygraph. But the first lie-detector test was actually introduced in the 1910s by William Marston, a Harvard psychologist (who also created the comic book character Wonder Woman).

Keeler's souped-up machine — which included more vital sign measures, such as heart rate and perspiration — went on to become the standard for polygraph testing. But it was Marston's method that led to the legal standard for allowing polygraphs — and indeed, all expert testimony on scientific findings — in court.

In the early 1920s, a man named James Frye was accused of murder in Washington, D.C., and said he would submit to a lie-detector test, administered by Marston, to prove his innocence. He passed the exam, but the court refused to allow it into evidence or to allow Marston to testify about it.

Frye was convicted. He appealed the decision in 1923, arguing that he should have been allowed to present Marston's testimony about the results of his lie-detector test as part of his defense.

The U.S. Court of Appeals for the District of Columbia supported the lower court's judgment, ruling that the polygraph test was not "sufficiently established to have gained general acceptance in the particular field in which it belongs." Frye v. United States set the standard that made polygraph tests generally inadmissible in criminal trials.

Although the Supreme Court set a new standard for allowing expert testimony in 1993, it still held in 1998 that blocking polygraph tests doesn't violate a defendant's constitutional rights, because "there is simply no consensus that polygraph evidence is reliable."

There is something disconcerting about the fact that we can map the human genome and land a robot on Mars, but we still can't say for sure whether someone is trying to pull the wool over our eyes.

Our inability to know when someone is deceiving us has enormous consequences in the fight against terrorism. The search for truth and information has led the Bush administration to seek legal justifications with regard to torture and interrogation. Just how far is America willing to go to wring information from a potential terrorist? The question ended up casting a pall over the tenure of former Attorney General Alberto Gonzales and became the seminal question in the confirmation hearings of his potential replacement, Michael Mukasey.

What we consider to be the modern polygraph, the machine that set the early standard for lie detectors, was invented in the 1920s, at a time when Prohibition was in full swing and law enforcement officers had their hands full chasing bootleggers and cracking crime syndicates.

That machine was invented by a Berkeley, Calif., cop, Leonarde Keeler. His timing couldn't have been better. The Roaring '20s were a time when quacks were extolling the virtues of truth serum and people were exploring the unconscious mind. Spiritualism was all the rage in the United States. In that environment, the prospect of a machine that could separate liars from truth tellers was exciting.

Keeler's machine was more clinical than mystical. It measured pulse rate, blood pressure, respiration and what he called electro-dermal responses — a fancy name for sweaty palms. Subjects were told to answer yes-or-no questions while their physical responses were recorded by ink pens on paper. But that shows the problem with the polygraph — in essence, it is more of an anxiety detector than an instrument that measures lying.

Robert DeNiro's interrogation of his prospective son-in-law, Ben Stiller, in the movie Meet the Parents wasn't just funny: It contained more than a grain of truth about the polygraph, as with each succeeding question, Stiller's anxiety levels went off the charts.

"Did you fly in an airplane today?" DeNiro begins. Polygraphers call this a base question — something innocuous that allows them to get a baseline reading on their subject.

"Yes, I did," Stiller answers, peering over at the machine.

"No peeking," DeNiro snaps. "Did we eat pot roast for dinner tonight?"

Stiller's anxiety begins to show. The needles on the machine begin to jump.

Herein lies the rub. While the polygraph can show when someone gets anxious, it can't say definitively what is triggering their anxiety. Critics of the machine say it is as much about intimidation as it is about not telling the truth.

In 2003, the National Academy of Sciences decided to put the machine to the test. Its conclusion: When the polygraph was used to investigate a specific incident, it performed "well above chance though well below perfection." It was hardly a ringing endorsement. The problem, the NAS report said, was that while the physical manifestations often associated with lying could be measured by the polygraph, the very same problems — increased heart rate, skyrocketing blood pressure and sweaty palms — could happen in the absence of a lie as well.

"Many other psychological and physiological factors (such as anxiety about being tested) also affect those responses," the report said. "Such phenomena make polygraph testing intrinsically susceptible to producing erroneous results."

Clearly, the body gives off signs of deception, so good lie detection is really about trying to identify the best way of reading those signs.

Getting Hooked Up to the Polygraph

Bill Majeski looks nothing like the polygraphers you see in the movies. He is a soft-spoken man who exudes gentleness. A former New York Police Department investigator and polygrapher, Majeski agreed to hook me up to one of the old-fashioned Keeler polygraph machines, so I could experience it.

The machine looked a little menacing. About the size of a briefcase, it seemed a little like those EKG machines paramedics took out at the scene of an accident in the 1970s show Emergency. Majeski cracked open the polygraph to reveal a tangle of copper wires connected to metal knobs. He extracted a blood pressure cuff and some hoses — and even light chains.

I began to question the wisdom of getting myself hooked up to the polygraph. I have nothing to hide, exactly, but I still felt my heart begin to race.

"It is clearly intimidating to a certain extent, and that is one of the reasons why so much time is spent preliminarily," he said.

He said a good polygrapher can spend hours with a subject before actually firing up the machine.

"Clearly, you are measuring levels of anxiety and emotion," Majeski said. "But the thing is that you establish a norm for the person that you are going to be testing. ... I will never do a polygraph test if a person is in a high state of anxiety."

Majeski put a blood pressure cuff on my arm and tightened it. He put a coiled rubber tube that looked like a telephone cord around my chest. It felt tight. He placed monitors on my fingertips. Now, before you start hoping that Majeski did to me what DeNiro did to Stiller, he didn't.

The key point was that I had nothing at stake. For a polygraph to work, you have to actually care about what you are being asked. So all we heard while he asked me mock questions was the soothing, even scratching of the pens on the polygraph paper.

It may surprise you that the people who are the most effective at administering the tests are those who are rooting for the subjects.

"When I do a test, as with any good examiner when they do a test, they view the subject as being a truthful subject," Majeski said. "And you go forward with that premise. The natural reaction by a truthful person is they are a little nervous. They don't want to be blamed for something they didn't do. So they are looking for some helping hand and we should provide that."

Of course, that is a problem, too. The subjective opinions of polygraph examiners play a huge role in whether people pass or fail. Studies show, for example, that senior staff members at organizations rarely fail the test. Yet as many as 40 percent of applicants for entry-level positions don't pass. Are applicants just more nervous? Or is it that polygraphers don't want to fail their bosses?

Daniel Langleben, a psychiatrist and neuroscientist at the University of Pennsylvania, said it's unclear just how much the interaction between the polygraphers and their subjects affects the test. For him, that negates the polygraph's usefulness in lie detection.

"It is not very well understood, but face-to-face interaction between an examiner and an examinee is a factor," he said. "To me, an unknown is equal to [a] problem."

Search for a Perfect Test Goes On

Dig a little deeper and you find a lot of problems with the polygraph. Despite many tests, the polygraph didn't catch Aldrich Ames, the CIA agent who spied for the Soviets. Consider the case of Wen Ho Lee, the Department of Energy scientist who was wrongly accused of being an agent for the Chinese government. The polygraph he took indicated deception but there was never any proof that he passed nuclear secrets to the Chinese.

"There is just no question in my mind that if we had an effective lie detector that the pressure to use it for security purposes, in courtrooms — even in sensitive employment settings — will be so strong that it will make its way into those settings," said Paul Root Wolpe from the Center for Bioethics at University of Pennsylvania. "The reason polygraphy hasn't done that yet is because it is just not good enough."

So the challenge to find the perfect detector of deception continues. There are new machines that look for brain-activity patterns when a subject is lying, and computers that track micro-expressions that can tip someone off to untruths. As the war on terrorism continues, the search for a way to ferret out lies does, too. So far, it has been elusive.