Accessibility links
Bush, Critics Face Off on European Missile Shield President Bush says there's an "emerging threat" to the U.S. and Europe from Iran's alleged pursuit of nuclear weapons and ballistic missiles. Critics say there are a few things wrong with the president's proposal for missile defense. 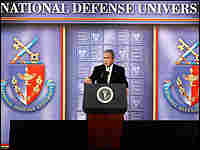 President Bush has described what he calls an "emerging threat" to the United States and Europe from Iran's alleged pursuit of nuclear weapons and ballistic missiles.

In a speech on Oct. 23, he said "the need for missile defense in Europe is real, and I believe it's urgent."

The president's proposed solution for Europe is a radar installation in the Czech Republic, and a site in Poland for launching missiles designed to shoot down attacking missiles before they reach their targets.

Critics say there are at least three things wrong with the president's proposal: they say Iran doesn't pose a significant missile threat; that the missile defense could touch off an arms race with Russia; and that the technology to shoot down enemy missiles can't do the job.

Here's a look at where various interested parties stand on these three issues:

President Bush says United States intelligence shows that "with continuing foreign assistance," Iran could develop intercontinental ballistic missiles capable of reaching the United States and Europe before 2015. Lt. Gen. Henry Obering, the head of the government's Missile Defense Agency, says Iran could be ready to hit shorter-range targets in Europe even sooner. The key here is "continuing foreign assistance." Bush is alluding to aid from North Korea, which is believed to have sold missile technology and parts to Iran in the past.

Hans Blix, the former chief weapons inspector for the United Nations, told the Canada AM television program that he thinks Bush is overreacting to an uncertain threat that would take more than seven years to unfold. Blix pointed out that the United States has now reached a nuclear agreement with North Korea and said the administration should consider a similar approach with Iran.

President Bush has argued that the missile defense system poses no threat to Russia, which sharply opposed the plan when it was first announced.

Gary Schmitt, of the American Enterprise Institute, says it's "ridiculous" to think the system would threaten Russia, which has hundreds of missiles that could strike the United States, yet cannot be hit by the European missile defense system.

"When you have nuclear subs that can fire missiles from under the Arctic ice cap," Schmitt says, "why worry about this installation in Europe?"

Obering says the United States has offered to collaborate with Russia, and that Russian officials have already been present at tests of missile defense system. Russia has long argued, though, that a country that believes itself to be shielded from enemy missiles is less fearful of retaliation and more likely to use offensive missiles of its own. Russian officials may not be afraid of the relatively few missiles that would be deployed in Poland, but they do fear that the radar detection system could be used to monitor them. Even so, Russian President Vladimir Putin has indicated he's willing to talk more about the issue, and has put forward some ideas of his own for collaboration.

Effectiveness of the Missile Defense System

Both sides have colorful analogies to show how hard it is to find and hit an incoming enemy missile. The Missile Defense Agency calls it akin to "hitting a bullet with another bullet," but then goes on to say that's "a capability that has been successfully demonstrated in test after test."

Philip Coyle, a senior advisor to the Center for Defense Information, says missile defense is "like trying to hit a hole-in-one in golf when the hole is going 17,000 miles an hour out in space."

Coyle, who was the Pentagon's chief weapons evaluator during the Clinton administration, says demonstrations of the system's success are far fewer than the Missile Defense Agency claims. For one thing, he says the agency isn't counting planned tests that were aborted in 2004 and 2005, even after the dummy target missile was in the air. In one case, it was because the target missile wasn't behaving as predicted, and the implication is that the system can't hit "enemy" missiles unless they follow a carefully pre-scripted scenario.

Coyle also says that the tests have been conducted against missiles that aren't protected by decoys and countermeasures that an attacker would be expected to use. He says the system could be blinded by clouds of metal fragments – say, paperclips – released along with the missile. "I think Iran knows how to do paperclips," Coyle says. He adds that the defenses could also be confused by decoys, such as balloons shaped like missile warheads.

Obering, the Missile Defense Agency director, disputes this concern, saying that the current system can overcome simple countermeasures, in part with X-band radars mounted on ships, that he says are "extremely powerful" in picking out the targets from debris and discriminating between warheads and decoys. He acknowledged that the agency is still trying to figure out how to defeat more sophisticated countermeasures.

Funding for the System

Critics such as Coyle point out that the European plan has little support in the Democratic-led Congress — but this doesn't necessarily mean it won't be built. Obering says his agency expects to get about $8.6 billion dollars this year. The only constraint on spending the money in Europe is getting approval from the host nations, and site preparation is already underway, he says.

It's unclear whether Poland and the Czech Republic will approve the projects. Poland's recent election changed the government there. The likely new prime minister, Donald Tusk, has said he'll take a tougher line on missile defense. The Czech government generally supports the radar site, but polls show most Czech citizens oppose it.