Accessibility links
Digging Into the History of the Humble Toothpick In The Toothpick, author Henry Petroski looks at the odd and sometimes secretive history of the three-inch stick of wood. Picking your teeth, he finds, is among mankind's oldest bad habits.

Listen
Digging Into the History of the Humble Toothpick 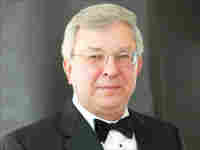 In his latest book, Henry Petroski, a professor of civil engineering and history at Duke University, explores the history of the humble, wooden toothpick. Catherine Petroski hide caption 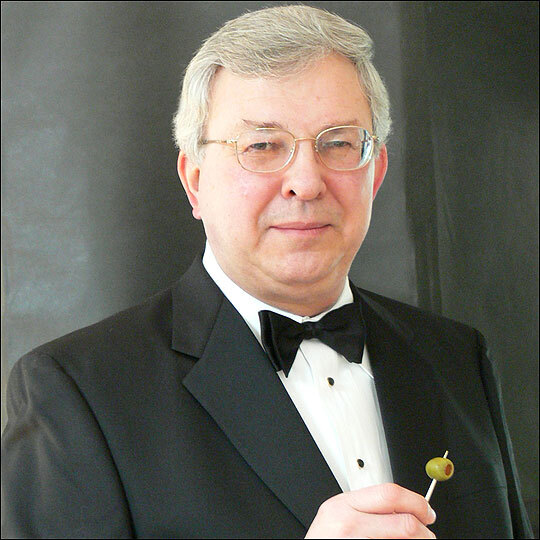 In his latest book, Henry Petroski, a professor of civil engineering and history at Duke University, explores the history of the humble, wooden toothpick. 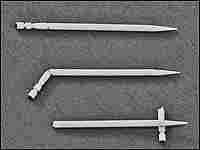 Traditional Japanese toothpicks are pointed at one end, and have grooves that allow it to be broken off to indicate that it has been used. Catherine Petroski hide caption 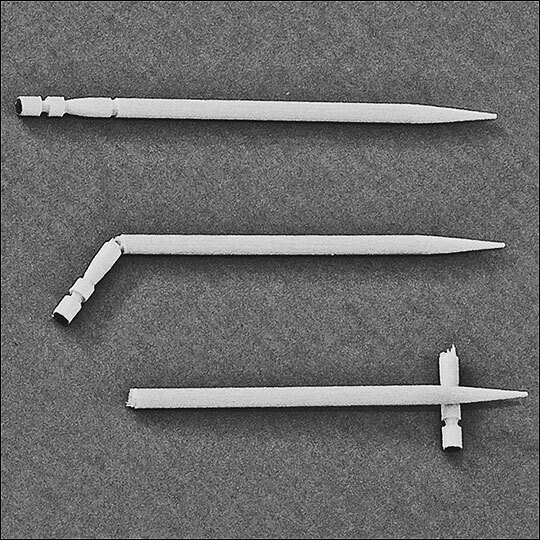 Traditional Japanese toothpicks are pointed at one end, and have grooves that allow it to be broken off to indicate that it has been used. 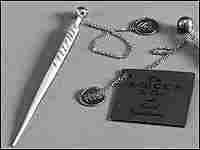 These Portuguese toothpicks, made for the tourist trade, have elaborately hand-carved shafts. Catherine Petroski hide caption 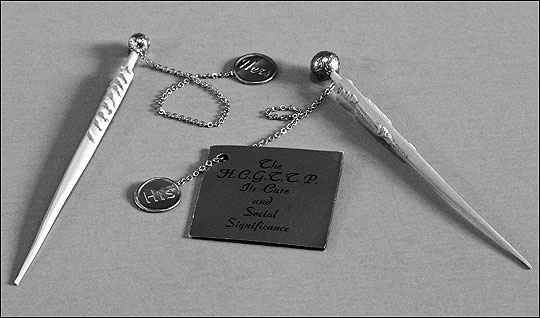 These Portuguese toothpicks, made for the tourist trade, have elaborately hand-carved shafts.

For author Henry Petroski, the simplest of instruments — be it a pencil or a telephone keypad — can offer fascinating stories of engineering, design and cultural history.

Even toothpicks don't escape his inquisitive eye. His latest book explores the history of this seemingly mundane tool — and why picking our teeth is among mankind's oldest bad habits.

In The Toothpick, Petroski, who is a professor of civil engineering and history at Duke University, chronicles the instrument's odd and funny history, taking readers back to the time of the Neanderthals. Anthropologists have found evidence of grooves on fossilized teeth that resulted from rough-hewn toothpicks. Later, in ancient Rome, the emperor Nero entered a banquet hall with a silver toothpick lodged in his mouth.

The American toothpick industry owes its success to Charles Forster, a 19th-century Bostonian who hired Harvard students to demand toothpicks in restaurants. He'd return to the restaurant the next day to sell his wares. He used the same tactic at retail stores, gradually making the toothpick a ubiquitous part of the culinary experience.

But the lowly implement has surprisingly secretive manufacturers, who guard their designs closely. In recent years, Petroski writes, Japanese visitors to a toothpick factory were denied entry to protect "tricks of the trade."

Petroski also finds that the toothpick has adapted across cultures. In Japan, traditional toothpicks are pointed at one end only. Decorative grooves at one end enable the end of the toothpick to be broken off to indicate that it has been used. The stub also provides a rest to keep the soiled part from touching the table. In Portugal and other countries, toothpicks are often hand-carved and receive elaborate ornamentation.

Andrea Seabrook spoke with Petroski about his fascination with this three-inch-long stick of wood. 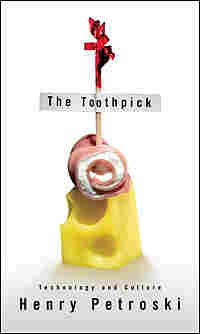 Chapter One: The Oldest Habit

Nothing can be more annoying than having a piece of food stuck between our teeth. As tiny as it might really be, in time it can seem to grow out of all proportion to its place in the mouth. As the pea under the princess's mattress prevented her from enjoying a night's sleep, so a tiny seed between molars can deny the diner much-anticipated postprandial peace and satisfaction. Like a grain of sand between two millstones, the foreign matter grates on us until it is worked free.

We have all devised our own preferred methods for dealing with the problem, but when we are not alone some of us may be constrained by social strictures to work within a closed mouth. Our tongue is often the instrument of choice, but the tongue's soft, blunt tip is usually ineffective. We have to flex and strain the muscles that harden and point it, and the process can be excruciatingly trying, tiring, and not really so private or inconspicuous as we might wish.

When wooden matches were commonly found near the kitchen stove, they were convenient to be split or whittled into toothpicks. One uninhibited character in a 1920s novel entered a shop "still helping the breadcrust out of his teeth . . . with his tongue," supplemented by a split matchstick, which was a sure giveaway of his plight. However, even without opening our mouth to use a pointed tool, whenever we proceed to drag the tongue across and thrust it between our teeth at a repast's tenacious residue, we reveal our mission by the bulge moving around our lips and cheeks like a mole beneath the lawn.

Sucking at the stuck debris can sometimes be effective, but not always easily for stubborn little things. It takes more than eight pages in James Joyce's A Portrait of the Artist as a Young Man, involving "sucking at a crevice in his teeth," among other efforts, for the character Cranly to dislodge fig seeds. We can also try squirting saliva between the teeth to flush out some unfriendly food debris. However, like vacuuming a rug or washing windows with a water hose, such actions can be noisy. The overzealous tooth sucker whose lips slip apart can sound like a wet kisser bussing the air, the too-eager spit squisher like someone squeezing a wet sponge.

The finger can be an effective lever to move what will not otherwise budge, but in many circles its use points to the defeat of other means. Besides, like the tongue, the finger is usually too blunt an instrument for the task at hand, and some people have been known to "grow a long finger nail especially for picking teeth." Sometimes, even an ordinary fingernail can be enlisted successfully, but implementing it as a solution can seldom be done with grace.

The most common alternative to natural and self-contained means is, of course, the familiar wooden toothpick. Where social strictures do not censure its use, the toothpick can be a most effective tool to succeed where tongue and fingers fail. As all tools are extensions of our bodies and their extremities, so the toothpick is an extension of the finger. It allows us to reach into the back of our mouth more easily and effectively, a need that has existed coevally with the need for food itself. Indeed, it has been suggested that "the ability to sense and remove food particles between teeth" dates from a couple million years ago, and that toothpicking represents "the earliest currently known nonlithic tool use by hominids." Hence, picking one's teeth is believed to be the oldest human habit.

The evidence comes from fossilized teeth, which have been called "the most durable relics of early life," certainly outlasting any toothpicks that may have been used on them. Unlike stone tools, implements made of grass, thorn, wood, or other vegetable materials would decay or erode over time, leaving no artifacts recognizable as toothpicks. However, for nearly a century, anthropologists around the world have noted curious striated grooves on fossilized teeth from a large number of diverse locations and covering a great span of time. As early as 1911, a French anthropologist described grooved teeth found at the La Quina Neanderthal site and proposed the hypothesis that it was the use of abrasive toothpicks that caused the grooves. Subsequently, similarly grooved teeth have been found among the remains of Australian Aborigines, North American Indians, Canary Islanders, and Upper Dynastic Egyptians, as well as other populations. The oldest examples of such grooving have been found in Africa. A tooth from the Olduvai Gorge archeological site in Tanzania "bears a series of tiny parallel lines scraped by a sharp, thin object pushed into the narrow space between teeth." An example from the Ethiopian site Omo has been estimated to be almost two million years old.

It has been speculated that the use of toothpicks may have commenced with meat eating among early hominids, and that "the intent of primitive man was by no means the artificial cleaning of his teeth but simply the removal of an unpleasant subjective sensation." Even today, after ages of evolution, our teeth are still "not well designed for eating meat," as those of us who are not vegetarians know all too well. It is stringy pieces of meat that can be the most difficult to remove from their lodging place. Still, that the grooves in fossilized teeth were due to toothpick use has been debated among anthropologists, some of whom did not believe that simply picking food particles from between the teeth, even over a lifetime of eating, could cause such distinct grooves, some of which are as much as two millimeters wide.

To produce such damage, it has been believed, there would have to be the prolonged working back and forth of a toothpick or toothpick-like device. One theory was that toothpicks were used not simply to remove bits of food but to serve the therapeutic and palliative function of easing the pain of periodontal disease and dental caries. Extended use might have worn away the decay and left a clean groove. Regular toothpick use may have caused the triangular opening bounded by neighboring teeth and gums to grow, thereby allowing more food to become impacted in the space, thus requiring further probing. Sensitive gums might have encouraged prolonged toothpick use, which might also have resulted in grooving. It has even been proposed that the practice "may have been a largely unnecessary, non-functional pastime that was cultural rather than practical." Whatever its cause or motivation, the grooving of teeth appears to have been ubiquitous.

Excerpted from The Toothpick by Henry Petroski Copyright © 2007 by Henry Petroski. Excerpted by permission of Knopf, a division of Random House, Inc. All rights reserved. No part of this excerpt may be reproduced or reprinted without permission in writing from the publisher. 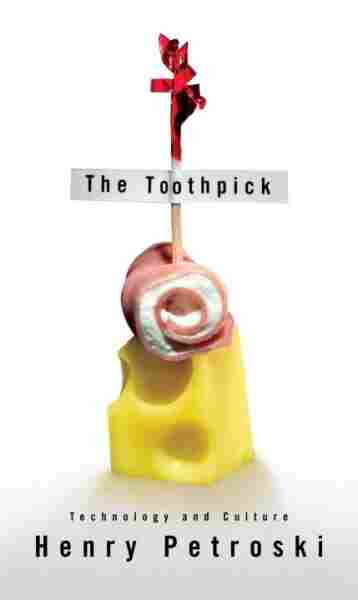