Accessibility links
Papers: Jesuits Were Warned About Abusive Priest Father Donald McGuire was convicted last year of sexually abusing two teenaged boys in the 1960s. Jesuit leaders insist they had no knowledge of any other abuses by McGuire, but documents reveal they were alerted by concerned parents many times over the past 38 years.

The archived audio and text for this story have been edited for privacy reasons. 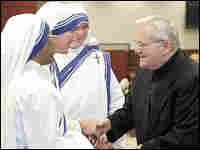 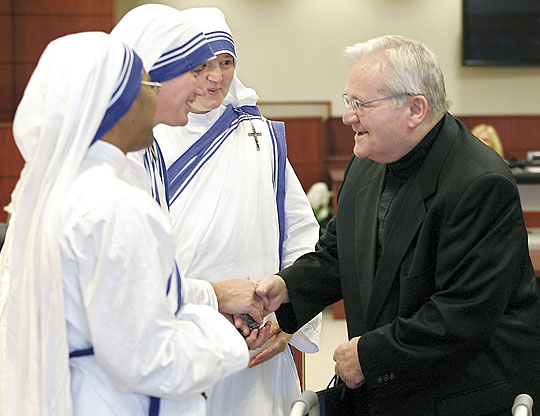 Father Donald McGuire, shown here with nuns from Mother Theresa's order, the Missionaries of Charity, was convicted in 2006 of sexually abusing two boys in the 1960s.

Documents in the Case

Lawyers for several of Father McGuire's alleged victims have obtained documents that show the Jesuits were repeatedly alerted to his alleged sexual abuse, beginning in 1969. Read some of those documents:

Oct. 25, 2000: Letter from parents of Alleged Victim 7 to Jesuits about McGuire showing their son pornography.

Father Donald McGuire sexually abused two teenaged boys in the 1960s. That much is public record: He was convicted in a criminal trial last year.

As recently as nine weeks ago, Jesuit leaders insisted that they had no knowledge of any other abuse by the renowned priest. But documents show that over the past 38 years, Jesuit leaders were alerted many times about McGuire's behavior — even as criminal and civil cases were under way. That raises the question: What happened to those records?

"They either destroyed documents relevant to criminal activity, or they lied," said Marc Pearlman, an attorney for several plaintiffs.

Pearlman has obtained copies of 25 documents from families of alleged victims, which he gave to NPR. They indicate that McGuire had sexual relationships with at least seven teenage boys between 1969 and 2004 (three others have since been identified). The documents include letters from family members to top Jesuit leaders, as well as letters from Jesuit leaders discussing the problem. Pearlman said because the Jesuits failed to act after the first report, a sexual predator had free access to young men for nearly 40 years.

Edward Schmidt, the provincial, or leader, of the Jesuits in Chicago, said they were not protecting McGuire.

"We were treating him as a member of the Jesuit order," he said in a phone interview. "We were proceeding as though he were a good person, you know, until we became aware of some of these issues that have now become public. Were we trying to protect him from authorities? Not in any way."

Until very recently, Donald McGuire was one of the most prominent Jesuits of his day. In 1983, he became the spiritual director of Mother Teresa's organization and her confessor. He led Ignatian retreats, calling people to an intimate relationship with God.

As he traveled the world, McGuire often brought a teenage boy with him as an intern, and devout Catholic families jumped at the privilege.

The first signs of trouble surfaced in 1969, in a case that would eventually result in McGuire's criminal conviction. A 14-year old freshman at Loyola Academy, a high school near Chicago, met Father McGuire when the young priest was assigned to be his counselor. McGuire soon persuaded the teenager and his father to let him board at the school. McGuire said the boy would sleep in a nearby room. But McGuire immediately moved the boy to his own room and "then the abuse turned physical," according to the victim, now 51 years old.

"There's only one bed inside the room, so sleeping quarters were to sleep in the same bed together," the man said in a phone interview.

As recently as 2005, the Jesuits said they had no knowledge of this. But documents suggest they did. The boy had told his parish priest about the abuse. The priest wrote the Jesuits running the school in November 1969, and Pearlman has a copy of that letter. The said the Jesuits told him they would take care of McGuire. They put McGuire on sabbatical, and he did not return to the school. But three years later, the then-teenager realized they had not done enough.

"I was walking down one of the lanes at Loyola University," he told NPR, "and ran smack dab into Father McGuire toting a little boy with him, in the ages of like 13 to 14 years old."

Documents show that McGuire had a pattern: He would persuade a family to let their teenage son intern with him, and quickly move the boy into his room. And then, according an alleged victim who asked that his name not be used, McGuire would give the boy a sexual education, using the sacred rite of confession.

"We underwent something called a 'general confession,' whereby you just lay out your sins," the alleged victim, a young man, told NPR. "And the priest will help you, talk you through it, maybe give you some guidelines for the future. And his guidelines were to teach me about sex."

He says the guidelines included naked showers, massage and pornography. Between 1999 and 2002, the young man says he traveled with McGuire every summer, Easter and Christmas, and lived with him at Canisius House, a residence with other Jesuit priests. He said he cannot understand how they did not catch on that a teenager was living with a priest.

"How could they not know? I was in his room almost all the time," the young man said. "The food was being brought in. His secretary would drop me off. How could you not know?"

Father Edward Schmidt, the provincial since 2003, says it's an excellent question.

"I can see why the public would wonder about that," he says. "But Donald McGuire just had his own way of doing things. He could sneak people around late at night. It does seem very difficult, but I can believe that no other Jesuit knew about it. Other Jesuits would have been outraged if they had known that. If anybody had seen that going on, known that was going on, he would have been denounced immediately."

In the summer of 2003, the man who was abused in the 1960s and Vic Bender, another man who was abused by the young priest around the same time, sued McGuire and the Jesuits. That suit led to a criminal case against the priest — not in Illinois, where the statute of limitations has run out, but in Wisconsin, where McGuire had taken the two teenagers, separately, on weekend trips. The district attorney there told NPR that he could not subpoena documents across state lines. He asked the Jesuits if they had records that would indicate McGuire had abused any boys since the late 1960s. He said, "I naively relied on their goodness."

The Jesuits said they had nothing.

"The statement by the Jesuits by the DA in Wisconsin — there's no other way to characterize it but a bald-faced lie," says attorney Marc Pearlman. "We now have the documents that show they had a great deal of material."

Pearlman said that one family wrote to Jesuit leaders in October 2000, asking them to investigate concerns they had about their son being forced to sleep on the same bed with the McGuire.

"And the Jesuits wrote back to them that, initially, 'We're looking into it,'" Pearlman said. "But pretty much for the next three years, [the Jesuits] told them that how they're investigating and what they're doing is none of their business," Pearlman said.

Or, as the Jesuit handling the case wrote, "We would hope that you would trust us to act appropriately."

Letters go back and forth until 2003, when the first civil lawsuit was filed. Eventually, McGuire was convicted of sexual assault. He has been sentenced to seven years in prison and is out pending appeal.

"As I look back, in hindsight, there are lots of things we should have done differently," he says. "The fact of the matter is, we're dealing with someone who does his own thing. We had directives in place. We could have been stronger in managing him, but we were not. I wish we had been."

What about those documents, and Pearlman's allegations that the Jesuits lied or destroyed them? Schmidt says it's a mystery. The Jesuits recently hired a former FBI agent, Kathleen McChesney, to scour McGuire's files. The agent told NPR she has already found allegations going back to 1993.

As for McGuire, he remains a priest but cannot perform priestly duties. On Thursday, a Wisconsin judge will hear his motion for a new criminal trial. In a brief phone conversation, McGuire said he's "very hopeful" about the outcome.

1961: McGuire is ordained as a Jesuit priest.

Nov. 29, 1969: Father Charles Schlax, a Chicago Archdiocese priest and the pastor at Our Lady of Lourdes, writes to Father John Reinke, S.J., the president of Loyola Academy, to confirm their telephone conversation about the sexual abuse of Victim 4 (relayed to Father Schlax by Victim 4 earlier that day). The letter says that Victim 4 said McGuire is a "pervert."

1986: Victim 9 is born. McGuire baptizes him and becomes his godfather.

July 1993 – Jan. 1994: Several letters are exchanged between the father of Victim 6 and the Jesuits regarding what the father feels is McGuire's inappropriate contact with the teenager.

Summer 1999: Victim 9 goes to Chicago to "live" with McGuire at Canisius House. McGuire allegedly uses confessions as a means to begin fondling Victim 9, who alleges that McGuire sexually molested him hundreds of times between 1999 and 2004, including regular abuse during confession.

Oct. 25, 2000: The parents of Victim 7 (McGuire's assistant from June 1998 to August 1999) write the Jesuits (Father McGurn), alleging that McGuire had shown pornography to their child and saying their son's emotional state "alarmed" them.

Oct. 27, 2000: The parents of Victim 8 (another assistant to McGuire) write a detailed letter to McGurn following a September 2000 phone conversation outlining their concerns about McGuire's relationship with their son. They report that McGuire made their teenage son sleep in the same bed with him in 1999-2000.

Jan 10, 2001: McGurn writes back to the parents of Victim 8, refusing to share any details about how the allegations would be handled. "We hope you would trust us [Jesuits] to act appropriately." There is no record of the Jesuits doing anything to restrict McGuire at or around that time. In fact, at that time, Victim 9 continued to live with McGuire when he was not at school; he was allegedly sexually abused almost daily when he was with McGuire.

November 2001: Victim 10 accompanies McGuire, who is directing an Ignatian retreat, to assist and serve McGuire. Victim 10 sleeps in McGuire's room.

Dec. 7, 2002: The parents of Victim 8 contact the Archdiocese of Chicago. They tell the Cardinal's delegate that they are frustrated that their complaint to the Jesuits has not been resolved and that McGuire is still working in ministry.

Aug. 17, 2003: Victim 4 sues the Jesuits over his alleged sexual abuse. McGuire tells the father of Victims 5 and 10 that the plaintiff is just after money and will be made "to look foolish."

Sept. 25, 2003: Vic Bender (Victim 2) files suit against McGuire and the Jesuits for alleged abuse while he was a student at Loyola Academy.

Oct. 1, 2003: Father Edward Schmidt calls the parents of Victim 8, who had first complained three years ago, advising them that McGuire's faculties had been removed. He suggests that the action is the result of the parents' reports. However, by that time, two civil lawsuits had been filed against the Jesuits and McGuire — by Bender and Victim 4 — and a criminal investigation was under way.

Summer 2004: McGuire allegedly sexually abuses Victim 9 for the last time, after the order told the parents of Victim 8 that McGuire had been disciplined.

Feb. 8, 2005: McGuire is arrested in Wisconsin and charged with sexually abusing Victim 4 and Bender.

February 2006: McGuire is convicted of five counts of sexual assault of a minor in Wisconsin. He remains free, pending appeal. He appears in court — and in his sex-offender registry photo-- in his Roman Catholic collar.

September 2007: McGuire continues to wear a Roman Catholic collar and "act" like a priest in public. Father Edward Schmidt, S.J., provincial of the Jesuits, says he cannot prevent McGuire from wearing the collar.

-- Based on a timeline released by plaintiffs' attorney Marc Pearlman.