Accessibility links
Tokyo Auto Show a Technological Wonder The Tokyo Auto show is the premiere showcase for new automotive technology in the world. Sales of Japanese cars are reaching a 20-year low, and companies are looking to capture more of the market. On display are cars with electronic and windows on the floor for a view of the road.

The Tokyo Auto show is the premiere showcase for new automotive technology in the world. But sales of Japanese cars are reaching a 20-year low. Companies are looking for cars that will capture more of the market and snag younger buyers. On display are cars with electronic and windows on the floor for a view of the road. 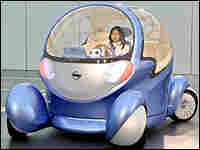 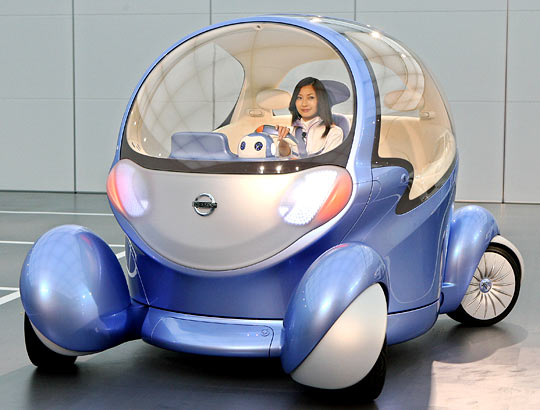 The small robot inside the cabin of Nissan's Pivo 2 concept vehicle makes for a "very intimate relationship between driver and car," chief designer Masato Inoue says. 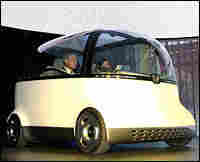 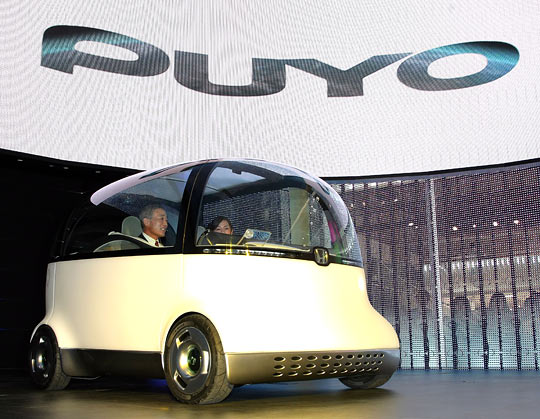 As automakers gather for the 40th Tokyo Motor Show, U.S. companies are struggling and Japanese car makers are in the driver's seat. One big debate among the Japanese companies is what kind of eco-friendly technology to use.

You'd think Japan's nine automakers would be on top of the world. Their market share is rising in the United States and Toyota has more or less stolen GM's crown as No. 1. Profits are hefty and the companies are flush with cash.

And yet, these are the worst of times as well as the best for Japan's car companies. Their home turf is the world's second-biggest car market, but sales are sagging there.

Toyota spokesman Tomomi Imai says the company is unlikely to meet its sales forecast this year.

"We still try to achieve, but the latest forecast does not meet our target," he says. "In comparison to 10 years ago, [the] Japanese market unfortunately is not as good as we hoped."

Japan is in the throes of a demographic double-whammy. It's graying faster than any other country and women are having fewer babies. A shrinking population means fewer car buyers.

The bright spot in Japan's domestic auto industry these days is a kind of car no one's heard of in the U.S. It's the ultracompact, known in Japan as the "kei" car.

Kei (pronounced K) cars used to be the Yugos of the auto world — cheap price and low quality. They're still bargains, but now that overall sales are tanking, fierce competition has forced carmakers to boost quality.

You would be unlikely to confuse Mitsubishi Motors's latest kei car with a Mercedes or a Lexus, but it does have plush seats and a roomy interior.

"It accelerates quickly and handles well," says Kenichiro Wada, a Mitsubishi project manager. "So instead of a car you have to suffer with, it's actually pleasant to drive."

Kei cars are so hot these days, they account for about one out of every three cars sold in Japan. But they're not very profitable.

Yet Japanese automakers are still powerhouses in automating and electronics. Market leaders Nissan, Toyota and Honda use the auto show to reveal their wackiest concept cars.

Honda's Puyo car looks a little like a marshmallow on wheels. Its skin and interior aren't made of the standard steel and upholstery, but rather squishy silicon — the same material that goes into breast implants.

"Young people are turned off by cars these days," says Takuya Okita, a designer for Honda. "They associate cars with pollution, accidents and drunk drivers. So they need a car that is unique or that makes them smile."

It's not just Honda. Japan's other automakers seem to have fallen victim to an epidemic of cuteness.

Nissan's Pivo would be right at home in Roger Rabbit's Toontown. A life-sized robot head swivels playfully on the dashboard, chatting up and calming down stressed out drivers, according to chief designer Masato Inoue.

The small robot inside the cabin makes for a "very intimate relationship between driver and car," he says.

Pivo is totally electric. But it's just one of many eco-friendly technologies Nissan and other carmakers here are testing.

"The problem is nobody knows who's right and who's wrong," says auto analyst Christopher Richter. "The carmakers themselves don't know who's right and wrong, and so makers are looking at all options."