Accessibility links
Mount Tambora Eruption Hardly Known Indonesia is home to the world's largest-ever volcanic eruption — Mount Tambora in 1815, killing 100,000 people. But the disaster is little remembered, primarily because of lack of media.

Indonesia is home to the world's largest-ever volcanic eruption — Mount Tambora in 1815, killing 100,000 people. But the disaster is little remembered, primarily because of lack of media.

Indonesia was struck by massive earthquake and volcanic eruption this past week. The citizens took it in stride. They're used to such events. But there are a few facts about volcanoes that even Indonesians don't know.

MICHAEL SULLIVAN: Indonesia has more active volcanoes than any place in the world. And I've been getting to know a few of them over the last couple of years. I've climbed on Krakatau in the Sunda Strait, the fast-growing son of the volcano that blew with a bang in the 1883.

Last year, I watched Indonesian officials evacuate thousands from the slopes of Mount Merapi in Central Java shortly before it blew. But until a few months ago, I was completely ignorant of the mother of all recorded eruptions, Mount Tambora in 1815. And when I went to the island of Sumbawa to find out more, I discovered many who live there in the volcano's shadow don't know much about it either.

SULLIVAN: This woman, Rufsiana, works at a coffee plantation and says she doesn't know anything about the mountain or the story. When Mount Tambora did blow, it killed a hundred thousand people in Indonesia and led indirectly to the deaths of hundreds of thousands more a half a world away in Europe during what came to be known as the year without summer.

Dr. HARALDUR SIGURDSSON (Professor of Oceanography, University of Rhode Island): It's rather strange, isn't it, that it's not a famous volcano.

Dr. SIGURDSSON: This is the volcano that has caused most destruction on earth. The greatest death toll of any eruption on the earth, the greatest climate impact on the earth.

SULLIVAN: In this case, global cooling caused by the enormous amount of gas from the eruption that reduced solar radiation reaching the earth. And yet, Tambora remains the Rodney Dangerfield of volcanic eruptions.

Sigurdsson blames the media for the lack thereof.

Dr. SIGURDSSON: For example, the Krakatau eruption in 1883 occurred the week after the telegraph was implemented. So Krakatau became the biggest news story. When Tambora erupted there was no media coverage. There was no communication system except writing a letter that would arrive in London or New York six weeks later at the best.

SULLIVAN: Sigurdsson doesn't seem bothered by the lack of attention still. In fact, he seems pretty content working here in a sort of splendid isolation. He's most recent big find what he calls the Pompeii of the East, the lost kingdom of Tambora, preserved by the volcano's searing heat.

He hopes to do more work on it next year.

Dr. SIGURDSSON: Well, we've got lots of time. It's taken 300 years to excavate Pompeii, and it's still not done so we're in no hurry here either. We've got to leave something to be done by our grandchildren as well so as to keep them busy.

How a Volcano Eruption Wiped Away Summer

How a Volcano Eruption Wiped Away Summer 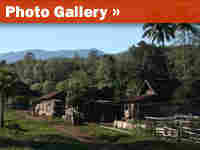 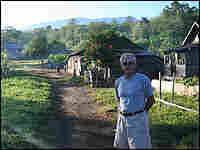 For more than two decades, volcanologist Haraldur Sigurdsson has been researching the volcanic eruption of Tambora. By studying layers of soil, he can decipher the history of the explosion. Jessica Goldstein, NPR hide caption 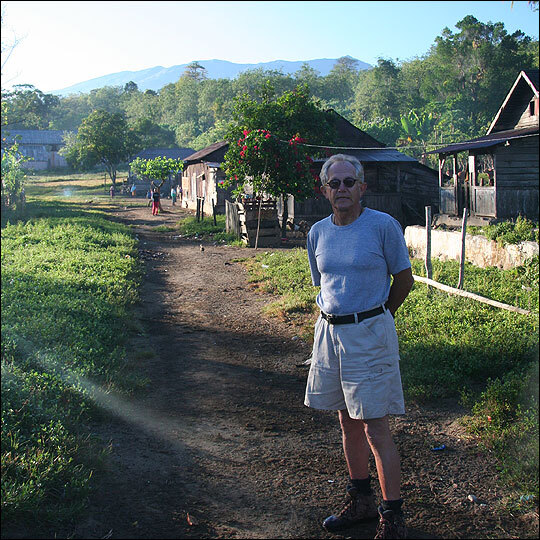 For more than two decades, volcanologist Haraldur Sigurdsson has been researching the volcanic eruption of Tambora. By studying layers of soil, he can decipher the history of the explosion.

The biggest volcanic eruption ever recorded in human history took place nearly 200 years ago on Sumbawa, an island in the middle of the Indonesian archipelago.

The volcano is called Tambora, and according to University of Rhode Island volcanologist Haraldur Sigurdsson, the eruption is one of the most overlooked in recorded history.

"The eruption went up about 43 kilometers into the atmosphere. That is about 30 miles — much higher than any airplane fly[ing] today — and emitting a volume that is about 100 cubic kilometers of molten rock in the form of ash and pumice," Sigurdsson says. "That volume is by far the largest volume of any volcanic eruption in life on earth."

But it was the enormous cloud of gas — some 400 million tons of it — released by the eruption that produced the "year without summer."

When the gas reacted with water vapor in the atmosphere, it formed tiny little droplets of sulfuric acid that became suspended in the stratosphere, creating a veil over the Earth, Sigurdsson says.

This veil of gas acted like a mirror, bouncing radiation back into space and decreasing the amount of heat that reached the Earth's surface, causing global cooling, he says.

Of course, no one knew that at the time, and few people know about it even now. It wasn't until the early '80s, Sigurdsson says, that he caught the Tambora bug. In that decade, researchers taking core samples in Greenland's ice made an amazing discovery.

"You drill down through the ice, and you can count the rings just like in a tree. And people started doing research on the layers, and they found there was a whacking great sulfur concentration at one particular layer: 1816," Sigurdsson says.

"That was first evidence that Tambora had global reach ... and that it was unstudied," he says, adding, "We needed to get much more info on what really happened here."

The Year Without Summer

The year after Tambora erupted, Europe was trying to cope with the aftermath of the Napoleonic Wars.

There was a mass demobilization of soldiers flooding into the labor market.

Patrick Webb, a dean at Tufts University's Friedman School of Nutrition Science, describes the socio-political climate after the wars.

"You had economies disrupted, infrastructure damaged, governments in limbo," Webb says. "And so the conditions were already ripe for something to go wrong."

And something did go wrong in 1816, known as "the year without summer." Temperatures dropped, crops failed and people starved.

"Hundreds of thousands of people died. People were reduced to eating rats and fighting over roots," Webb says. "Most of these people were killed by epidemic disease, [such as] typhus and other things related to starvation. They simply couldn't find enough food."

In America, New Englanders saw snow well into the summer — the average temperature in July and August was 5 to 10 degrees below normal, according to Webb.

Alain Vauthier, who owns one of the oldest vineyards in Bordeaux, France, keeps a fair bit of wine from each vintage in the cellar. He has an impressive collection, which stretches back to the beginning of the 19th century, but there are only a few bottles from 1816. Vauthier says that's as it should be.

"It is not a good vintage," Vauthier says. "It is a bad time, bad weather, bad summer."

Daniel Lawton is the owner of Bordeaux's oldest wine brokerage house. His assessment of the 1816 vintage is even less charitable.

All of this was triggered by a volcanic eruption that happened on the other side of the world.

Reading the Layers of Earth

For more than two decades, Sigurdsson, the volcanologist, has been gathering information from the Indonesian island. His first trip to the volcano, Tambora, was in 1986, and his most recent trip was just a few months ago. His task is made easier, he says, by the scrupulous record keeping done by the earth itself. The layers of the soil on the island are not unlike the layers of ice in faraway Greenland.

"Each layer [is] like [a] page in [a] book. These layers are really a graphic representation of the eruption," Sigurdsson says. "They are drawing out for us, writing down for us, the history of the volcano. And they don't lie."

While he was digging, Sigurdsson discovered something else: artifacts and remains carbonized when Tambora erupted. He calls his excavation site "The Lost Kingdom of Tambora" — a find he also refers to as "The Pompeii of the East."

"The bones are a piece of charcoal," he says. That tells scientists that it was a much bigger explosion — with much higher temperatures.

The explosion was hot enough to melt glass, and it happened so fast, Sigurdsson says, that people living on the island had no chance to escape. The carbonized remains of one woman recovered at the site confirm this.

"She is lying on her back with her hands outstretched. She is holding a machete or a big knife in one hand. There is a sarong over her shoulder. The sarong is totally carbonized, just like her bones," Sigurdsson says. "Her head is resting on the kitchen floor, just caught there instantly and blown over by the flow."

The Lessons of Tambora

All the big volcanic eruptions — Tambora, Krakatau, Pinatubo — have ended up cooling the Earth, causing temperatures to drop.

And that, Sigurdsson says, has some people thinking about replicating the Tambora effect in an effort to slow global warming.

"People have proposed that we induce artificial volcanoes by bringing sulfur up into the stratosphere to produce this effect," Sigurdsson says.

But, he warns, "Do you want to counter one pollutant with another one? I don't think so. But that's been proposed."

Still, Sigurdsson thinks that lessons from eruptions like Tambora can be applied to models used to study global climate change.

Global warming is viewed by many as the most pressing, most dangerous threat. But Sigurdsson warns that catastrophic climate change might come from an unexpected, yet familiar, direction.

"Somewhere on the Earth, with[in] the next 1,000 years, there will be a comparable eruption. And we'd better be aware of the consequences," he says.

He notes that another giant volcanic blast would release large amounts of gases, creating interference in the atmosphere that could cause major disruptions in telecommunications and aviation.

Sigurdsson hopes to study and learn more about Tambora when he returns next year.