Accessibility links
Recovery Begins at San Diego's Scorched Orchards Wetter weather is in the forecast for San Diego — a relief to farmers. The California county is home to one of the nation's most expensive fruits — The Haas avocado — and some farmers are irritated that security prevented them from using their irrigation systems to save their orchards. 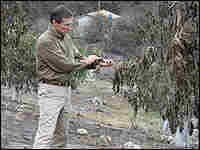 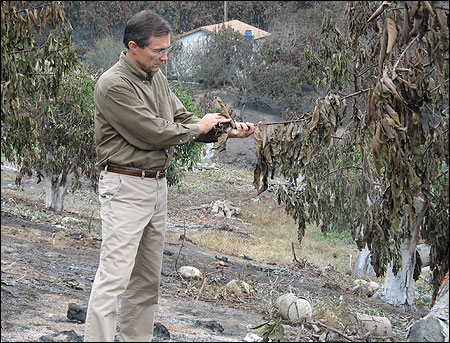 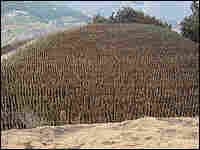 San Diego grows a large portion of the nation's avocados, and about one-fifth of the county's orchards were in burn zones. John McChesney, NPR hide caption 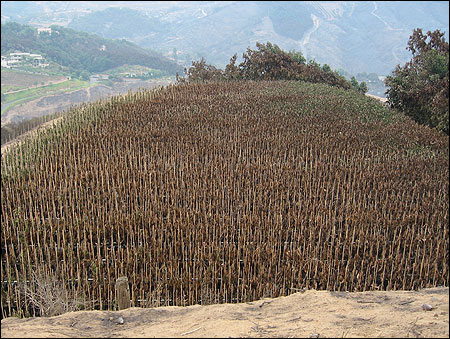 San Diego grows a large portion of the nation's avocados, and about one-fifth of the county's orchards were in burn zones.

Many of the wildfires in Southern California will still be burning over the next week, but much of the danger has passed in San Diego. A few drops of rain were falling Saturday, and the forecast for Sunday is for more cool weather. That's welcome news to everyone in the area, but especially to the area's farmers who have suffered losses during the fires. The county is a major source of cut flowers, plant nurseries, citrus, and one of the nation's most expensive fruits: the Haas avocado. Agriculture adds up to a$1.5 billion industry in San Diego.

On a hillside overlooking Interstate 15, Eric Larson waves a hand across the blackened landscape on both sides of the broad highway.

"This fire jumped an on ramp, a shoulder, eight lanes of traffic, another shoulder and then went up the hill on the other side," says Larson, executive director of the county's Farm Bureau.

On the other side of the interstate is a large palm tree nursery. Only thin trunks remain. And large stands of green forests on the hillsides and hilltops are marked by great stretches of brown. But they only look like forests to the untrained eye.

"Those are avocados there at the top of the hill," Larson says. "What's interesting about San Diego County is we don't have any native forests here. So when you see the sides or the tops of hills green, those are going to be avocado trees, 25,000 acres of them scattered across the county."

The avocado trees are a gift of irrigation. California grows most of the nation's avocados, and San Diego County produces most of those. Many acres of avocado trees have been roasted by wild fires in the last week. The fruit hangs shriveled and brown from drooping limbs. In one orchard, the leaves are still tinted a faint green. Larson snaps off a limb.

"These were full of moisture, so if these don't ignite while the fire's right here, they get crispy like this. And they don't necessarily catch on fire," he says.

But fallen leaves from the trees do burn. The trees drop lots of leaves, and that keeps needed moisture in the ground. But when a fire comes through, those leaves are bad news.

"That leaf litter actually ignited and caught fire. All that heat from those leaves passes up through these trees and pretty much bakes them," Larson says.

And the heat sears into the tree trunks. In the orchard I visit with Larson, we can see bark that has been burned away. If the burn is deep enough the tree will die, and some of these trees are 15 to 20 years old.

So how extensive is the damage to the avocado crop? Larson says it's too early for a definitive answer, but one-fifth of the orchards are in the burn zones.

"That doesn't mean we lost 5,000 acres, because in this grove, we can see where the fire pushed into the grove but didn't go through it," Larson says.

Norman Traner has farmed avocados for 37 years. He's lost some of his 1,500 acres of trees, and he is irritated with the tight security imposed here due looting in the big fire of 2003. He says that security has prevented him and other farmers from protecting their crops with hoses and equipment installed in the orchards.

"We have a lot of water here. Tremendous volume and pressure. We've made the investment to defend them but we need access," Traner says.

Traner adds that he also can't get his workers past the many roadblocks to help save the orchards.

"Sometimes the Border Patrol mans the roadblocks, and our workers, who are mainly illegals, don't have access," he says.

Traner's face, lined from years of working in the sun, is sad as he stares down at an avocado nursery where leafless spindles stick out of row on row of pots.

So now Traner and other farmers will go into their orchards, trim out the badly burned trees, and wait to see if the others survive. Traner says he and many others have been through this before, and while this is worse, it won't drive them away.