Accessibility links
Escaped 'Cole' Bomber Found in Yemen The man convicted for the 2001 bombing of the U.S.S. Cole, which killed 17 American soldiers and wounded 39 others, has resurfaced in Yemen after he and more than 20 others escaped from prison. Newsweek's Michael Isikoff says all signs indicate that the United States is powerless to force the Yemeni government to put Jamal al-Badawi back on death row.

The man convicted for the 2001 bombing of the U.S.S. Cole, which killed 17 American soldiers and wounded 39 others, has resurfaced in Yemen after he and more than 20 others escaped from prison. Newsweek's Michael Isikoff says all signs indicate that the United States is powerless to force the Yemeni government to put Jamal al-Badawi back on death row. 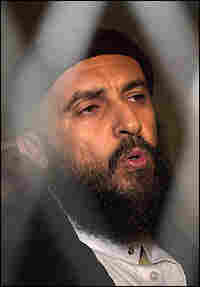 Well, you know, you'd think that killing 17 American soldiers in a terrorist bombing, injuring many more would pretty much ensure a life behind bars, even in a country that takes kind of a dim view of U.S. foreign policy.

But at last check, Jamal al-Badawi - was convicted of the 2001 bombing of the USS Cole in Yemen. At last check, he was at his house in Yemen entertaining visitors in full view of Yemeni authorities. Now, this is the same guy who was sentenced to death at one point and escaped from prison. We're wondering how exactly this happened and what does this say about the U.S. war on terror abroad.

BURBANK: So tell me a little bit about this guy, Jamal al-Badawi, his role in the 2001 bombing of the USS Cole.

Mr. ISIKOFF: It was critical. He was the local mastermind of the operation. He was a follower of Osama bin Laden, been to Afghanistan, met with Osama, and was directed by a couple of his senior lieutenants - Bin Laden's senior lieutenants - to help organize the attack on the USS Cole. October 2000, a suicide bombing of the U.S. Naval warship killed 17 sailors, 39 wounded. '

Badawi had recruited the suicide bombers, rented the skiff that was used to attack the ship, and actually was, you know, one of the key players. And, you know, that - the Cole bombing is probably forgotten today. But that was a real wakeup call for U.S. officials in Washington.

This happened in the latter months of the Clinton administration. There had already been the embassy bombing by al-Qaida, but the Cole clinched it that Bin Laden and al-Qaida were out to kill Americans; they were going to attack American interests all around the globe. And, you may remember, there was a big - in the post-9/11 sort of post mortems, one of the big questions is why neither the Clinton administration in the last few months or the Bush administration in its first nine months did anything to retaliate against the Cole bombing.

Bin Laden, after the Cole bombing, actually celebrated the event. We're reading a poem exalting how the Cole had gone down to her doom videotape that went out around the world. It was a very big moment in al-Qaida's war against the United States.

Badawi actually was a - confessed to his role in the bombing in January 2001 to an FBI agent named Ali Soufan, who interrogated him in Yemen. This is the big John O'Neill investigation that got lots of attention that, you know, there was always suspicions that Yemenis weren't really cooperating. But they did allow Soufan to interrogate Badawi. He confessed, it's what's clinched it; that this was a al-Qaida operation. In any case, Badawi…

BURBANK: And he gets the death penalty right?

Mr. ISIKOFF: …in 2004, was convicted of the Cole bombing, got the death penalty. Then last year, in an act that really surprised a lot of officials, he escapes from prison to - he and 22 others - looked very much like an inside job. Then just a couple of weeks ago, he turns himself in, pledges allegiance to the Yemeni President Saleh, and is granted his freedom. And last week, as you pointed out, is greeting well-wishers at his home in Aden. This absolutely infuriated U.S. officials.

I talked to Ali Soufan last week, he was just beside himself that this had happened. This guy has the blood of 17 sailors on his hands. Soufan told me, he said, mark my words, this guy will kill again. He's a fanatic follower of bin Laden.

BURBANK: What do you think, Michael, what do you think this says for the U.S. in terms of - the U.S. is obviously is not happy about this, but they can't seem to do much about it. I mean, do they just look feckless?

Mr. ISIKOFF: Right. I mean, it's a real sign of our waning influence in the region. It's hard to imagine that three or four years ago, the president of Yemen, nominally an ally, would have taken a step like this, a big poke in the eye. Look, Yemen has always been a country where there is great deal of sympathy for al-Qaida. Remember, bin Laden comes from a Yemeni family.

The U.S. - the hostility to the United States is great, it's always been great. It's not - it's a country where cooperation with the U.S. law enforcement has never - and intelligence - has never been high. But I think this is a sign, again, of waning influence in the region where countries, nominally allies, are just not afraid to just tell the United States, forget it, we're going to deal with our own local concerns rather than yours. Interesting, one of the things…

BURBANK: Well, Michael, I'm going to have to just stop you right there because we're almost out of time.

BURBANK: I assume you're going to be writing about this more though and we'll be looking forward to reading what you have to say in Newsweek magazine.

Michael Isikoff of Newsweek, thank you so much.

Mr. ISIKOFF: Sure. Thank you.

BURBANK: This is THE BRYANT PARK PROJECT from NPR News.