The Boston Red Sox have won their second World Series in four seasons, beating the Colorado Rockies 4-3 in Denver. The Red Sox swept the Rockies, becoming the first team to win multiple championships since 2000.

It was a happy and champagne-soaked scene in the Boston Red Sox clubhouse. The Red Sox won their second World Series title in four years. They beat the Colorado Rockies in four straight games. Last night's clincher in Denver was the closest and most exciting game, with Boston winning 4-3.

NPR's Tom Goldman was there. Getting a bit wet, Tom, I gather?

TOM GOLDMAN: Yes, and I'm going to send the cleaning bill to the Red Sox, and I expect them to pay, Renee.

MONTAGNE: Well, it was a good game, finally. Tell us about it.

GOLDMAN: Yeah. It started like the other three before it. The Red Sox scored early and slowly built their lead. But the Rockies showed some pluck last night. Two late homeruns brought them within a run, to 4-3, but in the end they just couldn't get over the top. The Red Sox just wouldn't relinquish any lead they got. And they didn't make mistakes that would give the lead back, and their great pitching and defense kept the Rockies from scoring, particularly earlier in the game, when Colorado would get runners on base and then be unable to bring them home for more runs.

And Rockies third baseman Garrett Atkins talked about that after last night's game.

Mr. GARRETT ATKINS (Colorado Rockies): You know, when you got runners out there, you need to be able to cash them in like they did all series. And we just - we couldn't - we didn't do it, and you know, that's why they're celebrating. And you know, we're over here a little bit quieter.

MONTAGNE: And of course that's the Rockies' Garrett Atkins. As you mentioned, Tom, the Rockies weren't able to bring those runners in to score, largely because of Boston pitching. Last night's hero, John Lester, has quite a story.

GOLDMAN: He certainly does. He started the game for the Red Sox. And last year at this time he was undergoing chemotherapy after being diagnosed with lymphoma. Now he recovered, and doctors said he was cancer free. And he's slowly worked his way back. Last night he pitched really well. He took a shutout into the sixth inning, and he became just the third pitcher in history to win the final game of the World Series in his first post-season start.

Mr. MIKE TIMLIN (Boston Red Sox): What he went through to get back and do what he did, it's a privilege to watch that. You know, just to watch the strength of God work through that young man.

MONTAGNE: Now, you know, after hearing about Boston's hot shot rookies for the past couple of days, it was a veteran who was the hitting hero last night.

GOLMAN: That's right. Mike Lowell, who came to the Red Sox as part of the trade that brought super pitcher Josh Beckett to Boston, Lowell last night had a homerun, a double, and scored a run, and he was named the Series' Most Valuable Player. Now here's what he had to say. He compared this World Series championship with the one he won in 2003 with the Florida Marlins.

Mr. MIKE LOWELL (Boston Red Sox): You know, I'm on cloud nine. You know, it's unbelievable. I think in '03 no one expected us to do anything so we were kind of beating the odds each time. But I think it's a little different when from the onset a lot of people expect you to win the world championship and if you don't, it's a disappointing year. So for us to come through and do what we thought we were capable of doing is unbelievable. We got a lot of people to give credit to.

MONTAGNE: Mike Lowell might have been a star last night, but the marquee seemed to change every night for these Red Sox.

GOLDMAN: It certainly did, Renee. And it kind of harkens back to those New York Yankees teams of the mid to late 1990s. The Red Sox are similar. Boston now has the best pitcher in baseball in Josh Beckett. They have the best closing pitcher, Jonathan Papelbon. The lineup is a perfect mix of veterans like Lowell, Manny Ramirez, David Ortiz, and young players like Jacoby Ellsbury, who is in the Minor Leagues just a couple of months ago, Dustin Pedroia, another very mature rookie. So they're loaded. And the future looks very bright.

MONTAGNE: So if the Red Sox are the New Yankees, that would be pretty good for them.

GOLDMAN: It would, and it raises the question, are they going to buy up all the players like the Yankees have always done? You know, they have a huge payroll and they're right below the Yankees in how much money they can pay their players. But it's also important to note that Boston's success was not just by free-wheeling spending. Some of the biggest stars of the Series, some who I've mentioned - Pedroia, Ellsbury, Lester, Papelbon, first baseman Kevin Youkilis, who was another big contributor - they were all drafted and they were brought along in the Red Sox farm system.

MONTAGNE: NPR's Tom Goldman speaking to us from Denver. 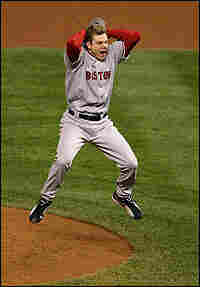 Jonathan Papelbon lifts off after the Red Sox defeat the Rockies in Game Four of the World Series. Jonathan Daniel/Getty Images hide caption

Our very own Monday morning quarterback, Bill Wolff, talks about the weekend in sports.

See our blog for an open thread, "New England Now the Boss of Us All."