Accessibility links
Critics Fault Response to San Diego Fires A week after wildfires in southern California force a quarter-million residents to flee their homes, critics complain that mass evacuations were only necessary because San Diego's fire response wasn't up to the challenge. The fires are now largely under control.

A week after wildfires in southern California force a quarter-million residents to flee their homes, critics complain that mass evacuations were only necessary because San Diego's fire response wasn't up to the challenge. The fires are now largely under control. 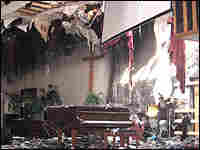 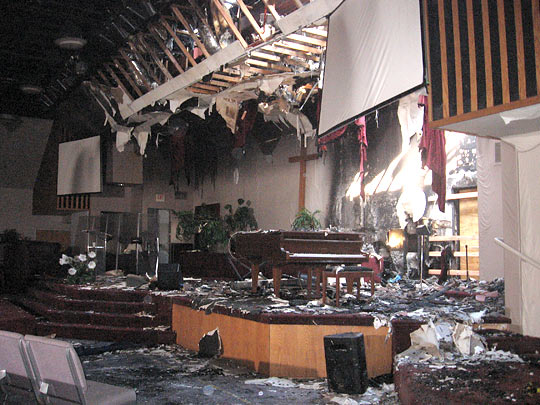 Last week's fire ripped through the sanctuary of the Rancho Bernardo Baptist Church in San Diego.

Most of San Diego County schools reopened today. Just one week ago, wildfires forced hundreds of thousand of residents to flee their homes. The fires are largely under control now, though some critics complain that mass evacuations were only necessary because San Diego's fire response wasn't up to the challenge.

CARRIE KAHN: Nothing says life is getting back to normal more than a good San Diego Chargers tailgate party.

Ms. KIRSTEN HENDERSON (San Diego Chargers' Fan): We need a day off of worrying and freaking out.

KAHN: There weren't any beer or broth at the Rancho Bernardo Community Baptist Church.

KAHN: Last week's fire ripped through the church's sanctuary. But yesterday, Louise Wagner and dozens of volunteers served up lunch for Sunday worshippers. Wagner says, four years ago, in the devastating Cedar Fire, firefighters couldn't save nearly as many homes here as they did this time around. Fewer than 2,000 were lost.

Ms. WAGNER: Even though it wasn't good, they learned. So there was progress made.

KAHN: Among that progress, which has been wildly praised, is improved communication between the county's multiple fire departments and the new Reverse 911 system that helps safely evacuate more than half a million people. Still, UC-San Diego Political Science Professor Steve Erie says those improvements were the least expensive and politically expedient to make.

Dr. STEVE ERIE (Associate Professor of Political Science, University of California-San Diego): We're only talking about adding 20 to 30 dollars a month to the average property tax bill in San Diego to begin to bring this city and county, this region, up to national standards. Elected officials won't propose it and voters will say no.

KAHN: After the 2003 Cedar Fire, San Diego's fire chief told the city council he needed at least 22 more stations at a cost of $40 million a year. The council balked and the chief quit. U.C. Professor Erie says San Diego's firefighting strategy now has just rely on others to come to the rescue.

Dr. ERIE: San Diego has been on the federal dole for a hundred years. It was a Navy town, and we're used to, in a sense, asking for help from outsiders and not doing it ourselves.

KAHN: It sure paid off for Los Angeles during last week's wildfires in Malibu in northern L.A. County. Freeman says he got first word of a fire in Malibu at five in the morning. By 6 a.m., he had five of the county's nine aircraft dousing the blaze. Only 27 homes in L.A. County were lost. But in San Diego, the air assault was delayed for the first day and a half as bureaucratic snafus and safety issues kept aircraft on the ground. Freeman says every fire is different, but because his pilots know their terrain so well, they will fly in conditions other pilots won't.

Mr. FREEMAN: If you rely on outside aircraft, they may not be as familiar with every nook and cranny of that county.

KAHN: So thrifty that one year after the devastating Cedar Fire, San Diego voters defeated a hike in the tourist tax that would have funded additional fire and public safety resources.

As firefighters look close to bringing a week of devastating fires under control in Southern California, forecasters are warning there's a chance that moderate winds could return in the next week to whip up the blazes.

Because of that, one fire official said "it's a little premature to be celebrating." He said officials hope to control all the fires within a week, but that fierce, dry winds could send fire crews "off to the races again."

More than a dozen fires are now fully surrounded and seven other blazes are between 50 and 97 percent contained.

Meanwhile, nearly all evacuation orders have been lifted, allowing residents to go home, assess damage and decide what to do next.

The wildfires are blamed for seven deaths.

A week after a half million people fled Southern California's wildfires, shelters began closing and residents were figuring out their next steps as the threat of more fires loomed over the region.

The winds, which last week gusted up to 100 mph, pushed flames across more than 500,000 acres, destroying more than 2,000 homes and forcing thousands into emergency shelters in seven Southern California counties.

With nearly all mandatory evacuation orders lifted, wildfire victims have begun assessing damage and trying to figure out where to go next.

In San Diego, the largest remaining shelter is at the Del Mar Fairgrounds, where about 130 evacuees were living, some of them after losing homes.

Many came from other shelters, including high schools preparing to reopen on Monday and Qualcomm Stadium, which was closed by the city of San Diego on Friday to prepare for the Chargers' Sunday football game.