Listen
'The Sharper Your Knife, the Less You Cry'

'The Sharper Your Knife, the Less You Cry' 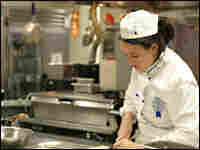 Recipes from the Book

After a layoff from her corporate job at age 36, Kathleen Flinn packed her bags and headed for Paris to fulfill a lifelong dream — to enroll at Le Cordon Bleu culinary school.

Flinn chronicles her Parisian adventures and her experience becoming a chef in her new memoir: The Sharper Your Knife, the Less You Cry: Love, Laughter, and Tears at the World's Most Famous Cooking School.

Throughout the book, Flinn intersperses dozens of recipes, accounts of her "wretchedly inadequate" French, stories of competitive classmates — and a love story, too.

Excerpt: 'The Sharper Your Knife, The Less You Cry' 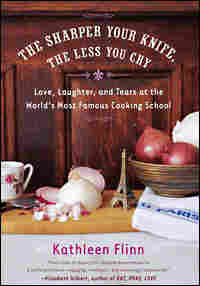 Some people believe that Julia Child dropped a whole chicken on a floor while filming The French Chef. In truth, she only dropped some potatoes she was trying to flip in a pan. But how I wish it were true. Then, I wouldn't feel so bad about the duck.

Everything is going well with Canette Rotie Aux Navets, roast duckling with turnips. Aiming below the knee joint, with a whack the webbed feet come off in one swift blow. Chef Bouveret whistles as he walks around the room and collects them in a large stainless steel bowl to toss in the bin; the sight looks like a host of Daffy Ducks were bumped off and stored, feet side up. I pick off the excess feathers, cut out the wishbone and truss it up into a neat package. Then I follow Le Cordon Bleu's precise roasting instructions.

La cannette goes on its side in a hot oven for 10 minutes. Then the duckling is turned to the other side for 10 minutes. Adding mirepoix, it is turned on its back for 15 minutes to finish. I'm dubious about the short cooking time until I see the duckling, brown and tender, its skin just ever so taut. I rest the pan on the open oven door as I insert my roasting fork into the cavity to turn it over for the last minutes of cooking.

Then my wrist hits the edge of the hot pan. My duck flies from the roasting fork into the air and drops onto the floor. It keeps rolling, like a succulent little football, to the edge of Anna-Clare's stove.

Now there is one thing that's true about Julia Child. She said that you should never confess to mistakes that were not witnessed by others.

"Remember, you're alone in the kitchen," she would say. "You must stand by your convictions and just pretend that was the way it was supposed to turn out."

Of course, here I am not alone. There are nine other students, plus the nosy Algerian dishwasher in the kitchen restocking pans. Mercifully, Chef Bouveret is out of the room. Anna-Clare eyes the duck with a look of horror for a good reason. The sous-sol sent up only five ducks today. We're sharing this one.

I put a finger to my lips to Anna-Clare and the dishwasher. Without a word, I scoop up the hot duck with my side towel and toss it into the pan, shove it in the oven and slam the door. I stand up, and turn to bump into L.P. standing in front of me. Her face says it all. She doesn't approve, and I sense a lecture. But then, Chef Bouveret returns to the room, whistling and triumphant with finding the turnips missing from the class basket.

I proceed with my recipe and plate as usual.

By now, whispered word has spread in the kitchen of the dropped duck. Pele the dishwasher peeks around the corner. Will I let the chef taste the contaminated duck?

Chef tries the sauce. "Good consistency," he says, "but it needs more salt." My vegetable cuts earn a "bien." He cuts into a tender turnip. His hand, clutching a small plastic spoon, hovers above the duck breast meat, sliced thin and fanned out on the plate. Instead of taking a bite, he directs my attention to the coloring of the meat.

In the locker room, Anna-Clare and I debate the duck. Researchers at the University of Illinois say the so-called "Five-Second Rule" isn't a myth. They say when you drop food on the floor, it's still safe to eat if you pick it up within five seconds. Surely, our duck wasn't on the floor that long.

Such intrigue over a duck is nothing. We are learning that it's best to keep the chefs happy, even if it requires the occasional bit of clandestine work.

The following day, we are to saute three pieces of beef to specific doneness. We are instructed to make one bleu (bloody), rare (a little less bloody) and what the French call a point (sort of medium rare.) The chefs have taught us a trick to determining the doneness of meat using our hands. It goes like this: Relaxing the hand, hold thumb to forefinger, as if making the O.K. symbol, and touch the soft pad under the thumb with your other forefinger. That's bleu. Touch the thumb to the middle finger, the bump gets a bit taut. That's the way that rare meat feels. The thumb to ring finger equals medium rare.

The thumb to pinky? That's well done, or "Americain," as one chef says.

At the other end of the table,there's some shuffling when Chef Bertrand leaves the room. Ramona has overcooked all her steaks and utterly destroyed her bearnaise sauce. Students quickly converge to assemble an adequate plate, chipping in a piece of meat, some sauce and some warm potatoes Pont Neuf, which are essentially large French fries. Chef returns, looks over her plate, deems the sauce too salty and leaves. A minute later, he returns, tastes the same sauce presented by L.P., and declares it perfect. C'est la vie.

Reprinted by arrangement with Viking, a member of Penguin Group (USA) Inc., from THE SHARPER YOUR KNIFE, THE LESS YOU CRY by Kathleen Flinn. Copyright © Kathleen Flinn, 2007 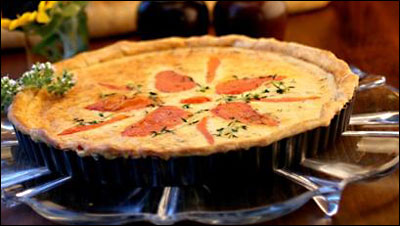 Quiche is like pizza — it can be made with almost anything. This version uses the onions and tomatoes from the Pissaldière, but try asparagus, ham, artichokes, whatever. The onions will seem an insurmountable pile, but they reduce drastically. If good tomatoes aren't available or time is short, use soft sun-dried tomatoes. Prepared pie crust dough may be used or make your own pâte brisée from the "Extra Recipes" in the back of the book. Quiche may be served hot, warm or chilled, and reheats well in a low oven.

Preheat oven to a low heat, 250°F /120°C. Slice an 'x'on the bottom of each tomato. Drop into boiling water for a few seconds, then plunge into a bowl of ice water. Tear the flaps on the "x" to remove skin. Cut out the core and then quarter and remove the seeds. Line slivers on parchment atop a baking sheet. Drizzle on the oil and add garlic, thyme and salt. Gently bake for about 1 1/2 hours, or until they are tender.

Meanwhile, in a large sauté pan melt the butter with the olive oil. Add the onions and bay leaf. Cook and stir patiently until they're brown and soft, about a half hour. Once browned, sprinkle with flour and a dash of salt and cook another 2 minutes. Set aside to cool. Remove the tomato petals from the sheet, let cool.

Increase oven to 425° F / 220°C. Roll out the dough, press it into a quiche or pie pan. Pierce the bottom with a fork. To keep its shape, set parchment or aluminum foil in the center and fill with pie weights or dry beans. Bake for 5 minutes. Remove weights, brush the pastry with beaten egg and return to oven for 7 minutes. Cool slightly.

Whisk the eggs and cream in a bowl. Stir in about one-third of the cheese, salt, pepper and thyme. Stir in the cooled onions and then pour into the pastry shell. Arrange tomatoes in decorative pattern on top. Sprinkle on remaining Gruyère. Bake for 25 to 35 minutes until firm, slightly browned and a bit puffy. Makes one quiche, or six to eight slices.

Have feedback on this recipe? Email info@kathleenflinn.com

From "The Sharper Your Knife, the Less You Cry," Viking/Penguin, all copyright reserved 2007

This classic red wine sauce can accompany any kind of red meat. Trim extra fat or sinew off the meat to use as the basis of the sauce or, if the meat is too lean, use a few pieces of stew meat. I use a mix of seasoned breadcrumbs and panko, Japanese bread crumbs. A friend of mine skips the whole press- the-mushrooms-into-the-steak part of the recipe and simply adds them to the sauce. This is goo, too, but cut down or omit the breadcrumbs or panko altogether. Serve with an earthy red wine such as a Cabernet Sauvignon. Serves four.

For the sauce: Reduce the wine by half in a small saucepan over medium-high heat. As it reduces, in a separate saucepan, sear the beef trimming in oil over high heat. Degrease by pouring out any leftover fat. Add the onions, celery and carrots and stir until softened. Add the parsley stems. Top with the flour and stir to coat. Add the reduced red wine and the beef stock. Bring to a boil, skim any foam offer the top, and then reduce heat. Let simmer for a half hour while you finish the recipe.

As it simmers, saute the mushrooms in two tablespoons of butter over medium heat until browned. Strain, then chop finely together with bread crumbs, parsley, a teaspoon of salt and several grinds of black pepper (or blend in a food processor).

Preheat oven to 400° F / 200° C. Season the meat with salt and pepper on both sides. Heat the oil over high heat in a skillet. Sear each side about three minutes. Remove from the pan to a cookie sheet lined with foil or parchment. Press the mushroom mixture on top of each steak. Turn on the broiler. Broil until the mushroom coating browns and the meat firms to medium rare, about six minutes. To finish the sauce, strain it through a mesh sieve or a colander lined with cheesecloth. Check seasoning and add salt and pepper to taste. Return it to the saucepan and stir in the remaining butter to finish.

Have feedback on this recipe? Email info@kathleenflinn.com

From "The Sharper Your Knife, the Less You Cry," Viking/Penguin, all copyright reserved 2007 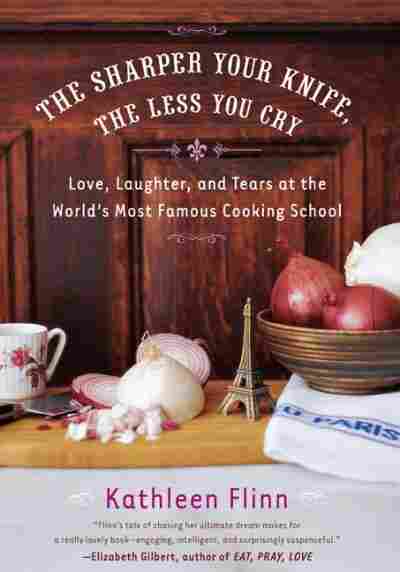 The Sharper Your Knife, the Less You Cry

Love, Laughter, and Tears at the World's Most Famous Cooking School

Title
The Sharper Your Knife, the Less You Cry
Subtitle
Love, Laughter, and Tears at the World's Most Famous Cooking School
Author
Kathleen Flinn