Accessibility links
Will a Warmer World Have Enough Food? Your most direct link to global warming may be the food you eat. The bounty of your local grocery store depends on natural cycles of rain and heat in far-flung parts of the world. Now those cycles are shifting and the effects on agriculture may be profound.

Will a Warmer World Have Enough Food?

Will a Warmer World Have Enough Food? 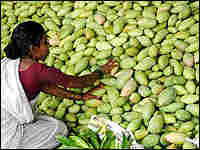 Your most direct link to global warming may be the food you eat. All the bounty of your local grocery store depends on natural cycles of rain and sunlight, cool temperatures and warmth in far-flung parts of the world. Now, across the globe, those cycles are shifting and the effects are likely to be profound — not just for farmers, but possibly even for you.

How profound? A lot of people are trying to figure this out. Here, a look at some of the most important questions about how climate change will affect agriculture — and how agriculture has helped change the climate.

Will climate change make it easier or harder to grow food?

On average, it probably will be harder. It depends, though, on the crop and on the place. In the tropics, where it's hot already, even more heat will stress plants, resulting in smaller harvests. In colder latitudes, many crops will benefit from warmer temperatures. So Canada's farming areas are likely to expand and become more productive. India and much of Africa, on the other hand, probably will produce less food.

Plants also need water, of course, either from rainfall or rivers fed by melting snow. As the Earth warms up, patterns of wind and rain will shift. No one knows exactly where the water will end up or when it will arrive. But most of the big computer models predicting Earth's future climate, including those created by the Hadley Centre for Climate Change in London or NASA's Goddard Institute for Space Studies, foresee declining rainfall in the tropics. This would also depress harvests in those regions.

Finally, there's a good chance that climate change will produce more extreme weather, such as hurricanes and monsoons that can destroy crops and leave people with no food to eat.

Isn't more carbon dioxide in the air good for crops?

Yes. Carbon dioxide in the air is food for plants; it acts like fertilizer. But some plants can't take advantage of the extra carbon dioxide because their growth is limited by other factors, such as scarce water or nutrients in the soil. Predictions of future food production do include some so-called CO2 fertilization, but there is a lot of controversy about how large that effect will be.

So what's the answer? Will there be more food or less?

Most scientists don't foresee major changes in total food production during the next decade or two, as average temperatures increase by just a few degrees. On average, across the globe, the positive effects of more carbon dioxide in the atmosphere are projected to cancel out the negative effects caused by rising temperatures.

Even during this period, though, some regions will benefit and others will lose ground. Food production is projected to increase in temperate regions, such as North America and Europe. It may fall, however, in sub-Saharan Africa or India. As a result, the world will become increasingly dependent on a handful of major food exporters, such as the United States, Canada, Australia, Brazil and Argentina.

Forty or 50 years from now, as today's children reach middle age, things are likely to get worse. As temperatures continue to rise, along with levels of greenhouse gases in the atmosphere, most models show global food production falling. Many of the areas that will be most affected are those least able to purchase food from abroad. Foremost among these is Africa. According to some estimates, tens of millions of people could go hungry unless there's a major effort to help these countries adapt.

What can be done to avoid the worst effects?

Farmers can adapt in many ways, but it won't be easy, especially in the poorest parts of the world. Take one example: The soil in many parts of Africa is highly degraded. There's very little organic matter — decomposed leaves, roots and grass — left in the soil. It isn't replenished because any leftover vegetation gets harvested and used for fuel. Improving the soil would help Africa prepare for climate change by increasing harvests and also helping the soil store water. Actually accomplishing this, though, will require millions of farmers to change how they manage the land, and they would have to find alternate fuels that they can use for cooking.

Technology is also part of the solution, such as new varieties of crops that are better able to withstand heat, drought and floods; techniques for controlling new pests; and systems for using rainfall and melting snow more efficiently. But developing such technologies, and making them available to millions of farmers, will take a lot of money and time. (Read an NPR report on one example of improved seeds, a new line of rice that can survive severe flooding.)

And, of course, anything that increases the wealth of poor countries will increase their ability to buy food from abroad if domestic production falls short.

Yes. It's estimated that farming is involved in 20 percent to 25 percent of all greenhouse gas emissions worldwide. Large amounts of carbon dioxide are released when farmers burn forests and grasslands in order to make way for fields. Farmers also burn plenty of fossil fuels — to power their tractors, harvesters and other equipment. In addition, when farmers plow their fields, it introduces oxygen into the soil, causing microbes to digest the organic carbon found in decomposed roots and leaves in the soil. This also releases carbon dioxide.

The most important fertilizer that farmers spread on their fields is nitrogen. Some of this nitrogen gets converted into nitrous oxide, a powerful greenhouse gas. And finally, rice paddies around the world produce about 100 million tons of methane, another potent greenhouse gas, each year.

Still, agriculture's emissions of greenhouse gases are holding steady, while other sources — mainly burning fossil fuels for other reasons — continue to increase. So agriculture's share of global greenhouse gas emissions declines each year. Food production is more likely to be a victim of climate change than its cause.