Accessibility links
Stan O'Neal: The Rise and Fall of a Numbers Guy Stan O'Neal spent his early childhood delivering newspapers, and picking cotton and corn on the family farm. He was educated in a one-room school built by his grandfather, a former slave. Forty years later, he was head of a $50 billion investment bank.

Stan O'Neal: The Rise and Fall of a Numbers Guy

Stan O'Neal: The Rise and Fall of a Numbers Guy 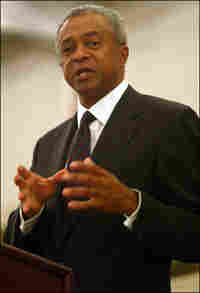 Merrill Lynch CEO Stan O'Neal, shown in a 2003 file photo, is a numbers person in what is, at its heart, a people business. Joe Raedle/Getty Images hide caption 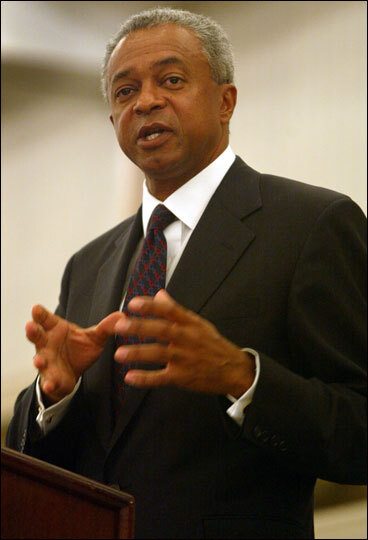 Merrill Lynch CEO Stan O'Neal, shown in a 2003 file photo, is a numbers person in what is, at its heart, a people business.

It's tempting to describe Stan O'Neal's journey from the grandson of a former slave to the head of a $50 billion bank as the stuff of legends, but it's probably not the kind of phrase that O'Neal himself would use.

The CEO of Merrill Lynch, one of the nation's top investment firms, O'Neal is famously self-effacing, and something of a contradiction: a loner in a world that tends to reward glad-handers, a numbers person in what is, at its heart, a people business.

O'Neal credits his meteoric rise to a combination of gumption and luck. "Let's face it: If I had been born 30 years earlier, there's no way that we'd ever be sitting here, having this conversation," he said in a 2003 interview with Newsweek.

O'Neal's apparent demise, analysts say, can be attributed to the vagaries of the market, a few ill-conceived decisions and a long list of enemies he amassed after years of aggressive cost cutting at the investment giant.

An Outsider at 'Mother Merrill'

O'Neal was always something of an outsider at Merrill Lynch, or "Mother Merrill," as it's known by insiders. The firm had a reputation for a nurturing environment, at least by Wall Street standards. Lower profit margins were accepted so that veteran employees could remain on board. O'Neal, however, never bought into the concept of Mother Merrill.

"To the extent that it is paternalistic and materialistic, I don't think that is healthy," he said in a 2003 interview with The New York Times. "I guess there is something instinctive in me that rebels against that."

Former employees describe O'Neal as a corporate leader who did not brook dissent. There were few freewheeling discussions during strategy meetings and he tended to surround himself with people who shared his point of view, according to published reports.

O'Neal has now reportedly lost the support of Merrill Lynch's 11-member board of directors — nine of whom he handpicked. In other words, it's a corporate mutiny.

Born in 1951 in Roanoke, Ala., E. Stanley O'Neal spent his early childhood delivering newspapers, and picking cotton and corn on the family farm. He was educated in a one-room school built by his grandfather, a former slave. (He was born in 1861.)

"We had little," he told students at Washington's Howard University in 2004. "No car, no running water or indoor toilets. But I was lucky because I had parents who knew it was important for me to go to school every day, however inadequate it might have been."

When he was 13, his father landed a job at General Motors in Atlanta and O'Neal's life changed. He soon earned a place studying engineering and industrial administration at the General Motors Institute. He briefly worked as a foreman on a GM assembly line in Flint, Mich. Later, he would attend Harvard on a scholarship, where he earned an M.B.A. At one point, O'Neal reportedly took speech lessons to lose his Southern accent.

In 1986, he joined Merrill Lynch's junk-bond division. From then on, his career moved in one direction: up. By the early 1990s, he was running Merrill's leveraged finance division. In 1998 he was promoted to chief financial officer, a crucial position at a time when Merrill Lynch was faltering and investors were growing impatient.

With what the British newspaper the Financial Times described as "ruthless efficiency," O'Neal began cutting costs. He laid off 24,000 employees — a third of the work force — fired 19 top executives and eliminated perks such as gourmet meals and chauffeured cars.

Not surprising, O'Neal's cost-cutting was unpopular among employees. But soon Merrill Lynch was the most profitable investment bank in the country, making more money per broker than any of its rivals. Suddenly, Stan O'Neal was the darling of Wall Street and the business media. "Meet O'Neal and you can't help but be impressed with his politeness and easy charm," cooed the magazine EuroMoney.

In 2002, he was promoted to chairman and chief executive officer, becoming the first African-American to run a major Wall Street firm. Last year he earned $48 million in salary and bonuses. Asked by Newsweek about his unlikely rise from the cotton fields of the Deep South to the pinnacle of Wall Street, O'Neal replied with almost teenage glee. "It's pretty cool, isn't it? Every once in a while I have to pinch myself."`

O'Neal put in place one of the youngest management teams on Wall Street and he pushed people to match the growth rates of their biggest rival, Goldman Sachs. But in a business that tends to reward schmoozers, O'Neal was a loner with few friends at the banks. "Cool and austere" is how The New York Times described him in a 2003 article. "His eyes give nothing away."

O'Neal also abhorred the clubbiness of Wall Street. "I think clubs have their place but not in modern commerce," he said.

In the end, though, it was not necessarily O'Neal's personality that led to his demise but those very numbers that he loved so much. "Losing a lot of money for shareholders is the surest way to end a career on Wall Street," is how Bloomberg, the financial news wire, neatly summed up the imminent fall of Stan O'Neal. Last week, the company posted a quarterly lost of $2.3 billion, its worst performance in its 93-year history. Merrill's stock price slid 21 percent since the size of the losses began emerging earlier this month.

Much of these losses can be traced to the meltdown in the subprime mortgage markets and some former Merrill Lynch employees suggest that O'Neal was being made a scapegoat for what is a company-wide (and national) problem.

"I can only say that apart from Stan, the global head of sales and cronies also need to be pushed out," former Merrill Lynch employee Peter Dragomer wrote on a BBC blog. "Whoever signed off the credit risk on these instruments definitely needs head-chopping as well."

If Stan O'Neal is indeed booted from Merrill Lynch, he need not worry about his financial future. His company holdings, retirement benefits and severance package would easily top $200 million, regulatory filings show.