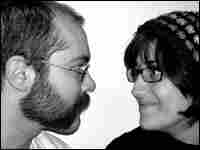 The Seedy Seeds' members don't know you, but they already like you — or so the band's Web site says. It's hard not to like them back, this happily off-kilter duo of Mike Ingram and Margaret Weiner. They came together because of a single conversation and a pile of instruments they didn't yet know how to play; once they learned, they started creating an unusual brand of unabashedly happy music — songs like "Earned Average Dance America." The song mixes electrically bopping pop and a good square dance, complete with guided steps: "Spin spin / Spin spin spin spin / Move to the front / Slide to the left / Hey hey, repeat."

For all the whirling bits and pieces — cyclic banjo and accordion lines, ping-ponging toy synthesizer, overlapping vocals, a repeating bass line that moves in its own lumbering rotation — the band generates a surprisingly cohesive sound. The vaguely nonsensical lyric turns over and on itself, seemingly selected for the sounds of the words, yet with a subtle undercurrent of logic in the action-reaction reminder of "Think... Act... Think... Act" under the choruses. It's dizzying, perplexing and wonderfully fun.