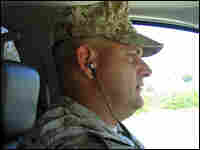 Lt. Col. Colby Vokey decided to join the Marine Corps when he was a teenager because he wanted "to be one of the best." Daniel Zwerdling, NPR hide caption 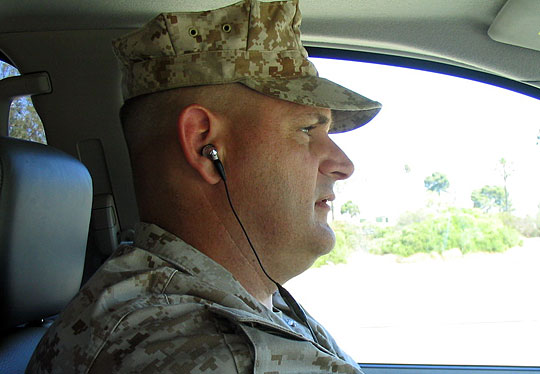 Lt. Col. Colby Vokey decided to join the Marine Corps when he was a teenager because he wanted "to be one of the best."

Hear Vokey on Why He's Leaving the Marines 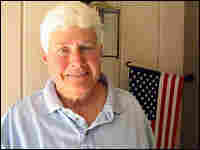 Retired Col. Jane Siegel, former chief of defense lawyers in the Marine Corps, said some officials in Washington are angry with Vokey because he has done "too good a job" defending the Constitution. Daniel Zwerdling, NPR hide caption 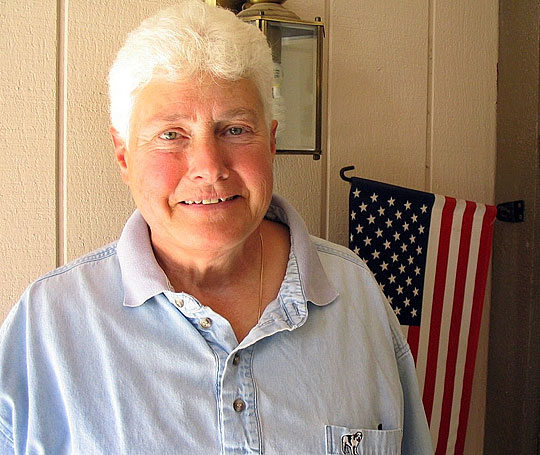 Retired Col. Jane Siegel, former chief of defense lawyers in the Marine Corps, said some officials in Washington are angry with Vokey because he has done "too good a job" defending the Constitution.

Hear Siegel on How Vokey's Outspokenness Hurt His Career Goals 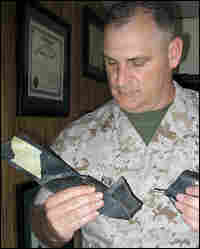 Vokey said that after an Iraqi rocket hit and exploded into these pieces, roughly 30 feet from where he was standing during the Gulf War in 1991, he put on his helmet — and kept it on for the rest of the war. Daniel Zwerdling, NPR hide caption 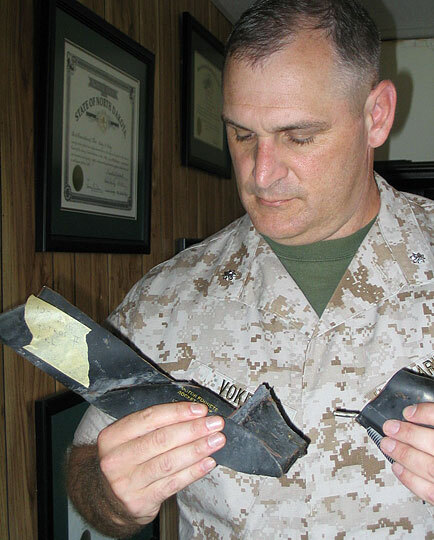 Vokey said that after an Iraqi rocket hit and exploded into these pieces, roughly 30 feet from where he was standing during the Gulf War in 1991, he put on his helmet — and kept it on for the rest of the war.

Hear Vokey Talk About Shrapnel that Almost Hit Him in Iraq

During his interview wtih NPR, Vokey would not identify exactly which officials in the military and the Bush administration he believed have abused the system of justice. When pressed, Vokey read from Article 88 of his copy of the Manual for Courts-Martial. Article 88 pertains to "contempt toward officials."

By all accounts, Colby Vokey is a model officer in the U.S. Marine Corps, at one point helping command an artillery unit in Kuwait during the Gulf War in 1991.

For the past four years, Vokey has served as chief of all the Corps' defense lawyers in the western United States — and he's played a key role in some of the military's most sensitive legal issues, including the murder investigation in Haditha, Iraq, and in the debate about detainees at the U.S. prison camp at Guantanamo Bay.

So when Vokey announced recently that he wanted to leave the Corps, it said something troubling about the military system of justice that he's served for almost 20 years. Vokey charges that some commanders and officials in the Bush administration have abused the system of justice, and he's going to retire from the Corps May 1, 2008.

People who know him say that privately, Vokey has acknowledged he is "angry" and "bitter." Publicly, Vokey describes himself as "fed up."

"I think changes to the system are well-overdue," he told NPR. "And it's a little frustrating when you see problems are highlighted time and time and again."

So how did Vokey, who's stationed at Camp Pendleton in California, evolve from a gung-ho warrior helping command an artillery unit in Desert Storm to a disillusioned officer?

Vokey says he can remember the exact moments that he decided to become a Marine, and then later, a Marine lawyer.

Just after he arrived as a freshman at Texas A&M, he met an officer in the Corps. "He was in his Marine uniform — the green trousers, the tan shirt, the ribbons, the rank, his hat," Vokey said. "Every time he made a movement it was sharp, it was crisp. You knew who was in charge. And it was him. He looked like he was one of the best. And I wanted to be one of the best."

Years later, after he had enlisted and fought in Desert Storm, Vokey got called to jury duty in a court-martial.

Vokey said it was a routine case against a Marine accused of writing bad checks. On the surface, he said, it resembled any trial in the civilian world — there was a military judge, a military prosecutor and a military defense lawyer, which the Corps always provides to defendants for free. But Vokey said when he and the other jurors began deliberating, he saw one of the biggest potential problems that can prevent service members from getting a fair trial: the senior officer on the jury tried to order everybody else how to decide the verdict.

"We walked into the deliberation room, closed the door, sat down and he said, 'All right, let's convict this guy. Let's get out of here'," Vokey said. "I said, 'Whoa, sir, I think we're supposed to talk about the evidence first.' And he said, 'Jesus Christ, you think this guy's not guilty?'"

Battles in the Courtroom

Vokey said that's when he decided to fight his battles in the courtroom — to make sure that commanders never manipulate the system of justice.

Commanders have the power to do just that, if they wanted: The same commander who accuses a Marine of breaking the law might also pick the members of the jury, which will decide if the commander is right. And that same commander might supervise the lawyer who defends the Marine against his accusations.

But Vokey teaches his defense lawyers that they have to fight commanders with every legal weapon they've got, even if it makes the commanders angry.

When he trains young Marine defense lawyers, he tells them "you have one loyalty, and that's to the client," Vokey said.

"We are an American military," said Tom Hemingway, who retired earlier this year as Brigadier General and legal advisor at the Pentagon. "We're here to support American values, and one of the things that we have in our disciplinary system, as a requirement, is that the trial system be fair."

Hemingway said that if troops believed that commanders manipulate the system of justice, "it would destroy morale. You want people in an all-volunteer force to serve willingly. If they think the system is unfair, then they're not going to re-enlist."

But Vokey says that is one reason he's feeling demoralized: he has fought cases in the past few years where officials have tried to sway the system.

For example, after officials filed criminal charges against eight Marines on the grounds that they were involved in massacring 24 unarmed civilians in Haditha, Iraq, the Corps assembled one of the biggest legal teams in recent history to prosecute the men. But Vokey says officials told him he had to use a much smaller team to defend them. "It made me very angry," Vokey says. "We didn't have the people and the tools that we needed to adequately defend these Marines. It really sends a message that the Marine Corp's trying to railroad these guys."

The prosecution argued that the Marines went on a senseless rampage; Vokey argued that the men fought against insurgents as they were trained to do and when civilians tragically got caught in the way, officials decided to turn the troops into scapegoats.

After Vokey fought fellow officers over the issue, a key general gave him permission to organize a much bigger military defense team, which has persuaded military investigators to drop many of the original charges.

Vokey has also watched thousands of Marines come back to Camp Pendleton from the war in Iraq and Afghanistan. Some have developed post-traumatic stress disorder or other serious mental health problems, and then taken illegal drugs or refused to show up at the base. To punish them, commanders have kicked them out of the service, with few or no benefits.

Vokey says he agrees that commanders must punish soldiers who break the rules or discipline would fall apart. But he says the system is too rigid and should blend discipline with compassion.

"What's upsetting is we've created the situation" by sending the Marines to war, Vokey said. "They fought for their country. And if we broke them, we should fix them."

The U.S. has imprisoned hundreds of "enemy combatants" at Guantanamo Bay in a military legal system that Vokey denounces as "horrific." Vokey saw the system first-hand when he agreed two years ago to defend a teenager there who had been charged with murdering a U.S. soldier in Afghanistan. Vokey said he knew the case would be difficult, but he discovered that the legal system at Guantanamo is a "sham."

Vokey said the military staff constantly harassed him and interfered with his defense work by making it difficult even to meet with his client or show his client the government's evidence against him. The teenager confessed to killing the soldier, but he told Vokey he confessed after being shackled for hours in excruciating positions and bombarded by screeching music and flashing lights.

"Anytime you want to subvert the rule of law to the power of a government, you've got a very bad thing brewing," Vokey told NPR. "As an officer in the Marine Corps I took an oath to support and defend the Constitution of the United States. And now we are perpetrating something that if any other country in the world was doing, we would likely step in and stop it."

Hemingway, who until recently was the top lawyer advising U.S. officials on how to handle detainees at Guantanamo, dismisses those charges. Hemingway said he has asked the staff to investigate complaints by detainees, including Vokey's client, and "we have found absolutely nothing to substantiate that." He added, "I know of no one in uniform who signed up to embarrass the United States of America by running a system that doesn't meet what we consider to be appropriate standards."

Vokey, undeterred, said the legal system at Guantanamo has left him feeling "disgusted."

When asked to identify exactly which officials in the military and the Bush administration he believes have abused the system of justice, Vokey avoids giving an answer. When pressed, Vokey went to his bookshelf, pulled out the Manual for Courts-Martial, and read from Article 88: "'Any commissioned officer who uses contemptuous words against the president, vice president, Congress'" and a list of other officials, he said, "'shall be punished as a court martial may direct.'"

"I need to be careful," Vokey said.

Given that he speaks out like that, Vokey said he was not completely surprised when an official at USMC headquarters called him recently to her office in Washington and fired him as chief of defense counsels in the western United States.

Officials at the Corps would not give NPR an interview despite repeated requests.

But when former Marine Corps lawyers heard about Vokey's firing, they were incensed. Siegel said Vokey's firing sent a chilling message that some officials don't want military lawyers to defend the Constitution too vigorously.

"I believe that Colby Vokey was pulled out of his position because he's doing too good a job," Siegel said. "I think that the people in Washington, D.C., don't like that."

After Siegel and other well-known lawyers wrote a blistering letter of protest about Vokey's firing and lobbied top commanders at Marine headquarters, officials backed down and reinstated him. But critics say the Corps is just doing damage control because officials know that Vokey is planning to leave on his own.