Accessibility links
Toyota's Car of the Future Had Distinctive Beginning More than a decade ago, Toyota engineers designed the Prius, a vehicle that revolutionized the auto industry. A visit to the Toyota City factory in Japan sheds light on the car's distinctive beginnings.

Listen
Toyota's Car of the Future Had Distinctive Beginning 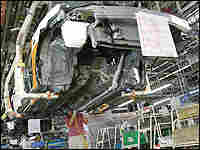 A worker at the Toyota City factory installs the Prius hybrid power cable. In this factory in Japan, 400 to 450 Priuses are made every day. Courtesy of Toyota Motor Company hide caption 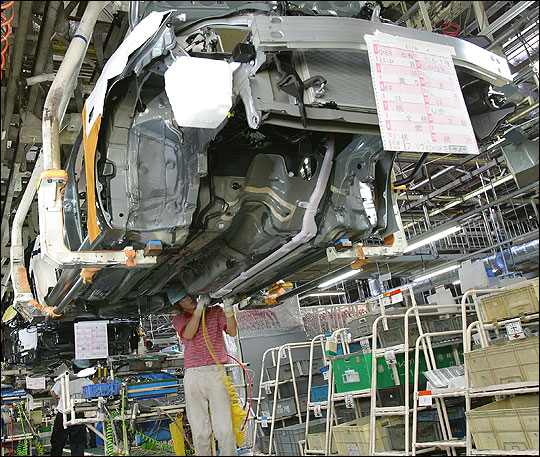 A worker at the Toyota City factory installs the Prius hybrid power cable. In this factory in Japan, 400 to 450 Priuses are made every day.

A worker installs the Prius hybrid battery, one of the reasons behind the car's high fuel efficiency. Electric energy is stored in the nickel hydrogen battery, according to a factory exhibit. Courtesy of Toyota Motor Company hide caption 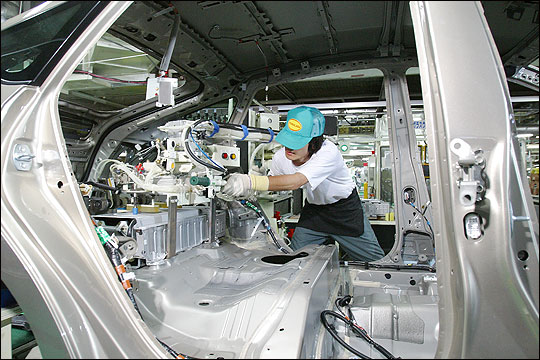 A worker installs the Prius hybrid battery, one of the reasons behind the car's high fuel efficiency. Electric energy is stored in the nickel hydrogen battery, according to a factory exhibit.

In Los Angeles, the Prius is everywhere. The car is famous for having low carbon emissions — a big deal in a city with a lot of smog.

The Prius is the first car with an alternative engine that really caught on in the United States. It has far outsold its nearest competitor, the Honda Civic hybrid. Since its debut, 450,000 Priuses have been sold in North America. Why has Prius had such success?

Jean Jennings, the editor-in-chief of Automobile Magazine, says, "They were ahead of their time, and they were lucky."

But another advantage Prius has over its competitors is that, while it looks like a normal car, it's distinctive enough for drivers to feel like they're saying to the world: "Hey, I care."

"And it also had that fabulous, as in ... fabled 60 mpg EPA rating, at a time when there was a price spike in gas," Jennings says.

The Idea of Prius is Born

Prius began as a vague concept in the brain of Toyota's chairman, Shoichiro Toyoda.

In 1992, he was worried about the future of the automobile and the future of oil. Remember, this was just after the first Gulf War. So he gathered his top engineers and told them to design the car of the future.

"Once you get the basic size of the seat [and] the basic width of the interior, then you can start getting a grasp of the parameters for the whole interior of the cabin space," Nolasco says.

A Car for the New Milennium in the Making

That famous gasoline-and-electric hybrid engine is on display at Toyota's factory in Japan. In the plant, an exhibit extolls one of the secrets to high fuel efficiency: "Electric energy is stored in the lightweight high-powered nickel hydrogen battery."

Factory engineers had experimented with hybrid technology for 20 years, but they couldn't make it affordable.

There was actually a notion to start testing the Prius 24 hours a day. Workers wouldn't work around the clock, but there would be three shifts where protoypes would be tested around the clock. They tested at least 80 different models.

Also, the engineers had to build the car in a little more than a year — a seemingly impossible task. Most cars, even with a traditional engine, take years to develop. But Toyota executives wanted to unveil the Prius in December 1997. They wanted to firmly establish it before the next century began.

Seven years into the next century, Japan's Toyota City factory makes 400 to 450 Priuses every day.

In the factory in Japan where Priuses are made, blue, red and green car doors swing on one floor. On a floor below, workers labor over that dual gas-and-electric engine.

Spokesman Paul Nolasco says each Prius is made to order.

"All the cars that come off the line here already have a customer's name on it. Now, it could be a customer on the street, or it could be a dealer," Nolasco says. "But we don't make those until they're ordered — in other words, we don't build up stock and send it out."

Automobile Magazine's Jennings says the Prius has been a public-relations bonanza for Toyota. She says the company now wears a green halo.

"They got so much great press for their fabulous green image, when in fact their average fuel economy across their whole line was going down, down, down," Jennings says.

At the same time Toyota presented the Prius, it was bringing out massive trucks like the Tundra, which gets 14 mpg in the city, 18 on the highway.

The Prius has lost some of its green sheen. The miles-per-gallon rating has gone down from initial figures. A Prius now gets 48 mpg in the city — it was 60 at one point — and 45 mpg on the highway.

Still, the Prius has shaken up the auto industry. Just three years ago, GM Vice-Chairman Bob Lutz dismissed hybrids as an "interesting curiosity." Now, GM is racing to perfect its all-electric car, the Chevy Volt.

Other cars are being designed to run on corn oil, on hydrogen batteries, and even on compressed air.

In other words, the Prius hybrid is so last century.