Accessibility links
Jill Sobule Sings Her Halloween Horror The musician presents a musical essay on what the singer considers a scourge of modern Halloween: tarty costumes.

The musician presents a musical essay on what the singer considers a scourge of modern Halloween: tarty costumes. 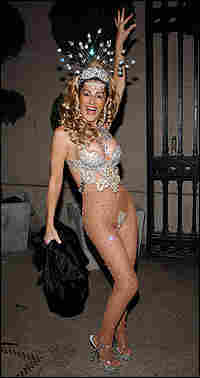 Ah, Halloween. Now, a three-billion-dollar industry that the adults have horned in on the child-like joy of dressing up, but apparently can't resist getting their inner freak on - you know, not just a nurse, Luke…

STEWART: Not just a cat, a sexy cat. That has BPP editorialist/singer/songwriter Jill Sobule steamed.

BURBANK: So much for my sexy nurse outfit.

STEWART: And she had a friend with a Theremin, which you got to love, that she brought along.