Accessibility links
$100-a-Barrel Oil? Perhaps, But Don't Panic Higher oil prices mean you'll pay more for gasoline, heating oil, airline tickets, food and other goods. But many experts say the U.S. economy is better positioned to weather an oil shock today than it was in the 1970s and '80s. 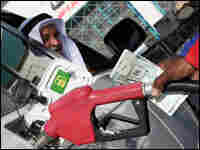 Higher oil prices mean you'll pay more for gasoline, heating oil, airline tickets, food and other goods. But economists say the U.S. economy is better positioned to weather an oil shock today than it was in the 1970s and '80s. Roslan Rahman/AFP/Getty Images hide caption

Oil prices have risen steeply in recent months, from $69 a barrel in late August to around $95 a barrel today. The days of $100-a-barrel oil may not be far off, analysts warn. Does this signal economic disaster?

Probably not, according to most economists.

True, American consumers are almost certain to pay more for gasoline, heating oil, airline tickets, food and goods that have to be transported great distances. And, yes, the economy is already sputtering in the face of a faltering housing market and a weak dollar. It may slip into recession, but it won't be oil prices alone that are responsible, economists say. That's because the U.S. economy is much better positioned to weather an oil shock now than it was in the 1970s and '80s.

Certainly, higher oil prices complicate life for Ben Bernanke, the chairman of the Federal Reserve. On Wednesday, it cut a key interest rate by a quarter-point, the second rate reduction this year. He did so in hopes of driving economic growth, but the specter of inflation now looms larger, since high oil prices tend to push up prices for a wide range of goods and services.

Higher Prices — and Not Just at the Pumps

Higher oil prices mean higher gas and heating prices, of course, but also higher food prices. That's because it costs more to transport the food to grocery stores. Also, farmers spend more on diesel for their tractors and fertilizer for their crops — higher costs they pass on to consumers.

Not all industries are affected equally by the higher fuel prices. The airline industry is especially vulnerable. This year, jet fuel surpassed labor as the industry's No. 1 expense. Every dollar increase in the price of a barrel of crude oil translates into about $470 million a year in additional jet fuel costs for U.S. airlines as a whole — an additional expense the anemic industry can ill afford.

Airlines try to cope with rising fuel costs by bumping up fares and tacking on surcharges. But prices can only rise so far before they hurt demand. Passengers have grown accustomed to relatively inexpensive fares and are not likely to accept steep increases.

One potentially worrying sign: consumer confidence fell more than expected for the month of October, according to The Conference Board, a New York group that tracks the statistic. Consumer spending accounts for two-thirds of all economic activity.

In the past, the oil shocks were caused by a lack of supply — the OPEC embargo in 1973, the Iranian revolution in 1979, the Iran-Iraq war in 1980. Today, prices are soaring because of increased demand. Also, high oil prices are blamed for sparking global recessions in 1973 and 1980, but that's not likely to happen this time, most economists say. For one thing, Americans, on average, earn more money and spend less on energy than they did 30 years ago.

Overall, the U.S. economy is significantly less dependent on oil — and, in fact, on all forms of energy. In 1981, the country devoted nearly 14 percent of its overall gross domestic product to energy, according to the Energy Information Administration. By 2006 that number had fallen to about 9 percent.

"We're in much better shape than we were 30 years ago," says Lester Lave, a professor of economics at Carnegie-Mellon University. High oil prices are like a headwind that slows the economy, he says, and that headwind is about half as strong as it was in the 1970s.

Why the shift? Partly because the U.S. economy is less dependent on manufacturing, which consumes more oil than service industries. The biggest reason, though, is efficiency. Cars and airplanes are more fuel-efficient than ever (though some would argue that they still have a long way to go.) Businesses are also doing a better job of trimming their energy costs.

For instance, UPS, the delivery company, is using new software that maps routes so that drivers can avoid left turns, since those turns eat up lots of gasoline. The system saves the company hundreds of million of dollars each year, according to spokesman Norman Black

Businesses don't like high oil prices, of course, but what they really despise is fluctuating prices. "When oil prices start to yo-yo, people don't quite know what to do," says Lave. "Businesses hate variability." Companies would rather endure a relatively high but stable oil price than a widely fluctuating one.