Accessibility links
Sweet, Sour, Salty, Bitter ... and Umami : Krulwich Wonders... In the 1800s, a chef in Paris created a liquid that deepened the flavor of everything it touched. Its flavor wasn't any combination of the four recognized tastes. It took a Japanese soup lover and  scientists to acknowledge a fifth taste: umami. 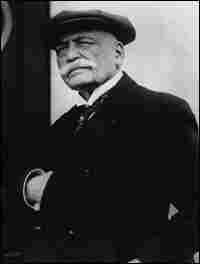 With his invention of veal stock, French chef Auguste Escoffier set cuisine afire. His dishes had a new taste that was neither salty, sour, sweet nor bitter. Hulton-Deutsch Collection/Corbis hide caption

So here's a question you don't hear every day: How many tastes can a person taste?

There's sweet, of course. Then sour. Then salty. And when the Greek philosopher Democritus took up the question several thousand years ago, he added bitter. So that makes four.

Democritus said (not because he did any experiments; being a philosopher, he thought for a living) that when you chew on your food and it crumbles into little bits, those bits eventually break into four basic shapes.

When something tastes sweet, he said, it is because the bits are "round and large in their atoms." Salty is isosceles triangle bits on your tongue, Bitter is "spherical, smooth, scalene and small," while sour is "large in its atoms, but rough, angular and not spherical."

And that's it, said Democritus. Everything we taste is some combination of those four ingredients.

And that made sense to Plato, and made sense to Aristotle, and pretty much ever since even modern scientists have said that's the number: four.

When taste buds were discovered in the 19th century, tongue cells under a microscope looked like little keyholes into which bits of food might fit, and the idea persisted that there were four different keyhole shapes. 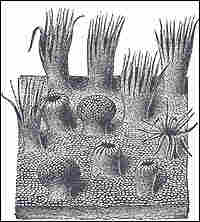 An illustration of taste buds from Gray's Anatomy of the Human Body. When taste buds were discovered in the 19th century, tongue cells under a microscope looked like little keyholes into which bits of food might fit, and the idea persisted that there were four different keyhole shapes. hide caption

So four it is. Four it was.

And then, along came Auguste Escoffier.

What the Chef Tasted

Escoffier was a chef. Not just a chef, in Paris in the late 1800s he was the chef. He had opened the most glamorous, most expensive, most revolutionary restaurant in the city. He had written a cookbook, The Guide Culinaire. And, says science writer Jonah Lehrer (a colleague of mine on NPR/WNYC's Radio Lab), he also created meals that tasted like no combination of salty, sour, sweet and bitter; they tasted new. Escoffier invented veal stock.

And should you choose to listen to our broadcast on Morning Edition, you will hear Jonah and me "cooking" (the sounds were snatched from sound effects records, but I think you will drool anyway) what was then considered a spectacularly new sauce that seemed to deepen and enrich the flavor of everything it touched.

"It didn't just taste good," Jonah says. "This was an epiphany. This was the best food you ever tasted in your life."

But because it was neither sweet, bitter, sour, salty nor any combination of those four, as far as the scientists were concerned, it wasn't real. People may smack their lips, drool, savor and pay enormous amounts of money to M. Escoffier, but what they were tasting wasn't really there. It was all in their heads.

What the Japanese Soup Lover Tasted

Meanwhile, halfway across the world, a chemist named Kikunae Ikeda was at the very same time enjoying a bowl of dashi, a classic Japanese soup made from seaweed. He too sensed that he was tasting something beyond category. Dashi has been used by Japanese cooks much the way Escoffier used stock, as a base for all kinds of foods. And it was, thought Ikeda, simply delicious. 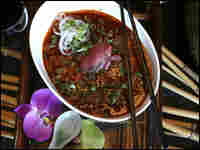 But what was it? Being a chemist, Ikeda could find out. He knew what he was tasting was, as he wrote, "common to asparagus, tomatoes, cheese and meat but… not one of the four well-known tastes." Ikeda went into his lab and found the secret ingredient. He wrote in a journal for the Chemical Society of Tokyo that it was glutamic acid, but he decided to rename it. He called it "umami," which means "delicious" or "yummy" in Japanese.

Glutamate is found in most living things, but when they die, when organic matter breaks down, the glutamate molecule breaks apart. This can happen on a stove when you cook meat, over time when you age a parmesan cheese, by fermentation as in soy sauce or under the sun as a tomato ripens. When glutamate becomes L-glutamate, that's when things get "delicious." L-glutamate, said Ikeda, is a fifth taste. When Escoffier created veal stock, he was concentrating umami. When Japanese made their dashi, they were doing the same thing. When you bite into an anchovy, they are "like glutamate speedballs. They are pure umami," Jonah writes. "Aristotle was wrong. Plato was wrong. We have five tastes, not four. But when Ikeda's findings were published," Jonah says, "nobody believes him."

So Who Was Right?

It turns out, almost 100 years after Escoffier wrote his cookbook and Ikeda wrote his article, a new generation of scientists took a closer look at the human tongue and discovered, just as those two had insisted, that yes, there is a fifth taste. Humans do have receptors for L-glutamate and when something is really, really yummy in a non-sweet, sour, bitter or salty way, that's what you're tasting. In 2002, this became the new view. It's in the textbooks now and scientists decided to call this "new" taste, in Ikeda's honor, "umami." If you want to get an umami headache, add some monosodium glutamate to your next bowl of noodles.

In his new book, Proust Was a Neuroscientist, Jonah tells eight stories that share a common theme. In each case, (he chooses Marcel Proust, Walt Whitman, George Elliot, Paul Cezanne, Igor Stravinsky, Gertrude Stein, Virginia Wolf and, yes Auguste Escoffier) an artist is busy about his/her work and happens to observe something or sense something about the real world that scientists have not yet noticed, or that scientists say is not true. But because artists are so good at describing what it's like to experience the world, so intent on delivering the truth of what it feels like to be alive, so intuitive, in each of these eight cases, the artists learn something that the scientists don't discover until years later.

Art, Jonah reminds us, describes the same world that science does; art just does it by a different route. And sometimes, more often than you would suppose, the artists get there first.

Excerpt: 'Proust Was a Neuroscientist'

Veal stock was not always the glutamate-rich secret of French food. In fact, haute cuisine was not always delicious, or even edible. Before Escoffier began cooking in the new restaurants of the bourgeoisie (unlike his predecessors, he was never a private chef for an aristocrat), fancy cooking was synonymous with ostentation.

As long as dinner looked decadent, its actual taste was pretty irrelevant. Appearance was everything. Marie-Antoine Careme (1783-1833), the world's first celebrity chef — he cooked for Talleyrand and Czar Alexander I, and he baked Napoleon's wedding cake — epitomized this culinary style. Although Careme is often credited with inventing French cuisine, his food was normally served cold and arranged in epic buffets comprising dozens, sometimes hundreds, of rococo dishes. In Careme's Paris, fancy food was a form of sculpture, and Careme was justifiably famous for his pièces montées, which were detailed carvings made of marzipan, pork fat, or spun sugar. Although these sculptures were pretty, they were also inedible. Careme didn't care. "A well-displayed meal," Careme once said, "is improved one hundred percent in my eyes." Such insipid lavishness typified nineteenth-century service à la française.

Escoffier considered all this pomp and circumstance ridiculous. Food was meant to be eaten. He favored service à la russe – the Russian style – a system in which the meal was broken down into numbered courses. Unlike Careme's ornate buffets, service à la russe featured a single dish per course, which was delivered fresh out of the kitchen. The meal was staggered, and it unfolded in a leisurely culinary narrative: soup was followed by fish, which was followed by meat. And although the chef wrote the menu, the client dictated the tempo and content of the meal. Dessert was the guaranteed happy ending.

This revolution in restaurant service required a parallel revolution in the kitchen. No longer could cooks afford to spend days sculpting marzipan, or molding aspic, or concocting one of Careme's toxically rich stews. Everything on the menu now had to be à la minute, and cooked to order. Flavor had to be manufactured fast. This new level of speed led Escoffier to make his cooking mantra "Faites simple." Every dish, he said, must consist of its necessary ingredients only, and those ingredients must be perfect. A veal stock must contain the very quintessence of veal. Asparagus soup must taste like asparagus, only more so.

There was one added bonus to this new culinary method founded upon simplicity and velocity: food was served hot. While Carême feared heat (his lard sculptures tended to melt), Escoffier conditioned his diners to expect a steaming bowl of soup. They wanted their fillets sizzling and the sauce fresh from the deglazed frying pan. In fact, Escoffier's recipes required this efficiency: when meals were served lukewarm, the flavors became disconcertingly one-dimensional. "The customer," Escoffier warned in his cookbook, "finds that the dish is flat and insipid unless it is served absolutely boiling hot."