Accessibility links
Getting Brain Food Straight from the Source Eating the omega-3 fatty acids found in fish has its benefits for the developing brain, but some women are advised to eat only limited amounts due to concerns about mercury. But one lab is cooking up brain food from where fish get it: algae.

Listen
Getting Brain Food Straight from the Source

Nailing down the risks and benefits of eating fish is easier said than done. Eating the omega-3 fatty acids found in fish has its benefits for the developing brain, but pregnant women and new moms are advised to eat no more than 12 ounces of seafood per week due to concerns about mercury.

Studies suggest that the benefits of omega-3s outweigh the risks of mercury, especially if women avoid species such as shark, swordfish, king mackerel and tilefish, all of which are high in mercury.

But it is possible to get omega-3s without ever eating fish.

Cooking Up Omega-3s — With Algae

The Martek Biosciences Corporation manufactures DHA from algae, which is where fish get their DHA, explains J. Casey Lippmeier, Martek's senior scientist.

The algae are eaten by smaller marine life such as copepods, "and those are eaten by slightly larger fish," says Lippmeier. The DHA gets passed along the food chain, all the way up to the biggest fish.

In the wild, big fish that have lots of DHA may also have contaminants such as mercury or PCBs in their tissue. So, as Lippmeier sees it, Martek is producing a pure supply of DHA by fermenting algae in big, steel tanks.

When Martek's biologists first came up with the idea of growing algae to produce DHA supplements, no one seemed to notice.

But about five years ago, manufacturers of infant milk formula began adding Martek's DHA to the formula. The decision was based on clinical trials that found infants, particularly preemies, who were fed a DHA supplement did better on cognitive tests than babies who were fed a regular formula. The babies, for instance, were better able to recognize a new face compared with one they had seen before.

The infant formula studies clearly supported babies getting more DHA. But the research also found that the benefits of the supplement did not persist as the infants became toddlers.

This finding led to more questions. It's possible that the benefits of DHA supplementation are short-lived.

In other words, what a woman eats during pregnancy may be more important than what the infant eats after birth.

DHA and the Brain

For pregnant women and developing babies, DHA is crucial. It's found in every organ of the body as well as in muscle tissue and in the brain. DHA makes brain membranes flexible and optimizes electrical signaling.

Animal studies show that when DHA is drastically reduced in the brain, processing slows.

"From neuron to neuron, or from the retina to the brain, those signals will still go," says Norman Salem, a neurobiologist with the National Institutes of Health. "But they may be slower and not as intense."

Other Sources of Omega-3 Fatty Acids

Humans have always consumed omega-3s. Eggs contain some DHA, and organ meats such as liver and brains, are abundant sources, too.

Nuts and seeds such as walnuts, flax-seed and Canola oil contain omega-3s, though the body has to convert these plant sources from alpha-linolenic Acid (ALA) to DHA.

Since fish are loaded with a lot of DHA and protein, Harvard's Emily Oken has made fish the focus of her work.

Oken and her colleagues are among the first to closely track the risks and the benefits of fish-eating in a group of Americans. Eight years ago, they recruited hundreds of pregnant women who shared details of their diets and gave blood samples so scientists could see exactly how much mercury was in their blood.

When the children of these women turned 3, researchers evaluated them using the Peabody Picture Vocabulary Test, which correlates with verbal IQ.

Fish intake was associated with a two-point higher score. But children whose mothers had the highest blood-mercury levels (in the top 10 percent) scored about four points lower on the test. Based on these results, "the best benefit comes with eating fish that are low in mercury," Oken says.

While the cognitive testing differences are measurable, there are not huge swings.

"We think these kinds of exposure are not likely to take kids who would have been a genius and make them below average," Oken says.

Oken's research is ongoing. She and her colleagues plan to continue evaluating the children through the school years to better understand how these associations between fish consumption and mental development hold up. 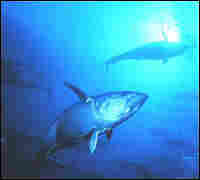 FDA and EPA Recommendations on Fish Consumption
What You Need to Know About Mercury in Fish and Shellfish, FDA, 2004 Report
National Academies of Science 2007 Report: Seafood Choices, Balancing Benefits and Risks