Accessibility links
Mozart's 'Don Giovanni' Many have called Don Giovanni the finest opera ever composed. Mozart's classic is a brilliant combination of stark human tragedy and touching comedy, set to music of limitless genius. It's heard in a new production from Houston Grand Opera. 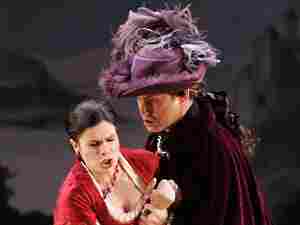 As the legend goes, he was the quintessential rake — a womanizing scoundrel with a list of amorous conquests so long that his right-hand man needs an entire aria just to outline it! His name is Don Juan or, in Mozart's musical version of the story, Don Giovanni.

Mozart's opera has been described as a comedy, and it has any number of uproarious moments. But there's far more to Don Giovanni than just a series of big laughs, just as the notorious Don is more than just an unprincipled, single-minded ladies' man. The opera's comic element is driven by Giovanni's devious schemes and hijinks. But both Lorenzo da Ponte's libretto and Mozart's matchless music ensure that the dire consequences of those schemes are as evident as their humor.

The result is a disturbing ambiguity that's at the core of Mozart's masterpiece. The Don's personality is so beguiling that audiences actually tend to root for him, even as his dark side becomes more and more obvious. Still, when he eventually receives a personal invitation to hell, and his enemies rejoice, it's hard to blame them.

Don Giovanni has been widely regarded as the greatest opera ever composed. That's a pretty bold statement, but however you rank it, Mozart's opera is a brilliant combination of stark human tragedy and touching comedy, set to music of limitless genius. On World of Opera host Lisa Simeone presents it in a new production from Houston Grand Opera, starring baritone Mariusz Kwiecien in the title role.

The Story of 'Don Giovanni' 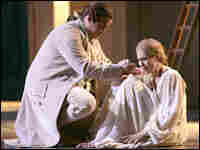 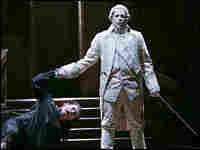 Don Giovanni finally meets his end when the statue of the Commendatore comes to life and challenges him to mend his ways, or face the consequences. Brett Coomer/Houston Grand Opera hide caption

ACT ONE: The central character in Mozart's Don Giovanni is, of course, the Don himself — a quick witted love-'em-and-leave-'em type, with a trail of jilted women in his wake. But in Mozart's opera, we get the feeling that the Don's luck is turning sour.

As the darkly colored Overture subsides, we find Don Giovanni already in trouble. His personal servant Leporello complains bitterly, to himself, about Giovanni's increasingly reckless behavior. And indeed, the Don's most recent attempted seduction — of a noblewoman, Donna Anna — is in the process of going completely haywire.

Donna Anna runs from her father's house screaming vengeance against an unknown intruder who entered her bedroom disguised in a cloak, pretending to be her fiance. Naturally, the intruder was Giovanni. Anna's father, the Commendatore, catches up with the disguised Giovanni and proposes a duel. In the ensuing swordfight, Giovanni kills him. That's just great, Leporello says — first rape the daughter, then murder the father. Giovanni is unconcerned, and strolls away calmly. But when Donna Anna and her fiance Don Ottavio show up and find her father dead, they swear revenge.

The next morning, Giovanni and Leporello stumble across Donna Elvira, another one of Giovanni's conquests. She's tracked him down to insist that he live up to his romantic promises of true love and fidelity. To demonstrate why that's not likely to happen, Leporello reads her an exhaustive list of the Don's former lovers, in the well-known "Catalogue Aria." While Giovanni tries to make a clean getaway, Elvira, too, swears vengeance.

Giovanni now spots a brand new temptation, a young peasant girl called Zerlina. Leporello sidetracks her fiance, Masetto, and Giovanni sweet-talks Zerlina in the tender duet "La ci darem la mano." But Donna Elvira shows up, warning the naive girl to beware. She gives the same advice to Donna Anna and Don Ottavio. Giovanni dismisses Elvira's ravings as a symptom of madness. But eventually Anna recognizes the Don's voice as that of the cloaked man who killed her father. When Giovanni leaves, Anna urges Ottavio to avenge the murder immediately.

Act One finishes up at Don Giovanni's estate, where he's throwing a pre-wedding party for Zerlina and Masetto. Anna, Ottavio and Elivra arrive with masks on, plotting their collective revenge. As the orchestra plays a few dance numbers, a scream is heard from somewhere in the palace. It's Zerlina, trying to fight off Giovanni's advances. The Don tries to blame Leporello for the attack, but everyone sees through the lies. They denounce Giovanni, as he makes yet another narrow escape.

ACT TWO: Leporello is still complaining about the treatment he gets from his boss, especially the dangers he's been forced to confront, and by now he's ready to quit. Giovanni talks him out of it, with the help of a little extra cash.

Giovanni's next scheme is to have his way with the cute young maid who attends Donna Elvira. Giovanni and Leporello switch clothes. The plan is that Leporello — pretending to be Giovanni — will sweet-talk Elvira out of the way. Then Giovanni, dressed in his servant's clothes, can seduce the maid. At first, it all goes swimmingly. Elvira is entranced by the phony Giovanni's poetic words and goes off with Leporello, leaving Giovanni to serenade the maid.

Things go downhill when Masetto shows up with a band of peasants, searching for Giovanni. They're well-armed, and plan to kill him if they find him. Giovanni, still dressed as Leporello, disguises his voice and says he knows where the scoundrel is. After he sends everyone else off in various directions he's free to give Masetto a thorough beating.

After Zerlina comforts Masetto, the scene changes to a dark courtyard. Leporello is still in Giovanni's clothes, and that's about to get him in trouble. As he grows tired of wooing Donna Elvira, Anna, Ottavio, Masetto and Zerlina accost him, believing that they've finally cornered the notorious Don. Leporello begs for his life, astounds everyone by removing his Giovanni disguise, and beats a hasty retreat. Next, Elvira gets a poignant moment to herself, with a dramatic aria lamenting her feelings of hate — and love — for Don Giovanni.

The next scene finds Giovanni and Leporello in a local graveyard. They're discussing recent events when they get quite a start. They're sitting near the giant stone statue of the Commendatore, Giovanni's Act One murder victim — and the statue begins to speak. "You will have your last laugh before the next dawn," it tells Giovanni. Leporello is terrified, but Giovanni is characteristically calm. He orders Leporello to invite the statue to dinner that evening. The statue accepts the offer.

The opera's final scene is set in Don Giovanni's dining room. He's feasting alone, with Leporello attending. A small orchestra plays the popular tunes of the day, including music from Mozart's own opera, The Marriage of Figaro. Donna Elvira arrives, attempting once more to convince Giovanni to turn his life around. He laughs at the notion.

As Elvira leaves she lets out a loud scream. Leporello goes to investigate, and screams even louder when finds the stone statue of the Commendatore knocking at the door. "You invited me to dinner, and I have come," the statue bellows.

Giovanni takes the statue by the hand and a icy chill rushes over him. Three times, the statue demands that Giovanni repent his evil ways. Each time Giovanni refuses. "Your time is up!" declares the statue. Flames rise around the Don, the ground sinks beneath him, and Giovanni descends into hell.

As the opera closes Leporello tells the others what happened, and in a large ensemble they each ponder their next moves. Don Ottavio is anxious to marry Donna Anna — but Anna, who has had a taste of excitement amidst all the turmoil, now says she needs a full year of mourning before she can marry the sedate Ottavio. Donna Elvira is fed up with the perils of romance, and decides to join a convent. Masetto and Zerlina take everything in stride and head home for dinner. Leporello says he'll head for the nearest tavern to find a less troublesome employer.

Finally, everyone concludes that Giovanni has met a just end in hell — the fate that awaits all evildoers. Still, that final ensemble leaves us feeling that somehow, with Don Giovanni gone, the world isn't quite as interesting as it used to be.