Accessibility links
What's in a Name? A Lot The turmoil in Myanmar raises the question of how countries establish their names. Some change their names upon establishing independence from old governments. Others attempt to take on a new identity, but it just doesn't stick. 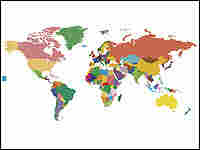 A map of the world. iStockphoto hide caption

The turmoil in Myanmar (or Burma) raises a question for governments, mapping companies and journalists — the country has two competing names, so what do we call it?

Over the years, many countries have changed appellations, some to throw off reminders of colonial rule, others to emphasize a certain heritage or unify a disparate population.

Some names take their places on the world map; others, like "Azania" or "Zaire," just don't stick.

The Case With Myanmar

The name "Myanmar," bestowed in 1989 by the ruling military, is controversial. Opposition groups, and some foreign governments, still call it "Burma" to signal that they regard the military government as illegitimate and lacking the authority to change the country's name.

Benedict Anderson, an emeritus professor of government at Cornell, says there's some justification for the name Myanmar. In a country of many ethnic groups, "it's a way of de-emphasizing the dominant Bamar group, from which the British got the name 'Burma.'" He says the name Myanmar also appealed to the military rulers because it's reminiscent of ancient kingdoms that ruled parts of the territory.

The National Geographic Society uses both names on its maps, and Senior Editor David Miller says that's because Myanmar isn't fully recognized internationally. The United Nations accepted the name change, but Miller says opponents "make a fairly good argument that it's an illegal regime." The United States, which has condemned the military government, pointedly uses the name "Burma," as does Britain, the country's former colonial ruler.

Anderson, an expert on Southeast Asia, says he's actually more surprised by countries in the region that haven't changed their names.

"The Philippines," he says, "still bears the name of a Spanish king (Philip II)." The revolutionaries who fought American control at the turn of the 20th century proposed a name meaning "Land of the Tagalogs," a major ethnic group. That didn't go down well with the dozens of other ethnic groups in the Philippines. The current name hangs on, Anderson says, "because nobody can think of an acceptable alternative."

Anderson points out that some country names from foreign sources really work.

The name Indonesia, for instance, was composed by an English ethnologist, George Earl, from the Latin word Indus, meaning "India," and the Greek word nesos, meaning "island." The region's colonial rulers much preferred the name "Netherlands East Indies," but Indonesian nationalists picked up on the coined version in the early 1900s. It worked for them, Anderson says, precisely because it didn't favor any of the ethnic groups spread over the nation's 6,000 or so inhabited islands.

"It's like America," says Anderson, "you can't tell by the name who's in it."

Disputes Keep Others in Limbo

Some names remain precisely because they're in dispute. "People in Thailand, for instance, are still arguing bitterly over whether to return to the name 'Siam,'" Anderson says. In the 40s, he says, the idea was to have a name for the country that expressed the culture of the dominant ethnic group, the Thai. People who now want to change the name say Siam would encompass the country's many ethnic groups. Those who resist the name change say that Siam is "indelibly tied to the conservative institution of the monarchy."

To complicate matters even further, some people in Thailand have come to accept an alternative etymology that says "thai" is derived from the Thai word for "free," and thus Thailand means "land of the free." The name is, of course, still half English.

Miller says one of the most passionate disputes over a country name in recent times concerns Macedonia. The name refers to a northern province of Greece and, just over the border, to a republic that was once part of Yugoslavia.

Greeks insist that the neighboring republic be referred to as "F.Y.R.O.M.," the Former Yugoslav Republic of Macedonia. The Greeks are fearful that the republic could someday exert a claim on the Greek province. The Macedonians, meanwhile, don't want any part of a name that refers to former Yugoslavia. That's because they're sensitive that their former Yugoslav partner, Serbia, might one day try to exert a claim on Macedonia, which many Serbs refer to as "South Serbia."

Not All Name Changes Last

Some name changes don't stick: opponents of the former white-minority rule in South Africa proposed calling the country "Azania," a non-indigenous name that's been around since Roman times. It never caught on.

Even when a name change makes it onto the maps, it doesn't always stay there. The Belgian Congo went from its colonial name to the Republic of the Congo, to the Democratic Republic of the Congo, to Zaire. (It was Zaire from 1971 to 1997 under the rule of Mobutu Sese Seko, who also changed his own name. It used to be Joseph-Désiré Mobutu). The country is now back to the Democratic Republic of Congo, where it is still sometimes confused with its smaller neighbor, the Republic of Congo, also known as Congo-Brazzaville, to distinguish it from — Oh, never mind.

Miller points out that some nations maintain an easy balance between their local names and their international names. Egypt, for instance, is known in the Arab world by its Arabic name al Misr, but the country promotes itself internationally by the Greek-derived name that raises images of its ancient civilization. "Egypt" is good for tourism.