Accessibility links
Bush Defends Mukasey as Senate Opposition Grows As opposition to the attorney general nominee grows, President Bush defends the former judge's refusal to say if waterboarding is illegal torture. If the Senate fails to confirm Michael Mukasey, Bush hints he might skip the process and appoint someone. 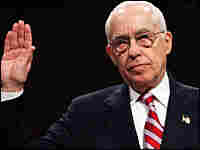 Retired federal Judge Michael B. Mukasey is sworn-in before the Senate Judiciary Committee on his nomination to be attorney general on Oct. 17. His nomination has stalled because he refused to say if waterboarding is illegal torture. Mandel Ngan/AFP/Getty hide caption 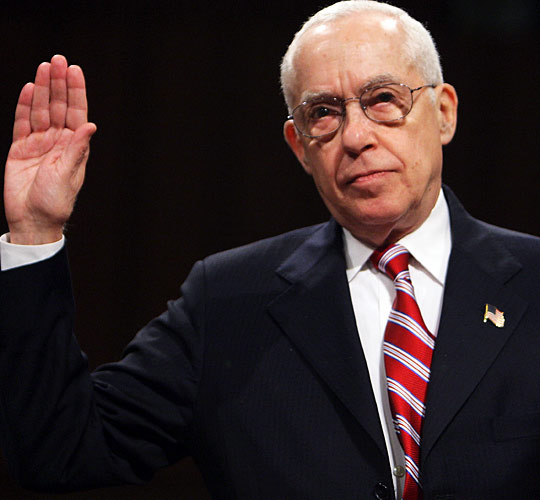 Retired federal Judge Michael B. Mukasey is sworn-in before the Senate Judiciary Committee on his nomination to be attorney general on Oct. 17. His nomination has stalled because he refused to say if waterboarding is illegal torture.

President Bush said Senate Democrats are being unreasonable in their objections to attorney general nominee Michael Mukasey and hinted that if they reject the former judge, he might go around them.

"If the Senate Judiciary Committee were to block Judge Mukasey on these grounds, they would set a new standard for confirmation that could not be met by any responsible nominee for attorney general," Bush said in a speech at the Heritage Foundation, a conservative think tank.

"That would guarantee that America would have no attorney general during this time of war," the president said.

Mukasey is facing a growing opposition in the Senate for refusing to say whether waterboarding, which simulates drowning, is illegal torture.

Sen. Edward Kennedy (D-MA) said Thursday he will oppose Mukasey's nomination because of the waterboarding issue. He said Mukasey's unwillingness to answer definitively on the legality of the interrogation method increases the chances that it could be used against U.S. troops.

"Judge Mukasey appears to be a careful, conscientious and intelligent lawyer, and he has served our country honorably for many years," Kennedy said. "But those qualities are not enough for this critical position at this critical time."

Bush told members of the Heritage Foundation that details on U.S. interrogation techniques — such as waterboarding — are classified and Mukasey is not privy to them.

"He is in no position to provide an informed opinion" on waterboarding, Bush said.

During an unusual session in the Oval Office earlier Thursday, the president framed Mukasey's nomination in national security terms.

"A key member of the team that works to protect the American people is the attorney general," he told reporters. "It's important for Congress to pass laws and/or confirm nominees that will enable this government to more effectively defend the country and pursue terrorists and radicals that would like to do us harm."

The comments raised questions about whether Bush would nominate anyone else to succeed Alberto Gonzales as the nation's top law enforcer. Bush could bypass Congress by filling the job with someone serving in an acting capacity or appointing someone while lawmakers are in recess to serve out the last 14 months of his administration.

Asked whether Bush was saying he would not nominate anyone if Mukasey were to be rejected, White House spokeswoman Dana Perino said, "We don't believe it would come to that. No nominee could meet the test they've presented."

So far, four of the 10 Democrats on the Senate Judiciary Committee have said they will vote against Mukasey in the first test of his nomination Tuesday.

Sen. Sheldon Whitehouse (D-RI) said Mukasey's refusal to say waterboarding is "unconditionally wrong" would leave open the possibility that U.S. agencies could cross a moral and legal line and use it on detainees.

A trio of Republican senators tried to mollify all sides Wednesday, asking for a commitment from Mukasey if he is confirmed.

"We urge you to publicly make clear that waterboarding can never be employed" by any U.S. government agency, wrote Sens. John Warner of Virginia, Lindsey Graham of South Carolina and John McCain of Arizona.

From NPR reports and The Associated press