Accessibility links
Former Colleague: Peake Lacks Vision to Fix VA A retired Army general who worked closely with Dr. James Peake, President Bush's pick to head the Department of Veteran Affairs, says Peake is a dedicated and hard worker who gets too bogged down in details. That's a problem, given the current state of the VA medical system. 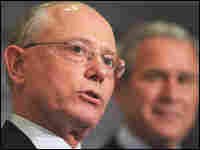 Retired Army Lt. Gen. Dr. James Benjamin Peake will "insist on the highest level of care for every American veteran" as head of the VA, according to President Bush. Mandel Ngan/AFP/Getty Images hide caption 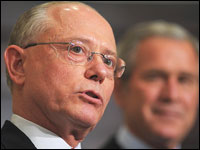 Retired Army Lt. Gen. Dr. James Benjamin Peake will "insist on the highest level of care for every American veteran" as head of the VA, according to President Bush.

Background: Peake is a veteran of the Vietnam War (where he was wounded and earned two Purple Hearts) and a retired U.S. Army lieutenant general. A thoracic surgeon, Peake would be the first physician and the first general to serve as VA secretary.

Also served as commanding general of the Madigan Army Medical Center, the largest medical training facility in the world.

Nomination: President Bush said he tapped Peake because of his expertise in combat medicine and health care management. One of Peake's first tasks will be implementing the recommendations of the Dole-Shalala Commission on Wounded Warriors. The panel offered guidance on topics including preventing and treating post-traumatic stress disorder and traumatic brain injury, as well as staffing Walter Reed Army Medical Center through 2011.

SOURCE: The Associated Press and the White House

Dr. James Peake, the retired Army general whom President Bush recently nominated to head the Department of Veterans Affairs, has a long and distinguished career. Among other things, he ran the Army's medical system until a few years ago, serving as Army surgeon general. But as people begin to review Peake's record, he's getting mixed reviews.

A retired Army general who worked closely with Peake in the Army's medical command has mixed feelings about the nomination. The general sat in meetings with Peake, and he brainstormed with him.

The general requested anonymity because he still works with the Army. "Jim doesn't take easily to criticism, and when I tell you honestly what I think of him, I could lose my job," he said.

Peake is the third man who Bush says will finally make things right for vets.

Since President Bush took office, two secretaries of Veterans Affairs have come and gone. Both men promised to make sweeping changes in the veterans' medical system, which just about everybody agrees is broken and overwhelmed. Both of them failed.

All of which are great attributes for the job. President Bush said pretty much the same thing when he introduced Peake at a press conference on Tuesday, saying, "He will apply his decades of expertise in combat medicine and health care management to improve the veterans' health system. He will insist on the highest level of care for every American veteran."

The retired general also said that Peake is conscientious and will try to do the right thing. He said Peake loves micromanaging details.

But the former colleague said Peake bogs down in details. He said the VA medical system is such a mess that it's going to take someone with sweeping vision to overhaul it — and Peake doesn't have that vision. In fact, the former colleague and some veterans' advocates say that Peake's myopia might have helped cause the crisis that soldiers faced when they came home from the war with serious mental health problems.

"That is clearly a failure," said Gary Myers, a former Army lawyer, now in private practice, who works on military cases.

Myers says it's important to remember that Peake was running the Army's medical system when the U.S. invaded Afghanistan, and he kept running it until 18 months after the U.S. invaded Iraq. By late 2003, Army researchers were telling Peake that large numbers of troops were having serious mental health problems, including post-traumatic stress disorder. An Army study, later published in the New England Journal of Medicine, warned that soldiers were reporting "important barriers to receiving mental health services."

Everyone from the press to a presidential commission found that when soldiers came back to America, the military's medical centers were overwhelmed. There was a huge shortage of mental health specialists. Soldiers couldn't get the treatment they needed, even when their lives were falling apart. So Myers wants senators to ask Peake at his confirmation hearings "why there wasn't an urgent effort to increase the number of mental health care providers in anticipation of the arrival of these young men and women," Myers said.

And of course, mental health wasn't the only problem. Some journalists were reporting back in 2003 that soldiers who came home with physical injuries were having a terrible time getting treatment, and were languishing in squalid barracks. Peake was in charge then, too.

NPR asked Peake for an interview, but a spokesman at the White House press office said he won't talk publicly until he testifies at his confirmation hearings.