Accessibility links
Still Waiting on Repairs, New Orleans Hosts 'Godot' When he visited New Orleans' abandoned neighborhoods in 2006, artist Paul Chan was reminded of the setting for the legendary play Waiting for Godot. With help from community organizations, Chan will stage the play in the city's hardest-hit areas. 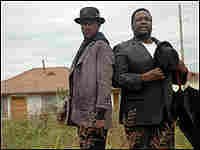 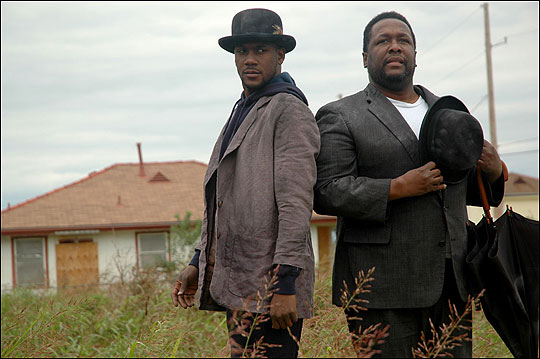 When Paul Chan visited New Orleans for the first time in 2006, the gutted houses, abandoned streets and bare trees reminded him of Samuel Beckett's legendary play Waiting for Godot.

"The sense of waiting is legion here," Chan said. "People are waiting to come home. Waiting for the levee board to OK them to rebuild. Waiting for Road Home money. Waiting for honest construction crews that won't rip them off. Waiting for phone and electric companies."

The artist and activist says the desolation in New Orleans inspired him to "create art in places where we ought not have any." This weekend, Chan's vision comes to fruition in the Lower Ninth Ward, where the New York public arts group Creative Time and the Classical Theater of Harlem are staging free, outdoor performances of Waiting for Godot. They will continue next weekend in the city's Gentilly neighborhood, in front of a flooded home.

Bringing the play to New Orleans was a collaborative effort. Chan met with The Classical Theater of Harlem, where Chris McElroen directed his version of Godot last year.

"We didn't want to do another Godot with a road and tree, so we decided to flood the road, and do it on top of rooftop, and if people made corollaries, then great," McElroen said.

McElroen hired actor and New Orleans native Wendell Pierce, perhaps best known as Detective "Bunk" on the HBO series The Wire, to play Vladimir. The Harlem play was staged above a 15,000-gallon pool of water, to strong reviews.

The New Orleans presentation of Waiting for Godot follows other versions staged in politically charged environments. In the 1950s and 1980s, prisoners at San Quentin performed the play. In South Africa in 1976, Godot suggested waiting for the end of apartheid. Susan Sontag staged it in Sarajevo in 1993, in the midst of war.

The show debuts this weekend in the Lower Ninth Ward and ends next weekend in Gentilly.

Eve Troeh is an independent producer based in New Orleans.

Waiting for Godot in New Orleans