Heidi Squier Kraft, author of a new memoir called Rule Number Two: Lessons I Learned in a Combat Hospital, served more than seven months as a clinical psychologist at a remote air base in western Iraq. 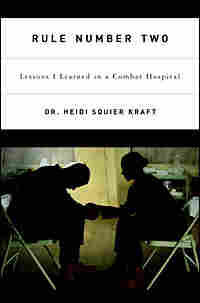 In this passage, Dr. Heidi Squier Kraft describes riding in an unarmored convoy between two air bases in western Iraq, just as U.S. Marines were laying siege to the city of Fallujah in April 2004. She recalls a patient she knew as Corporal Dunham, a badly injured Marine whom she helped resuscitate before he was airlifted from her field hospital.

We sped into the night. An ebony sky extended in every direction, and with each passing mile, new stars appeared. Starlight alone illuminated the road. Shuddering in the cold, I pulled my fleece face cover over my mouth and nose. I briefly considered gloves but decided against them when I imagined how slippery the wool would feel next to my pistol. Slippery was not good.

After the first half hour, I allowed myself to lean my head back, focusing on the muscles in my shoulders, which felt like rubber bands under tension. Had it only been twelve hours since that mass casualty? I scrunched my eyes shut, willing the tears to stay inside. Distracted by my trepidation about this convoy, I had not allowed myself time to think about Corporal Dunham. Or about that young lance corporal I had met early in the day as he recovered from surgery on our ward. I remembered the tattoos on his arms. One said USMC. And one, he told me, used to say SEMPER FI. After that day's car bomb had taken out most of his forearm, only the S and the E remained.

I remembered his tears and the way he swiped mercilessly at them. He felt fear. He felt shame that far outweighed the fear. He went on to explain that he had been in Iraq almost two months. This injury would earn him his third Purple Heart. He told me he was afraid his luck was about to run out.

He was ashamed to feel afraid.

I remembered struggling to form the words that would normalize this nineteen-year-old man's experience. And, using a therapeutic technique I made up as I went along, I consciously decided to take another path instead. I told him there was nothing normal about three Purple Hearts in two months. I told him there were no feelings that were usual for people in that situation. I told him he was going home. He laid his head on his pillow and sobbed without making a sound. I sat with him a long time. I thought of my Brian, only seventeen months old. I pictured myself lying in bed when the phone rang in the darkness. I physically experienced that sick, sinking sensation that must invade every mother's heart the moment she hears a shrill ring fracture the night. I thought of that lance corporal's mother. I thought of Corporal Dunham's mother. I bit my lip hard and tasted blood.

The roar of the Humvee's engine changed pitch, whining with the decrease in speed. My eyes flew open and I peered outside. Through tall, leaning shadows I discerned storefront buildings lining the road. Decrepit and broken, they reminded me of a movie set for an old Western. I remembered our Marines calling the Al Anbar province of Iraq "the Wild, Wild West."

Now I knew why.

My driver called back over his shoulder. "We're in Hit," he yelled, easing on the brake. A quiver shot through my chest. The street curved to the right in a half circle around a patch of dirt and a dead tree. The vehicles of our convoy sped up as they rounded the half circle and slowed as they left it. My pulse pounded in my fingertips pressed against the handle of my pistol. And then, maintaining that perfect interval between vehicles, our convoy stopped — in the middle of the highway. Our driver dismounted, telling us in a low voice to stay where we were. I remembered his instructions and turned my chest square to the fabric hatch, ensuring that my body armor faced outward. I rested the barrel of my pistol along the edge of the hole in my door.

I watched the lance corporal. He held his rifle at shoulder level, pointing it at the night, moving it slowly back and forth as he gazed through his goggles. I was glad the blackness in front of my eyes was not in front of his. Our vehicle had stopped beside a small dirt hill, overgrown with desert brush and weeds. Skinny trees peppered the landscape. I squinted past the mound, making out the shadow of a house in the lot behind it, four hundred feet off the road. All the lights were off. A dog barked in the distance. My driver froze, his rifle aimed just left of the hill. Moving only my eyes, I focused on his face, waiting for a move from him. The dog barked again. I heard the distinct crack of a twig under a boot and sucked in my breath. The barrel of my driver's rifle and of the rifles of the other men who stood on the road beside him moved in unison toward the sound.

Oh God, I thought. I cannot believe this is about to happen. I braced myself for an assault of gunfire. Four or five minutes passed in total silence. My lungs burned with every breath. Each swallow fought with my pounding heart for space to move down my throat. My eyes watered in the cold, dry air.

Suddenly the desert night was shattered by a tremendous boom. I ducked, lowering my helmet below the level of my window. In that same moment, I realized the source of the sound. They were Cobras, the Marine Corps' awesome attack helicopters. Their big, beautiful rotor blades chopped the air, flooding the night with thunder as they roared overhead. They flew tight circles over our convoy. Limp with relief, I crumpled at the waist, lowered my weapon to my lap, and rested my helmet on the door.

Our driver got back in the vehicle. The truck in front of us pulled away, and he followed. He yelled back at us, "Well, whoever that was out there, they're gone now." He grinned broadly as he looked upward out the windshield at the Cobras.

The muscles along my neck burned as if they'd been seared by an actual flame. I leaned my head so I could see the stars out the window, feeling the wind blast my face. This time I did not reach for my face warmer. My eyes began to water again, streaking my cheeks with cold tears — one after another, in that perfect interval.

Excerpted from Rule Number Two: Lessons I Learned in a Combat Hospital by Dr. Heidi Squier Kraft. Reprinted with permission by Little, Brown and Company. 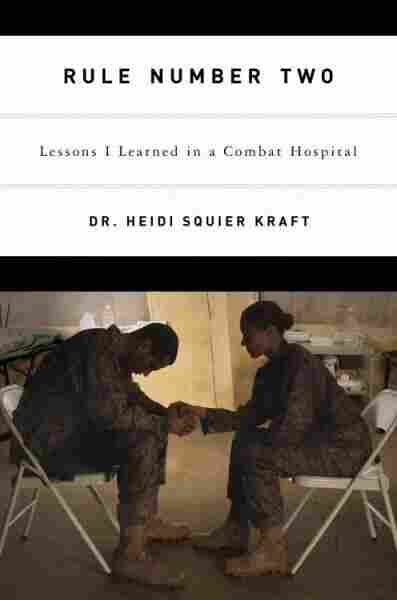 Lessons I Learned in a Combat Hospital