Accessibility links
A Sneak Peak of Karrin Allyson's Brazilian Jazz One of the most impressive jazz singers to emerge from the '90s, Karrin Allyson continues to wow audiences with her expressive voice. Her latest album, Footprints, earned her a Grammy nomination for Best Jazz Vocal Album. Hear an interview and performance recorded by KPLU.

Karrin Allyson in the Studio 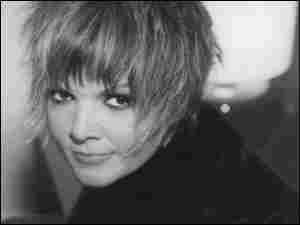 New York-based jazz singer, Karrin Allyson, is an old friend of KPLU. Early in her career we knew she was something special. We took every opportunity we could to get her into our studios and out in front of Seattle audience. Her first appearance for us was a summer afternoon jazz cruise on Puget Sound and, as we'd hoped, everyone aboard loved her. As I recall, she rounded out her first Seattle visit by performing for a couple of nights at a small downtown jazz club, which helped spread the word. By the time she left, the seed had been planted and Allyson fans in the Northwest began springing up like daisies. Now she visits Seattle at least once a year, performing for a week at a time at Jazz Alley, a nightclub which is considered by many among the jazzerati to be one of the best jazz performance venues in America.

Allyson's visits to the KPLU studios also resulted in a very special relationship between her and Dick Stein, one of KPLU's midday jazz hosts. Early on, Stein was one of the station's most fervent flag-wavers for her music, so he jumped at the chance to interview her on her first visit. The two of them (as well as everyone listening) had so much fun that it became a tradition: when Allyson comes to town, she pays Stein a visit. Now, when they get together for an interview, it's very much like being in the company of two old friends catching up with each other after having not seen each other for a long time However, in the interview you're about to hear, they decided to look to the future, rather than rehash the past.

At the time of this interview, Allyson had almost finished recording the material for a new CD, due to be released in February of 2008. Rather than give us live versions of some of our favorites from past CDs, she kindly consented to treat us to a sneak preview of her new project, which will consist almost entirely of Brazilian jazz. Once you hear Allyson apply her unique style to the songs "A Felicidade" and "Double Rainbow"' we think you'll be as eager as we are for the release of her next CD. And, for one little blast from the past, just because Stein requested it, she also gave us a superb rendition of Randy Newman's "Guilty," which she recorded back in '92 on her CD, I Didn't Know About You. Suffice it to say, she nailed it!