Accessibility links
Simone Dinnerstein: Variations on a Career When pianist Simone Dinnerstein became pregnant, she wanted to learn an appropriately momentous piece. She chose J.S. Bach's demanding Goldberg Variations, and the music helped lay the groundwork for both a new baby and a new career. 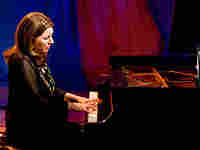 Eavesdrop on Dinnerstein in concert, with clarinetist Jose Franch-Ballester, at the Gardner Museum in Boston.

Kenji Bunch: 'Final Night in the House of Flamenco' 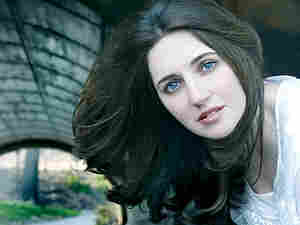 Pianist Simone Dinnerstein says that the way she plays Bach is close to her own personality. Lisa-Marie Mazzucco hide caption

Pianist Simone Dinnerstein finally has the glamorous concert career she once dreamed about as a kid. But the path she took to fulfill that dream hasn't been by the book.

She begged for piano lessons at age 4, but was given a recorder to play instead. At 15, Dinnerstein longed to study in London, but at her parents' request settled for Juilliard, just across the river from where she grew up in Brooklyn. She dropped out at 18.

After returning to finish Juilliard, Dinnerstein found herself in the same place as many young musicians after graduation—armed with technique and expectations, but few opportunities.

Eventually, after playing gigs at retirement communities, Dinnerstein took two big steps forward. She made her debut at Carnegie Hall's Weil Recital Hall, and made her own recording of J.S. Bach's Goldberg Variations. The self-produced disc found its way to a major label and was released earlier this year by Telarc Records. For a few "surreal" hours, as she recalls, Dinnerstein's CD was outselling Bruce Springsteen on Amazon.com's charts.

Dinnerstein grew up admiring Glenn Gould. Like that eccentric pianist, she decided to launch her career with one of the most demanding and iconic pieces of the keyboard literature: Goldberg Variations.

The inspiration for such a daring choice was born from necessity. Dinnerstein was pregnant and wanted a piece she could explore deeply.

"I wanted to learn a momentous piece of music to go along with this big life change that was about to happen to me," Dinnerstein says, "and the first piece that came to mind was the Goldberg Variations." Dinnerstein says it took her exactly nine months to learn the piece—a long time for her, she says.

Bach's hour-long Goldberg Variations — 30 ingenious transmutations on a gorgeous and melancholy "aria" that bookends the piece — is a challenge for even the finest pianists. Dinnerstein's approach, she admits, is deeply personal.

"The way I play it is close to my own personality. It's more inward-looking and meditative, and rhythmically free. I will even change the tempo slightly within the same variation. I think of these pieces as shapes of notes, and I don't feel that they all need to have the same rhythmic feeling."

Dinnerstein's own personal stamp is perhaps most obvious in the opening aria. It unfolds more slowly than usual. New York Times critic Anne Midgette describes it as "struggling to lift itself uncertainly out of silence."

Dinnerstein says she never plays the Goldberg Variations quite the same way each time.

"I feel like I need to go to a very deep place," Dinnerstein says. "It's exhausting. I need to mentally prepare myself before I start, because it comes out of a very silent place."