Accessibility links
Immigrant Struggles to Find Meaning in 'A Free Life' In his first novel set in America, critically acclaimed author Ha Jin explores the meaning of the American dream in A Free Life. In the aftermath of Tiananmen Square, his protagonist dreams of being a poet, but soon finds himself swamped in mortgage payments and obligations in suburban Atlanta.

Listen
Immigrant Struggles to Find Meaning in 'A Free Life' 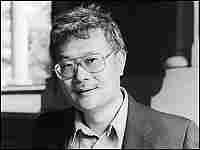 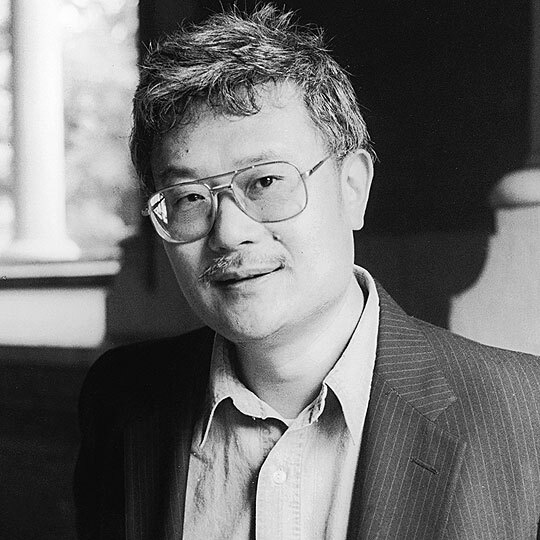 Ha Jin left his native China in 1985 to attend Brandeis University. A Free Life is his first novel set in America.

Read an excerpt about Nan Wu's reunion with his young son.

When author Ha Jin immigrated to the United States 22 years ago, he sought freedom from the aftermath of the Cultural Revolution and service in the Red Army.

In his new novel, A Free Life, Ha Jin sheds light on his years of struggle in America through his protagonist, Nan Wu. Highly acclaimed for his novels set in China, including War Trash, and Waiting,which won the National Book Award in 1999, his seventh work is set in America, where Nan Wu searches for meaning in a brutally commercial world.

Nan Wu dreams of being a poet, but after he drops out of a Boston graduate school in the aftermath of the Tiananmen Square massacre, his dream begins to fade amid mortgage payments and family obligations. He and his wife, Pingping, buy a Chinese restaurant in suburban Atlanta and settle in to fulfill the American dream. But they soon find that freedom in the U.S. comes at a price.

Ha Jin spoke to Jacki Lyden about some of the parallels with his own life in A Free Life. 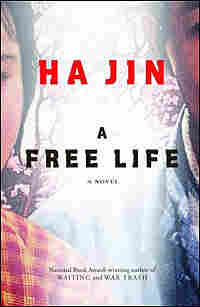 Finally Taotao got his passport and visa. For weeks his parents had feared that China, even if not closing the door outright, would restrict the outflow of people. After the Tiananmen massacre on June 4, 1989, all the American airlines except United had canceled their flights to Beijing and Shanghai. At the good news, Pingping burst into tears. She quickly rinsed the colander in which she had drained the shredded turnip for her jellyfish salad, took off her apron, and set out with her husband, Nan Wu, for the town center of Woodland, where the office of Travel International was located.

The plane ticket cost seventy percent more than the regular fare because it had not been purchased three weeks in advance. The Wus didn't hesitate; as long as Taotao could get out of China in time and safely, it was worth any price. They also bought round-trip tickets from Boston to San Francisco for themselves.

Neither Pingping nor Nan could go back to China to fetch Taotao, who had been staying with Pingping's parents for the past three years. And since no one in Pingping's family had a passport—not to mention the difficulty in getting a visa from the U.S. embassy — the boy would have to fly by himself. Pingping's brother, a middle school physics teacher who had just returned to their parents' home for the summer vacation, had agreed to take his nephew from Jinan City to Shanghai. There Taotao would be left in the hands of the American flight attendants. Barely six, he wasn't allowed to change planes unaccompanied, so his parents would have to go and collect him in San Francisco. The travel agent, a bosomy brunette with olive skin and long hair, helped Nan make a reservation for the least expensive room at a hotel near Union Square, where the three of them would stay the first night before flying back to Boston. Altogether the trip would cost them close to $3,000. Never had they spent money so lavishly.

They arrived in San Francisco in the early morning of July 11. They hadn't expected it to be so chilly; nippy gusts were ruffling pedestrians' hair and forcing people to squint. A storm had descended the night before, leaving shop signs tattered and soggy; a few traffic lights were out of order, blinking endlessly. But the ebony facades of some buildings had been washed clean and glossy, and the vigorous wind smelled of the ocean. Pingping, without any warm clothes on, couldn't stop shivering and then began hiccupping violently on their way to the hotel. Nan tried massaging the nape of her neck to relieve her spasms, and once or twice he slapped her back in an attempt to shock her out of them. This trick had worked before, but it didn't help today.

Nan had called United Airlines twice to find out whether Taotao was actually on the plane, but nothing could be confirmed. He was told that the boy's name didn't come up in the computer. Things were still chaotic in China, and many passengers had been switched to this flight from other airlines that had canceled their services, so there wasn't a complete passenger list yet. "Don't worry, Mr. Wu," a pleasant female voice consoled Nan. "Your son should be all right."

"We were told zat he is on zer plane." Nan often mismanaged the interdental sound that the Chinese language doesn't have.

"Then he should be."

"Do you have anozzer way to check zat?"

But between "should be" and "is" stretched a gulf of anguish for the boy's parents. If only they knew where their son actually was!

Nan's brother-in-law had said on the phone that he left Taotao with a group of American air stewardesses, one of whom was an Asian and could speak a little Mandarin. Now the Wus just hoped he was on the plane.

Three hours after they had checked into the hotel, they returned to the airport by a shuttle bus. The plane wasn't supposed to arrive until 12:30. Since it was an international flight, the Wus were not allowed to enter the restricted terminal. All they could do was stand outside customs, staring at the chestnut-colored gate that seemed resolved to remain shut forever. Several times they asked the people at the information desk whether Taotao was on the plane, but nobody could tell them that for certain. A thin, broad-faced woman in a dark blue uniform appeared. She looked Chinese but spoke only English. Hoping there might be another way to find out their son's whereabouts, they asked her to help. Her round-chinned face stiffened. She shook her head and said, "If that lady at the desk can't do anything for you, I can't either."

Distraught, Pingping begged her in English, "Please check it for us. He is our only child, just six year old. Three years I didn't see him."

Nan wanted to plead with her too, but the woman looked annoyed, so he refrained. In her eyes, which had more white than black, Nan had caught a flicker of disdain, probably because she knew they were from mainland China and suspected they were still red inside, if not red to the bone.

He wrapped an arm around Pingping, whispering in Chinese, "Let's wait a little longer. I'm sure he'll come out soon. Don't worry in advance." Between themselves they spoke Mandarin.

The way his wife had begged that woman upset him. Pingping, though thirty-three, looked almost ten years younger than her age, with large vivid eyes, a straight nose, a delicate chin, and a lissome figure. Perhaps that woman was jealous of her pretty features and liked seeing her in agony.

At last the gate opened and spat out a string of passengers. Most of them looked exhausted, their eyes dull and inert, and several walked unsteadily, pulling wheeled suitcases or lugging bags. The Wus stepped closer and gazed at the new arrivals. One by one the passengers went by. A tall black man in a baggy blazer cried, "Hey, Toni, so great to see you!" He stretched out his right arm, a dark canvas ukulele case hanging from his left shoulder. Toni, a skinny girl wearing a nose stud and a full head of cornrows, buried her face in his one-armed hug. Except for that cheerful moment, though, most passengers seemed groggy and dejected. Some of the Asians seemed uncertain what to do, and looked around as if wondering who among those standing by were supposed to receive them.

Within five minutes all the new arrivals had cleared customs. Slowly the gate closed. A chill sank into Nan's heart; Pingping broke into sobs. "They must have lost him! I'm sure they lost him!" she groaned in Chinese, holding her sides with one arm. Tugging Nan's wrist, she went on, "I told you not to let him take the risk, but you wouldn't listen."

"He'll be all right, believe me." His voice caught, unconvincing even to himself.

The hall was hushed again, almost deserted. Nan didn't know what do. He said to Pingping, "Let's wait a little more, all right?"

"There was only one flight from China today. Don't lie to me! Obviously he was not on it. Oh, if only we had let him wait until somebody could bring him over. We shouldn't have rushed."

Then the gate opened again. Two stewardesses walked out, the tall one, a blonde, holding a young boy's hand while the other one, slight and with smiling eyes, was carrying a small red suitcase. "Taotao!" Pingping cried, and rushed over. She swooped him up into her arms and kissed him madly. "How worried we were! Are you all right?" she said.

The boy in a sailor suit smiled, whimpering "Mama, mama" while pressing his face against her chest as if shy of being seen by others. He then turned to Nan, but his face registered no recognition.

"This is your daddy, Taotao," his mother said.

The boy looked at Nan again and gave a hesitant smile, as if his father were a bigger friend being introduced to him. Meanwhile, Pingping went on kissing him and patting his back and stroking his head.

The two stewardesses asked for Nan's ID, and he produced his driver's license. They compared his name with their paperwork, then congratulated him on the family's reunion.

"He was fine on the plane, very quiet, but a little scared," said the short woman, who looked Malaysian. She handed Nan the suitcase.

He held it with both hands. "Sank you for taking care of him on zer way."

"Our pleasure," said the blonde, who wore mascara and had permed hair, her face crinkling a little as she smiled. "It's wonderful to see a family reunited."

Before Pingping could say anything, the women left as if this were their routine work. "Thank you!" she cried at last. They turned their heads and waved at her, then disappeared past the gate.

Excerpted from A Free Life by Ha Jin Copyright © 2007 by Ha Jin. Excerpted by permission of Pantheon, a division of Random House, Inc. All rights reserved. No part of this excerpt may be reproduced or reprinted without permission in writing from the publisher. 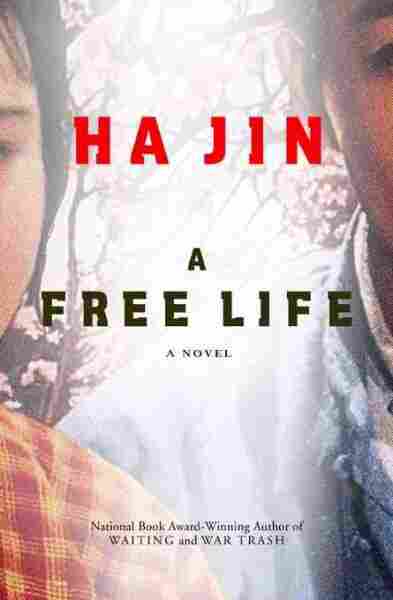