From 'The Barber of Seville' 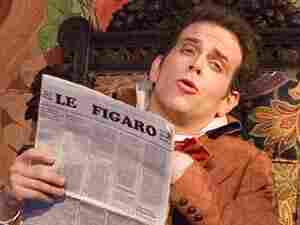 The wily barber called Figaro is the title character in two great operas, Mozart's The Marriage of Figaro and Rossini's The Barber of Seville. Both composers found the character in plays by Beaumarchais, and Rossini's opera tells the first part of Figaro's story. Figaro introduces himself with "Largo al factotum," a number that's often called, simply, "The Figaro Aria." It's a boastful and buoyant aria in which Figaro explains exactly why he's the most famous barber in Seville, and it gives the singer a chance to show off his fast-talking, "patter" technique. In the Glimmerglass Opera production of Rossini's Barber, the title character is sung by Aaron St. Clair Nicholson, who begins his big aria while circling the stage on a bicycle!