Accessibility links
Large Women in the Lens of Leonard Nimoy Actor, director and photographer Leonard Nimoy talks about his new book, The Full Body Project. The book is a collection of nude photographs of very full bodied women. Nimoy speaks with Scott Simon.

Listen
Large Women in the Lens of Leonard Nimoy

Actor, director and photographer Leonard Nimoy talks about his new book, The Full Body Project. The book is a collection of nude photographs of very full bodied women. Nimoy speaks with Scott Simon.

If I'm not the first, I don't think I'll be the last to observe that Leonard Nimoy has boldly gone where no photographer has gone before. Mr. Nimoy has been an active and accomplished photographer for years. He's produced an exhibit of photographs that's just been published as a book, "The Full Body Project."

His camera subjects are huge women, not simply plus-size models but obese - and they are photographed nude. They are not shy or self-conscious. The women are members of a group called The Fat-Bottom Revue. And, as Mr. Nimoy says, they are proud of their own skin. Indeed, they smile, laugh and often lock eyes with the camera.

Leonard Nimoy joins us now from the studios of WFCR in Amherst, Massachusetts.

Mr. Nimoy, thanks so much for being with us.

SIMON: You note this book for the photography teacher who once told you to do what scares you. Now, your respect for these women notwithstanding, was that part of your fascination with this?

Mr. NIMOY: Actually, it began with an individual lady who came to me after a presentation I was doing. It was a seminar of some previous work. And she said to me you're working with a particular body-type model, which was true at the time. She said, I'm not of that type; I'm of a different body type. Will you be interested in working with me? And she was a very, very large lady. And this was in Northern California - I have a home up there - and we invited her to our studio in the home and photographed her there.

And that was the first time I had photographed a person of that size and shape, that kind of body type, and it was scary. I was uncomfortable, nervous - my wife was there to help. I was not sure exactly how to go about it or whether I would do her justice. I didn't know quite how to treat this figure.

And I think that's a reflection of something that's prevalent in our culture. I think, in general, we are sort of conditioned to see a different body type as acceptable and maybe look away when the other body type arrives. It was my first introduction of that kind of work. And when I showed some of that work, there was a lot of interest. And it led me to a new consciousness about the fact that so many people live in body types that are not the type that's being sold by fashion models.

SIMON: Who, in fact, are these women you photographed from the Fat-Bottom Revue?

Mr. NIMOY: They are group of women in San Francisco that I found after I had photographed this first lady and found this interest. I decided to explore the territory and found this group, a group that was formed by a lady named Heather MacAllister, who unfortunately has passed away. She was a cancer patient, which I did not know at the time. But we - I photographed them twice - once in San Francisco and once again at the Hammer Museum in Los Angeles. They are women who are of a larger body type who have other professions, but who come together to do this dance revue in doing burlesque.

Heather MacAllister, who formed the group, was an anthropologist by training. And during one of our sessions, I said to her, what are you doing with your anthropological training? And she said, I'm doing this, meaning this Fat-Bottom Revue. And she went on further to say, whenever a fat person steps on stage to perform, and it's not the butt of a joke, that's a political statement. And I found that quite profound.

SIMON: There's a delightful picture in there of the women dancing in a circle, and they do look like they're having an awful lot of time. Do you remember taking that?

Mr. NIMOY: They were. They were. They brought music with them, and when the music - when they turned on their music they started to move. I couldn't get them to stand still.

Mr. NIMOY: They're very responsive to music, and it shows in the pictures. You're right. The circle dance's intentionally based on a Matis painting. He had a circle of dancers essentially that part was when I said - I showed them the picture, I said this is what we're replicating here, and they did it joyfully, and it's in the book.

SIMON: Cultural questions aside, there's been some publicity over these past couple of years, in particular past couple of fashion seasons, about the dangers of overly slender models…

SIMON: …that trend(ph), and I have to note there is, as you know, I'm certain, a study that just came out this week that suggests a link between obesity and cancer.

Mr. NIMOY: I'm aware of that. I just became aware of it in the last two or three days. I haven't seen the science, I haven't seen the information on it, and I'm obviously will be looking into it very carefully and with great interest. I'm also aware that there are studies that tell us that stress and lack of self-image, lack of self-esteem, severe dieting, binge dieting and binge eating can also be very damaging to a body and bring on various kinds of abnormalities. So one wonders if there is a counterbalance to this issue, I don't know. I'm not a scientist, I don't plan to know.

SIMON: Would you permit us a "Star Trek" question?

SIMON: You're going to be in the next right "Star Trek" movie, right?

SIMON: But William Shatner is not going to be.

Mr. NIMOY: No. No. It's - that's true. Actually, people seemed to forget or maybe Bill forgets that his character died in three or four movies back.

Mr. NIMOY: Well, yes. But - yes, but I managed resurrection.

Mr. Nimoy, a pleasure talking to you. Thank you so much.

Mr. NIMOY: Always a pleasure to talk to you all night. Thank you, Scott. 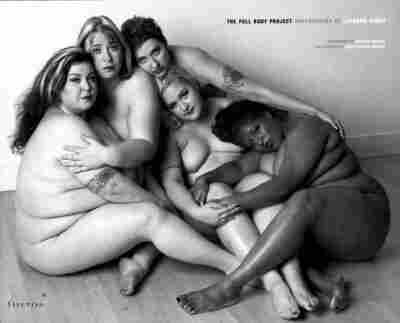