Accessibility links
Waterboarding: An Issue Before Mukasey's Bid Michael Mukasey is now all but sure of winning Senate confirmation as attorney general. But Mukasey's nomination was almost derailed by his refusal to say whether he views the interrogation practice known as "waterboarding" as torture. The episode is only the latest in waterboarding's long history of controversy.

Michael Mukasey is now all but sure of winning Senate confirmation as attorney general. But Mukasey's nomination was almost derailed by his refusal to say whether he views the interrogation practice known as "waterboarding" as torture. The episode is only the latest in waterboarding's long history of controversy.

Host Jacki Lyden takes a step back from the week's events to look at the history of waterboarding with Darius Rejali, a professor at Reed College. 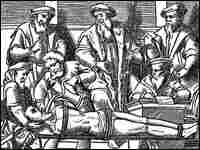 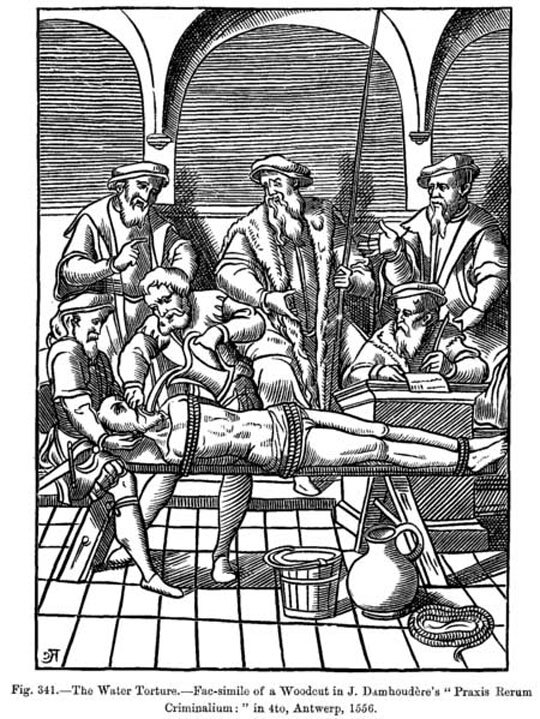 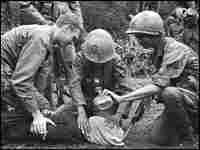 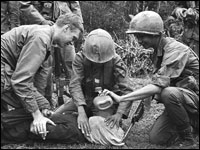 U.S. soldier in Vietnam supervises the waterboarding of a captured North Vietnamese soldier. 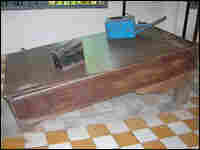 A waterboard and blue watering can used by the Khmer Rouge at Tuol Sleng prison in Phnom Penh, Cambodia. Jonah Blank hide caption 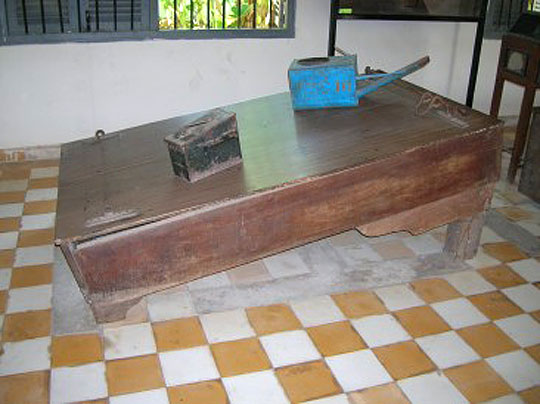 A waterboard and blue watering can used by the Khmer Rouge at Tuol Sleng prison in Phnom Penh, Cambodia.

What does waterboarding feel like? The most detailed descriptions come from eyewitness accounts and court records from wars past.

During the 1947 trial of Japanese war criminal Chinsaku Yuki, one of his victims, Ramon Navarro, described being subjected to waterboarding. "Not so painful," he said, "but one becomes unconscious — like drowning in the water." Read a transcript of Navarro's testimony.

Yuki placed some cloth on my face. And then with water from the faucet, they poured on me until I became unconscious. He repeated that four or five times.

The surprisingly contentious confirmation process of Michael Mukasey, President Bush's pick for attorney general, has come down to one issue: waterboarding. Mukasey has called waterboarding personally "repugnant," but said he did not know enough about how it has been used to define it as torture.

The Washington debate over the simulated-drowning technique may be new, but the practice is not. It predates the Inquisition and has been used, off and on, around the world ever since.

Its use was first documented in the 14th century, according to Ed Peters, a historian at the University of Pennsylvania. It was known variously as "water torture," the "water cure" or tormenta de toca — a phrase that refers to the thin piece of cloth placed over the victim's mouth.

At the time, using water to induce confessions was "a normal incident of law," Peters says, and people viewed it more or less as we view a cross-examination today. If anything, Peters says, the Inquisitors "were more careful about it" than others of their time.

"They were professionals," Peters says, noting that a doctor's presence was required during interrogations. Not that it made the experience any more pleasant for the victim, of course.

"The patient strangled and gasped and suffocated and, at intervals, the toca was withdrawn and he was adjured to tell the truth. The severity of the infliction was measured by the number of jars [of water] consumed, sometimes reaching to six or eight," writes Henry Charles Lea in A History of the Inquisition of Spain.

"The thing you could not do in torture was injure the body or cause death," Peters says. That was — and still is — what makes waterboarding such an attractive interrogation technique, he says: It causes great physical and mental suffering, yet leaves no marks on the body.

Waterboarding actually refers to two different interrogation techniques. One involves pumping water directly into the stomach. "This creates intense pain. It feels like your organs are on fire," says Darius Rejali, a professor at Reed College in Oregon and author of a new book, Torture and Democracy.

The other technique — the one more widely used today — involves choking the victim by filling their throat with a steady stream of water — a sort of "slow-motion drowning" that was perfected by Dutch traders in the 17th century. They used it against their British rivals in the East Indies.

A turning point for waterboarding — in any form — came around 1800. As the Enlightenment swept across Europe, many countries banned the practice and people, in general, found it "morally repugnant," Peters says. Waterboarding moved underground, but did not disappear by any means. In fact, it has experienced something of a revival in the 20th century.

The interrogation method was used by the Japanese in World War II, by U.S. troops in the Philippines and by the French in Algeria. In Cambodia, the Khmer Rogue used waterboarding against its own people. The British used it against both Arabs and Jews in occupied Palestine in the 1930s. In the 1970s, it was widely used in Latin America, particularly under the military dictatorships in Chile and Argentina (where it was known as "Asian torture.")

Details are hard to come by, since no government will openly acknowledge using the interrogation method. Over the years, the technique has been modified slightly. The Japanese, for instance, used teapots to hold the water, and cellophane is sometimes used instead of a cloth. But waterboarding has changed very little in the past 500 years. It still relies on the innate fear of drowning and suffocating to coerce confessions.

Waterboarding reached the U.S. via a circuitous route. The Spanish exported the practice to the Philippines, which they colonized for centuries. It was then adapted by U.S. forces there at the start of the 20th century and, eventually, adopted by some police forces in the U.S.

During the Spanish-American War, a U.S. soldier, Major Edwin Glenn, was suspended from command for one month and fined $50 for using "the water cure." In his review, the Army judge advocate said the charges constituted "resort to torture with a view to extort a confession." He recommended disapproval because "the United States cannot afford to sanction the addition of torture."

Yet President Theodore Roosevelt defended the practice. "The enlisted men began to use the old Filipino method: the water cure," he wrote in a 1902 letter. "Nobody was seriously damaged."

In the war crimes tribunals that followed Japan's defeat in World War II, the issue of waterboarding was sometimes raised. In 1947, the U.S. charged a Japanese officer, Yukio Asano, with war crimes for waterboarding a U.S. civilian. Asano was sentenced to 15 years of hard labor.

"All of these trials elicited compelling descriptions of water torture from its victims, and resulted in severe punishment for its perpetrators," writes Evan Wallach in the Columbia Journal of Transnational Law.

On Jan. 21, 1968, The Washington Post ran a front-page photo of a U.S. soldier supervising the waterboarding of a captured North Vietnamese soldier. The caption said the technique induced "a flooding sense of suffocation and drowning, meant to make him talk." The picture led to an Army investigation and, two months later, the court martial of the soldier.

Cases of waterboarding have occurred on U.S. soil, as well. In 1983, Texas Sheriff James Parker was charged, along with three of his deputies, for handcuffing prisoners to chairs, placing towels over their faces, and pouring water on the cloth until they gave what the officers considered to be confessions. The sheriff and his deputies were all convicted and sentenced to four years in prison.

Waterboarding may be widespread, but it has not been used everywhere. There's no evidence that either the Nazis or the Soviets used the technique, Rejali says. These regimes, he says, weren't concerned about public opinion, and so they often used harsher methods that left permanent scars or killed their victims. If anything, Rejali says, waterboarding has been an interrogation technique preferred by the world's democracies.

Stephen Rickard, Washington director of the Open Society Institute, says that throughout the centuries, the justifications for using waterboarding have been remarkably consistent.

"Almost every time this comes along, people say, 'This is a new enemy, a new kind of war, and it requires new techniques,'" he says. "And there are always assurances that it is carefully regulated."