Accessibility links
Musharraf Suspends Constitution, Sparks Unrest Pakistan President Pervez Musharraf, is suspending the constitution and detaining political rivals. Declan Walsh, of London's Guardian newspaper, talks to about the president's actions from Islamabad, where police and protestors have clashed in the streets.

The president of Pakistan, Pervez Musharraf, is suspending the constitution and detaining political rivals. Declan Walsh, of London's Guardian newspaper, talks to Madeleine Brand about the president's actions. Walsh is based in Islamabad, where police and protestors have clashed in the streets. 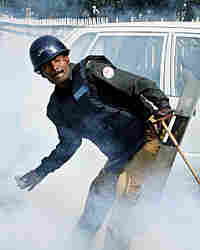 A Pakistani policeman throws a tear-gas shell toward lawyers during a protest in Lahore on Monday. Arif Ali/AFP/Getty hide caption 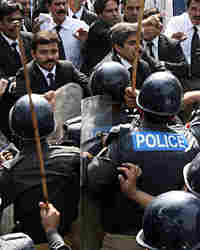 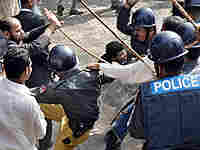 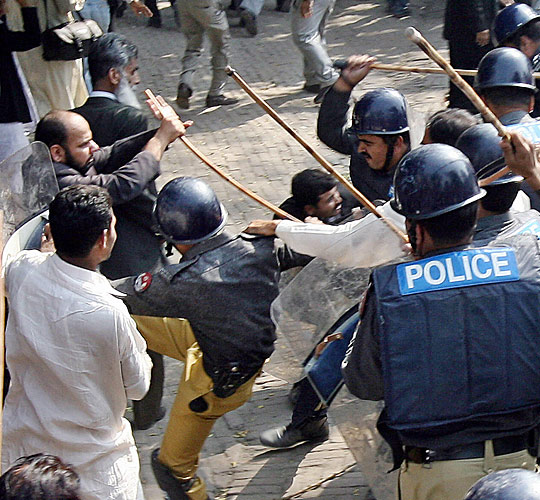 Pakistani riot police baton-charge lawyers during a protest in Lahore on Monday.

Baton-wielding police in Pakistan fired tear gas into crowds and arrested hundreds of anti-government protesters in an effort to quash dissent following President Gen. Pervez Musharraf's declaration of a state of emergency.

In the eastern city of Lahore, which has been a hotbed of anti-Musharraf sentiment, about 2,000 lawyers at the High Court tried to exit onto the main road to stage a rally in defiance of police warnings. Security forces swung batons and fired tear gas canisters to disperse the lawyers, who responded by throwing stones and beating police with tree branches as they shouted "Go Musharraf Go!"

Clashes were also reported in Karachi and Multan as lawyers in major cities attempted to stage protests against what many have termed martial law but what the government has been careful to describe as a temporary state of emergency. In an address to the nation Saturday, Musharraf said the move was a response to a growing militant Islamic movement and a court system that hindered his powers.

Musharraf, who took power in a 1999 coup, suspended the constitution and shut down all but state-run media despite the urging of Washington, D.C., and other Western allies against authoritarian measures. The emergency declaration has deepened Pakistan's political uncertainty. Musharraf's government said Sunday that parliamentary elections could be delayed for up to a year.

Alarmed by events, Secretary of State Condoleezza Rice said the Bush administration was reviewing its aid to nuclear-armed Pakistan, a key U.S. ally in the fight against al-Qaida and the Taliban in neighboring Afghanistan and along the unstable border between the two Islamic countries. At stake is about $11 billion from Washington. Britain also said it was examining its assistance.

"Some of the aid that goes to Pakistan is directly related to the counterterrorism mission," Rice told reporters on a trip to the Middle East. "We just have to review the situation." But she said she did not expect the U.S. "to ignore or set aside our concerns about terrorism."

On Sunday, former Pakistan Prime Minister Benazir Bhutto told NPR that leaders of her opposition Pakistan People's Party were being rounded up in the wake of Musharraf's decree.

Bhutto, who in recent weeks has unsuccessfully sought a power-sharing deal with Musharraf, told Weekend Edition Sundaythat she was "disappointed" with Musharraf and deeply concerned about the situation. She also expressed surprise that she herself had not been arrested.

"He said he's done this to stop extremism. But many people in Pakistan believe that this has actually been done to stop the Supreme Court from giving an adverse order against his eligibility to remain as army chief and president of the country," Bhutto told NPR.

Another former Pakistan prime minister, Nawaz Sharif, interviewed on NPR's All Things Considered, said that Pakistan was on the "brink of disaster."

"One man is holding the whole nation hostage," Sharif said.